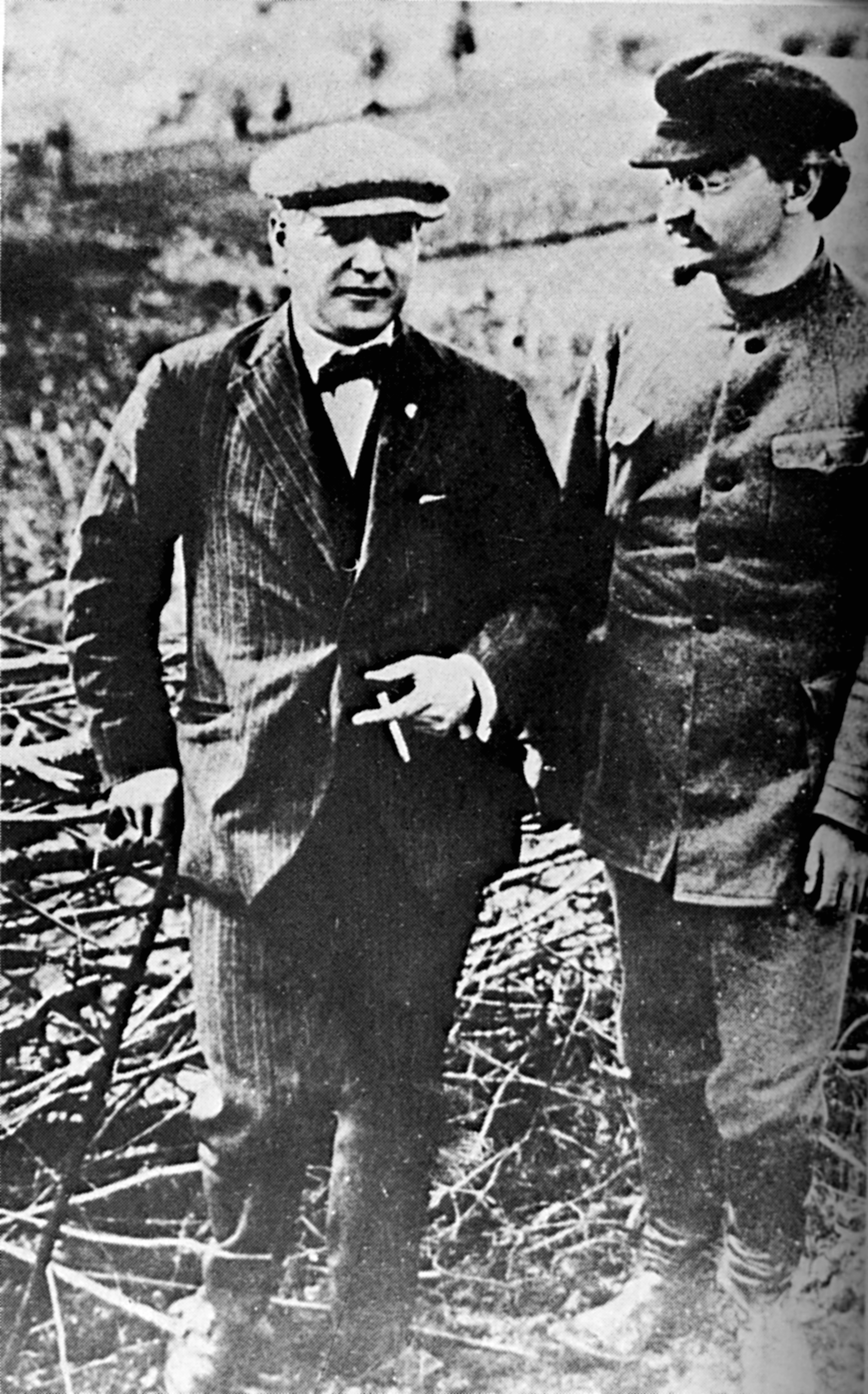 (left, Christian Rakovsky with Leon Trotsky c. 1924. Trotsky, an agent of the Cabalist Jewish central bankers was supposed to succeed Lenin but Stalin beat him to it.)

In 1938, Illuminati insider Christian Rakovsky confirmed that the central bankers’ goal is worldwide Communism, i.e. The New World Order.  “There is only one aim, one single aim: the triumph of Communism. It is not Moscow which will impose its will on the democracies but New York, not the “Comintern” but the “Capintern” on Wall Street.”
The “Left”, Organized Jewry, and Freemasonry are all instruments of this agenda.

Related– We Have De Facto Communism  and Bella Dodd: The NWO is Communism

This is a series of three key articles. They are in Cruel Hoax but not in the Illuminati trilogy.

The 50-page transcript of his interrogation dubbed The Red Symphony was not meant to become public. The transcriber made an unauthorized carbon.

This is perhaps the most explosive political document in modern history. It reveals why the Illuminati created Hitler and then sought to destroy him, and why Stalin made a pact with Hitler in 1939.

Christian Rakovsky was a veteran Communist insider facing execution for plotting to overthrow Stalin. Born Chaim Rakover in 1873, he studied medicine in France before becoming a revolutionary. He was the leader of a terror group that attacked government officials.

In 1919, Lenin put him in charge of the Soviet Ukraine government. He retained the territory for the Bolsheviks during the Civil War 1917-1922. Stalin appointed him Russian ambassador to Paris in 1925.

Rakovsky belonged to the powerful Trotskyite faction that took their orders from the Rothschilds. Many of this group were shot in Stalin’s 1937 Communist Party purge.

The circumstances of the midnight interrogation Jan. 26, 1938 were very dramatic.

What could Rakovsky possibly say to save his life? 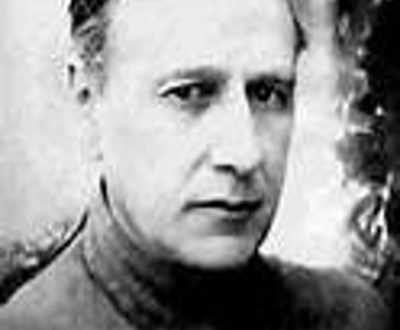 Rakovsky appears to use the tactic of “deceiving with the truth.” He wins trust by revealing the truth but leaves some out. He impresses his interrogator that he and Trotsky represent an invincible power he calls the “Capitalist-Communist Financial International.”

He confirms that the “revolutionary movement” was designed to enlist support by pretending to serve mankind’s moral and collective ideals. The real aim, however, is to give total world power to the bankers by dividing society and undermining established authority.

“Christianity is our only real enemy since all the political and economic phenomena of the bourgeois states are only its consequences,” Rakovsky, says. (All page citations from Griffin, Fourth Reich of the Rich, 1988, p. 264)

Peace is “counter-revolutionary” since it is war that paves the way for revolution.

Rakovsky, whose tongue was loosened by a mild inebriant in his wine, refers to the Illuminati as “they” or “them.” He is a member although not part of the inner circle.

He explains that the “Illuminati” is a Masonic secret society dedicated to Communism. Significantly, its founder Adam Weishaupt took the name from “the second anti-Christian conspiracy of that era, Gnosticism.” (249)

The interrogator was one of Stalin’s cleverest agents, Gavril Kus’min known as “Gabriel.”

Apart from a sound technician, a doctor Jose Landowsky was the only other person present.

Conscripted by the NKVD to help “loosen the tongues of detainees,” Dr. Landowsky was sickened by the many tortures he witnessed.

The interrogation of Rakovsky, however, was cordial. Dr. Landowsky doubts if the mild euphoric had much effect.

The interrogation, conducted in French lasted from midnight until 7 a.m. Afterward, Kus’min ordered Landowsky to translate the interview into Russian and make two copies.

The content was so mind-boggling that Landowsky made an additional carbon for himself. “I am not sorry that I had the courage for this,” he wrote. (279) The Bolsheviks had shot Landowsky’s father, a Tsarist colonel, during the 1917 revolution.

A Spanish Fascist volunteer later found the manuscript on Landowsky’s dead body in a hut on the Petrograd front during World War Two. He took it back to Spain where it was published as “Sinfonia en Rojo Mayo.” in 1949.

The complete text of “The Red Symphony” was put online by Peter Myers.

The transcript was published in English in 1968 as “The Red Symphony: X-Ray of Revolution.”

Rakovsky gives his interrogator an astonishing inside view of modern history in order to prove that the Illuminati control the world.

“Money is the basis of power,” Rakovsky says, and the Rothschilds manufacture it thanks to the banking system.

The “Revolutionary Movement” was an attempt by Meyer Rothschild and his allies to protect and extend this monopoly by establishing a totalitarian New World Order.

According to Rakovsky, “The Rothschilds were not the treasurers, but the chiefs of that first secret Communism…Marx and the highest chiefs of the First International … were controlled by Baron Lionel Rothschild, [1808-1878] whose revolutionary portrait [“Sidonia”] was done by Disraeli the English Premier, who was also his creature, and has been left to us [in Disraeli’s novel ‘Coningsby.’]” (250)

Lionel’s son Nathanael (1840-1915) needed to overthrow the Christian Romanoff Dynasty. Through his agents Jacob Schiff and the Warburg brothers, he financed the Japanese side in the Russo Japanese War and an unsuccessful insurrection in Moscow in 1905. Then he instigated the First World War (Trotsky was behind the murder of Archduke Ferdinand) and financed the 1917 Bolshevik Revolution. Rakovsky says he was personally involved in the transfer of funds in Stockholm. (251-252)

The Jewish labor movement or “Bund” was Rothschild’s instrument. The Bund’s “secret faction” infiltrated all the socialist parties in Russia and provided the leadership for the Russian Revolution. Alexander Kerensky, the Menshevik Prime Minister was a secret member. (253)

Leon Trotsky was supposed to become the leader of the USSR. Trotsky, a Jew, married the daughter of one of Rothschild’s closest associates, banker Abram Zhivotovsky and became part of the “clan.”

Unfortunately “national” Communists like Lenin (one-quarter Jewish) got in the way. Lenin overruled Trotsky and made peace with Germany (Treaty of Brest Litovsk, 1918.) This was not the Rothschild’s plan.

Trotsky was responsible for an attempt to assassinate Lenin in 1918 but Lenin survived. When Lenin had a stroke in 1922, Trotsky had Levin, Lenin’s Jewish doctor, finish him off.

At this critical moment, the unexpected happened. Trotsky got sick and Stalin was able to take power. At this crucial juncture, the Trotskyites pretended to support Stalin and infiltrated his regime in order to sabotage it.

Rakowsky characterizes Stalin as a “Bonapartist,” a nationalist as opposed to an International Communist like Trotsky who served the banker agenda.

“He is a killer of the revolution, he does not serve it, but makes use of its service; he represents the most ancient Russian imperialism, just as Napoleon identified himself with the Gauls…” (257)

In order to control Stalin, international finance was forced to build up Hitler and the Nazi party. Rakowsky confirms that Jewish financiers backed the Nazis although Hitler supposedly was not aware of this.

“The ambassador Warburg presented himself under a false name and Hitler did not even guess his race… he also lied regarding whose representative he was… Our aim was to provoke a war and Hitler was war…[the Nazis] received…millions of dollars sent to it from Wall Street, and millions of marks from German financiers through Schacht; [providing] the upkeep of the S.A and the S.S. and also the financing of the elections…” (259-260)

Unfortunately for the bankers, Hitler also proved intractable. He started to print his own money!

“He took over for himself the privilege of manufacturing money and not only physical moneys, but also financial ones; he took over the untouched machinery of falsification and put it to work for the benefit of the state… Are you capable of imagining what would have come …if it had infected a number of other states and brought about the creation of a period of autarchy [absolute rule, replacing that of the bankers.] If you can, then imagine its counterrevolutionary functions…” (263)

Hitler had become a bigger threat than Stalin, who had not meddled with money. Rakovsky’s present mission was to convince Stalin to make a pact with Hitler and turn Hitler’s aggression against the West. The purpose was for Germany and the Western nations to exhaust each other before second front was opened in the East.

[According to Walter Kravitsky, the head of Soviet Military Intelligence in Europe who defected to the West and was later assassinated in 1941, Stalin was determined to make a pact with Hitler as early as 1934. He had no desire to fight the Nazis. Is it possible Rakovsky and his sponsors did not know this? Kravitsky, On Stalin’s Secret Service (1939)]

Rakovsky urged the Russians to use the tactic of “deceiving with the truth.” The Russians were to impress Hitler with their genuine desire for peace. Hitler was not to suspect that he was being set up for a war on two fronts.

Stalin was given a choice. If he agreed to divide Poland with Hitler, the West would declare war on only one aggressor, Germany. If he refused, the bankers would allow Hitler to depose him.

Kus’min demanded some high-level confirmation. Rakovsky told him to see Joseph Davies, the US ambassador in Moscow, a fellow Freemason, and representative of the International Communist Roosevelt administration.

Someone was sent to Davies who confirmed that “much would be gained” if Rakovsky got an amnesty. On March 2, 1938, a powerful radio message was sent to Moscow in the cipher of its London embassy. “Amnesty or the Nazi danger will increase,” it said. Davies attended Rakovsky’s trial and gave him a Masonic greeting. On the same day, March 12, 1938, Hitler marched into Austria.

Rakovsky’s death sentence was commuted. Some believe he lived out his years under an assumed name. Another source has him shot in 1941.

Secret negotiations were begun with Hitler. The result was the Ribbentrop-Molotov pact signed in August 1939 just one week before the invasion of Poland.

The interrogation seems to have created an accord between Stalin and the Illuminati.

Rakovsky told Kus’min that the Illuminati never take political or financial positions. They use “intermediaries.”

“Bankers and politicians are only men of straw…. even though they occupy high places and appear to be authors of the plans which are carried out…” (248-249)