KRAKOW, Poland — Oskar Schindler shielded 1,200 Jewish factory workers during the Holocaust and a Hollywood movie about the heroic rescue has turned his name into the archetype for a Righteous Among the Nations. However, the Nazi-turned-savior also played less altruistic roles during Hitler’s rule.

Ignored by the book and film bearing his name, Schindler helped Germany lay groundwork for its invasion of Poland 80 years ago. Leading up to the blitzkrieg attack launched on September 1, 1939, Schindler led a network of 25 spies and prepared an infamous false-flag attack called the “Gleiwitz Incident.”

By all accounts, Schindler during the mid-30s was “unemployed and frustrated,” not to mention an alcoholic who owed many debts. He racked up criminal charges and prison stints, including for brawling, dangerous threats, and swindling. Schindler’s failed gigs ranged from poultry farming to banking, and he was known as “Schindler Swindler.”
During a series of high-society parties, Schindler impressed the right Nazi spy masters. One of them recruited him into Germany’s Abwehr (military intelligence), and Schindler was sent to Ostrava in today’s Czech Republic. Located near the border with Poland, the city was a hotbed of agents and double-agents.

Contrary to the suave manipulator portrayed in the film “Schindler’s List,” the 30 year old’s first stint as a spy was comical. People in Ostrava knew Schindler by name and he did not bother to change his address, all while gathering information on Czech military defenses. This carelessness led to Schindler’s arrest with the charge of capital offenses against the Czech state. 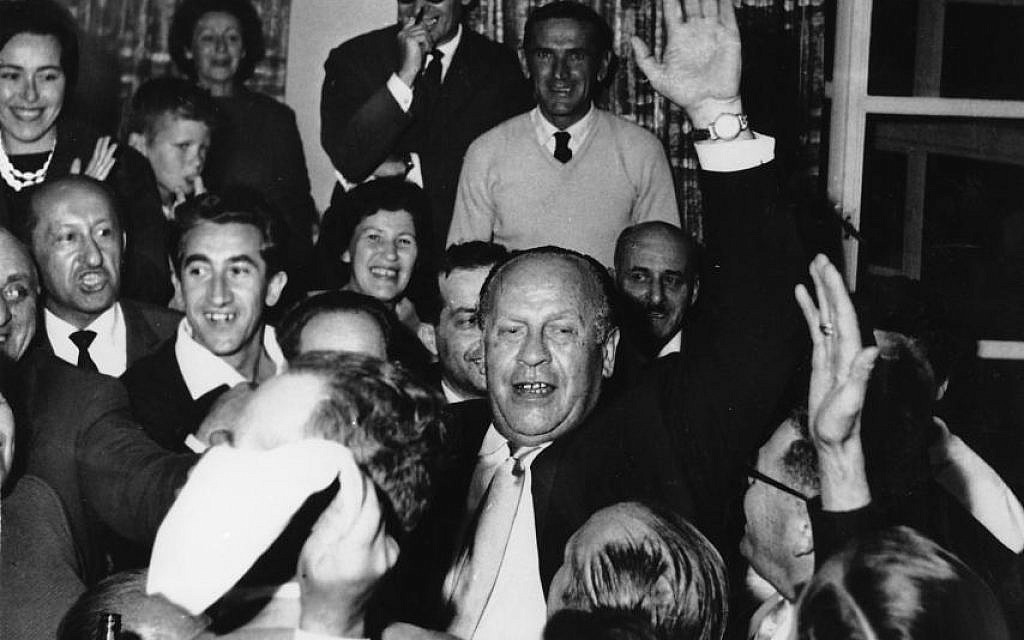 In August of 1938, Schindler pleaded guilty and was sentenced to death during court proceedings in Brno. However, Germany moved into the Sudetenland two months later, and all political prisoners — including Schindler — were pardoned and freed.

Details about this period in Schindler’s life did not emerge until after the book and film made him a legend. Fifteen years ago, David M. Crowe provided much of the backstory in his book, “Oskar Schindler: The Untold Account of his Life, Wartime Activities, and the True Story Behind the List.”

Among the activities described by Crowe in the book, Schindler once brought home cages of pigeons to the apartment he shared with his wife Emilie. The birds were intended to carry messages, but Schindler lost interest in them. He seemed to have internalized lessons from his botched first spy gig, however, and adopted code names including Otto and Schofer. 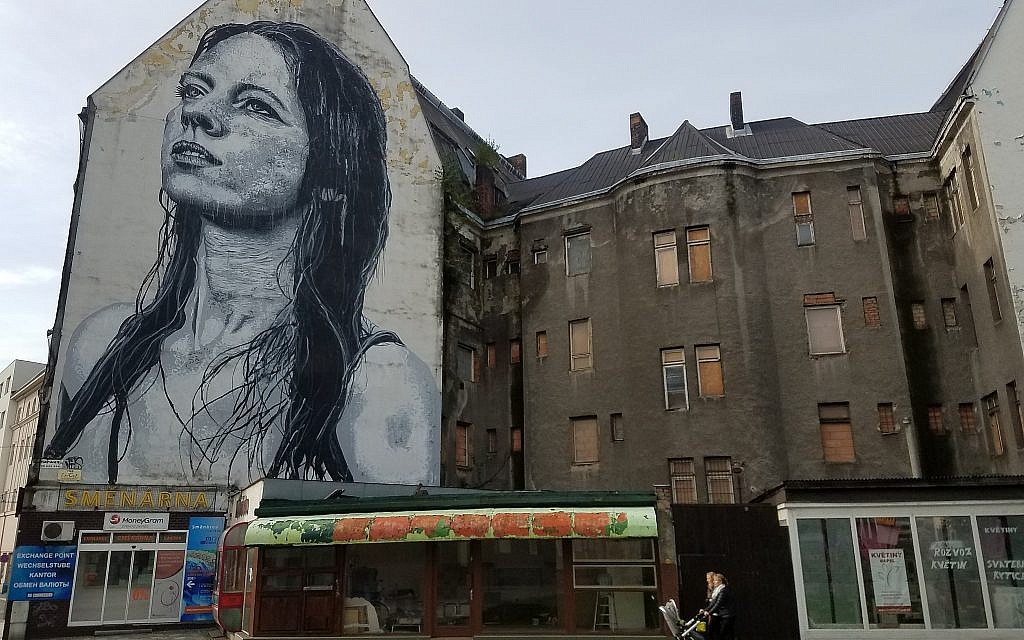 Important for Schindler’s career and future ability to rescue Jews, he received a promotion in the Abwehr: deputy commander of intelligence for the region surrounding Ostrava. Close to his territory was the German town Gleiwitz — Gliwicz in today’s Poland — with its 14th century castle.

Gleiwitz was also home to Europe’s tallest wooden structure, a radio tower completed in 1935. At 118 meters, the structure was called “The Silesian Eiffel Tower” around town, and its location near the border made it a powerful propaganda tool.

After officially joining the Nazi party in 1939, Schindler was called upon to prepare a false-flag attack related to the Gleiwitz tower. The borderlands were fueled with anti-Polish propaganda, and Schindler would help light one of many matches.

‘A gift for charming news out of people’

Early in Thomas Keneally’s 1982 book “Schindler’s Ark,” there is a bit of attention given to Schindler’s turn as a Nazi spy.

“On his Polish journey for the Abwehr, he showed a gift for charming news out of people, especially in a social setting — at the dinner table, over cocktails,” wrote Keneally. “We do not know the exact importance of what he found out [for his handlers], but he came to like the city of Krakow very well,” wrote the author. 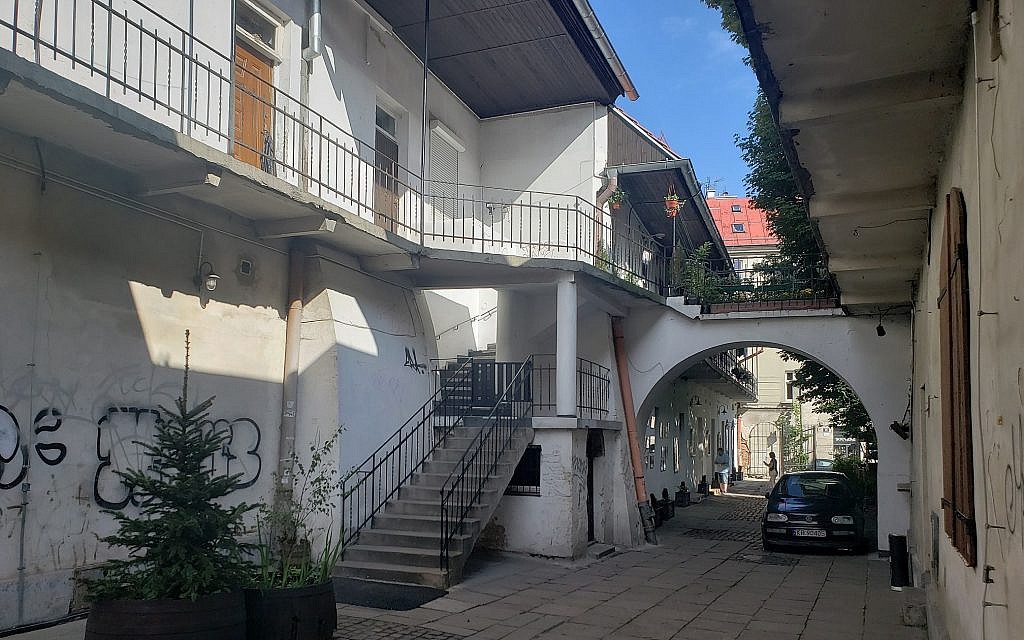 In Keneally’s book, the entirety of Schindler’s three-year spy career was reduced to a few paragraphs. According to Abwehr records, however, Schindler ran surveillance of key transportation routes and smuggled fighters and weapons across the border into Poland. At his peak, two-dozen field operatives reported to him with intelligence.

Contrary to the film portrayal of Schindler entering Krakow on the heels of the German army, he started eyeing businesses and homes there before the invasion of Poland. During the period that Schindler was getting to know Krakow, his agents were gathering supplies for the coming false-flag attack at Gleiwitz — Polish army uniforms? Check. Weapons? Check. Polish cigarettes? Check.

Necessities for the Gleiwitz operation were stored in Schindler’s apartment, according to his estranged wife Emilie’s post-war testimony. Emilie Schindler served as Schindler’s office manager and accountant during those months, and her testimony is the basis for what historians know of the couple’s work preparing for Gleiwitz. 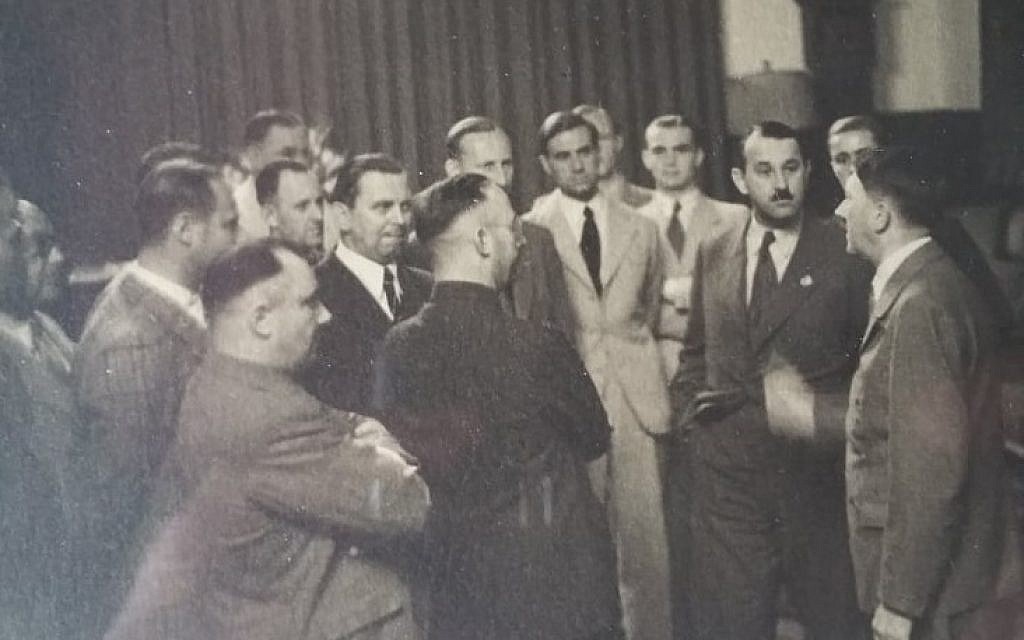 Collectively, the false-flag operations and anti-Polish propaganda were called “Operation Himmler.” One week before the planned invasion of Poland, Hitler warned his generals about the “propagandistic casus belli” being prepared, assuring them the “credibility” of any “justifications” for invading Poland would not be questioned after Germany’s ultimate victory.

In keeping with Heinrich Himmler’s penchant for exploiting concentration camp prisoners, a number of them were murdered to stage the border incidents. After being dressed in Polish uniforms, the victims — known as “canned goods” — were given lethal injections and gunfire wounds. Their corpses were displayed at several strategic installations near the border as proof of Poland’s aggression.

For the Gleiwitz operation, a German farmer known for sympathizing with Poland was murdered and his corpse left out for the press to photograph. He was meant to be the Polish “attacker” of the famous radio tower, killed by its German defenders. A fake Polish-language radio announcement about capturing the radio tower was heard with alarm by millions of Germans.

Within hours of the operation at Gleiwitz, the foreign press was invited to inspect the bloody scene at the radio tower. Media outlets everywhere led with Poland’s aggression against Germany, and the truth did not come out until 1945 at Nuremberg.

‘He was always in the con game’

In the film “Schindler’s List,” the protagonist pins a swastika onto his lapel before we even see his face. That quick gesture can be said to fill in for Schindler’s three years as an Abwehr saboteur and his role in “Operation Himmler,” for which both the Polish and Czech governments declared him a war criminal. 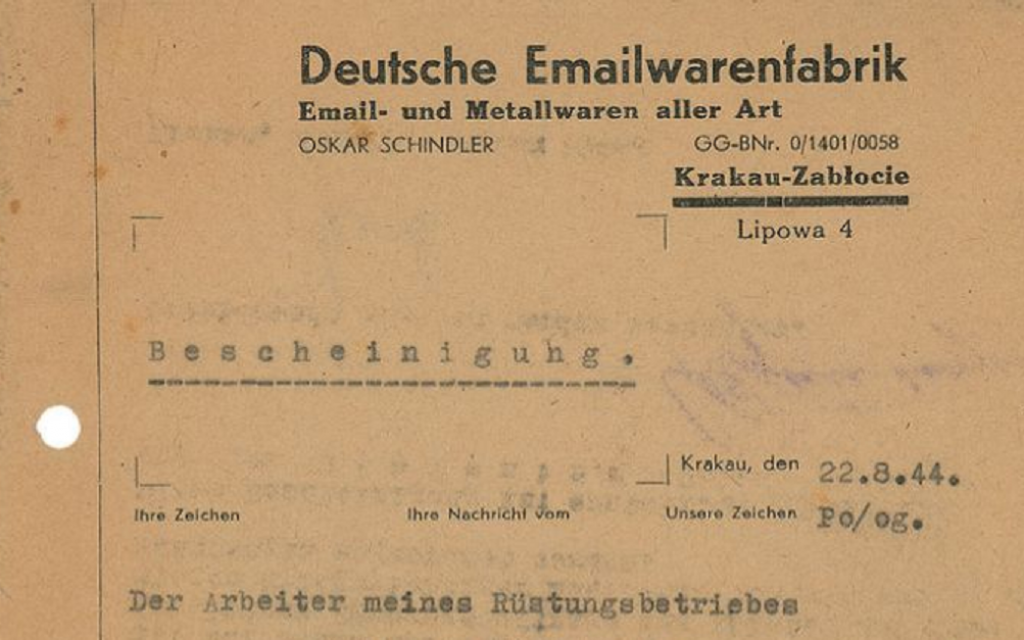 Filmmaker Steven Spielberg became aware of Schindler’s Abwehr career while making “Schindler’s List,” released in 1993. In an interview with “Inside Film” that year, the “E.T.” director called Schindler, “the man who perpetrated the con that gave Hitler the excuse to invade Poland.”

According to Spielberg, “[Schindler] was always in the con game.” His role in the Gleiwitz incident, said Spielberg, was about Schindler crafting a “little piece of prefabricated history.”

When David Crowe published his image-shattering biography of Schindler in 2004, the book was praised for “taking the shine off Spielberg’s Schindler.” The late survivor and Nobel-laureate Elie Wiesel hailed Crowe in The New York Times for “complicating” the story of Schindler and making him “more human, and also more extraordinary.”

The Keneally book and Spielberg film are not the only Schindler accounts to omit the leading man’s sabotage activities. According to Schindler’s biography on Yad Vashem’s website, “Shortly after the outbreak of war in September, thirty-one-year-old Schindler showed up in occupied Krakow.”

On Yad Vashem’s website and most other Holocaust memory websites with Schindler content, there is no mention of his role in the Abwehr. Although Schindler’s pre-invasion espionage activities gave him the know-how and SS contacts to enact a wide-scale rescue of Jews, that backstory is usually absent from accounts of his life.

Schindler continued his intelligence work until 1940, when he was sent to Turkey to investigate employees of the German Embassy. By then, he was firmly on top of operations at a formerly Jewish-owned enamelware factory in Krakow.

Soon, Schindler would apply skills honed in the Abwehr to transform the factory into an ark for 1,200 Jewish workers. 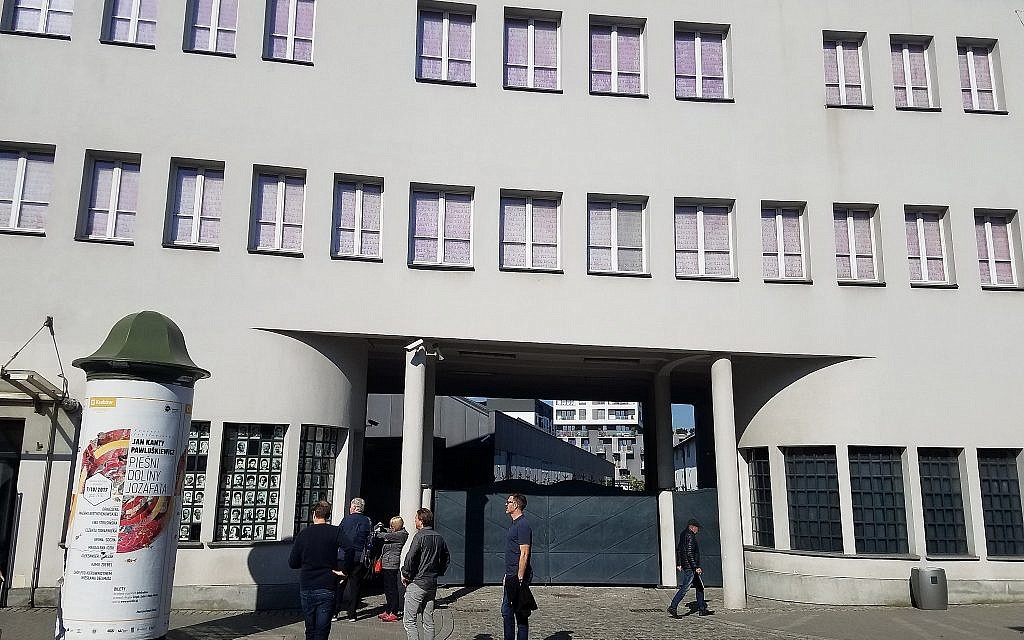 October 2017
Matt Lebovic
=================
https://www.timesofisrael.com/80-years-ago-how-a-very-different-schindlers-list-helped-ignite-wwii/
************
The subject of a 1993 Hollywood film, Oskar Schindler remains controversial for some.
In Germany, a special edition postal stamp has been issued in honor of Oskar Schindler’s 100th birthday. But in his home town of Svitavy, in what is today the Czech Republic, there is resistance to memorializing what some remember as a “Nazi” and a “spy.”There are some that say, ‘He was a Nazi, a spy, a Sudeten German and a member of the NSDAP, the party that destroyed the republic”. He was known as an opportunist, a spy and a playboy. He seemed more interested in beautiful women and fast cars , says city historian Radoslav Fikejz.
Having failed as an entrepreneur, he joined Hitler’s counter-intelligence corps to spy on Czechoslovakians. In 1939 he was arrested by the Czechoslovakian police and sentenced to death, but avoided execution because the German troops invaded the country shortly after.
That same year he purchased a bankrupt porcelain factory in Krakow, Poland, and began producing tableware for the German soldiers. As his business prospered, he took on more and more forced Jewish laborers.
Schindler maintained positive relations with the Nazis.
When the Russian army approached Krakow, he was able to convince the Nazis that it was crucial to their war effort to relocate the factory to Brnenec in what is now the Czech Republic.
———————-
————————–
Related

4 comments on “80 years ago, how a very different Schindler’s ‘list’ helped ignite WWII”