The Holocaust as Trauma Brainwashing 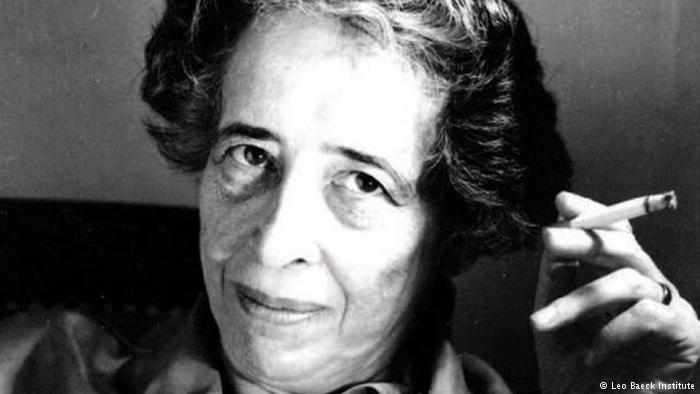 In the 1960’s the Jewish philosopher, Hannah Arendt was slandered and ostracized when she concluded that “almost without exception” the Jewish leadership were Zionists who cooperated with the Nazis. The Zionist-Nazis collusion must be kept quiet in order to give Israel the moral license to conquer Palestine and the Middle East.


“My flock has become a prey…because there was no shepherd, nor did my shepherds search for my flock, but the shepherds fed themselves…” Ezekiel 34:8

Israel’s most potent psychological weapon is the Holocaust. The Zionist battle cry is “Never again!”

In an article Monday, I suggested that the real motivation behind traumatic events like Hiroshima and Sept. 11 might be to impose a new mental paradigm upon humanity. Zionists and their globalist sponsors may have contributed to the severity of the holocaust for the same reason.

Because of the Holocaust, the world became convinced that Jews needed their own country. The Palestinians were identified (in many minds) with the Nazis, and the Israelis were given moral sanction to drive them from their homes and subjugate them. Criticism of Israel is often equated with Nazi anti-Semitism.

As a psychological weapon, the holocaust also serves an array of NWO causes.

The world is divided into heroic victims (Jews) and haters (Nazis). The “victims”, who are funded by George Soros, include oppressed women, homosexuals, and the minority flavor-of-the-day. The “haters” are the intolerant people who defend the things the globalists want to destroy: nuclear family, religion, democracy, individualism, and nationhood. The haters are “right-wingers” for whom the tolerant liberals have “zero tolerance.”

It is not my intention to mitigate Nazi responsibility for the Jewish holocaust but to scrutinize its use by Zionists and globalists as a psychological weapon. Before I continue, I had better declare myself.

I am a non-observant, non-self-hating Canadian Jew who believes in God and Christ’s gospel of love. My grandparents all died in the holocaust; my parents narrowly survived by passing as non-Jews. I lived in Israel in 1972-3 but left because Israelis seemed as materialistic as Canadians. Israel also struck me as a country that devoured its own people.

Nevertheless, I remained a Zionist until 2002 when I discovered its hidden imperialist character. Still, I support Israel’s existence within the 1967 boundaries, with restitution to the Palestinians. I believe most Israelis and Jews have been hoodwinked as I was.

The definitive history of the Holocaust is “The Destruction of the European Jews” by [now deceased] Raul Hilberg, a Jewish professor of Political Science at the University of Vermont. Hilberg’s three-volume work is largely based on meticulous Nazis documentation.

Hilberg could barely get his book published because he documented the extent to which the Nazis depended on the Jewish Councils (“Judenrat”) to administer the final solution and the lack of any real Jewish resistance. He estimated that fewer than 200 Nazis died due to Jewish resistance.

Why the negative reaction? Hilberg concluded that the mythology of the Holocaust requires that the victims appear to be heroic and to be engaged in a struggle, however unequal. In fact, the Jews went to their death like lambs to the slaughter. (Hilberg, The Politics of Memory p.135)

In the 1960’s the Jewish philosopher, Hannah Arendt was slandered and ostracized when she concluded from Hilberg that “almost without exception” the Jewish leadership cooperated with the Nazis. 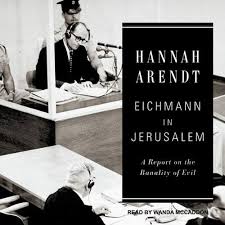 In her book, “Eichmann in Jerusalem” she wrote, “In Amsterdam as in Warsaw, in Berlin as in Budapest, Jewish officials could be trusted to compile the list of persons, and of their property, to secure money from the deportees to defray the expenses of their deportation and extermination, to keep track of vacated apartments, to supply police forces to help seize Jews and get them on trains, until, as a last gesture, they handed over the assets of the Jewish community in good order for final confiscation. They distributed the Yellow Star badges [and sometimes sold] cloth and fancy plastic armbands which were washable.” (p.117) http://www.aldeilis.net/zion/zionhol02.html

Had the Jews been totally unorganized and leaderless, Arendt writes, there would have been chaos and misery aplenty but the total number of deaths would have been far less. (p.125)

The reason Jews went quietly is not a mystery. Jewish leadership betrayed them. Hilberg attributes it partly to an age-old Jewish habit of persevering in the face of overwhelming odds. But a more important factor is that both Jewish world leadership and the Judenrats were dominated by Zionists.

Zionists had a record of cooperation with the Nazis in the 1930’s. They had a trading plan by which German Jews could redeem their property in Nazi goods exported to Palestine. 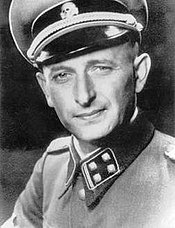 Adolph Eichmann. left, helped them set up training camps in Europe and even visited Palestine as a Zionist guest.

Zionists did not believe in the Jewish diaspora and actively sabotaged rescue attempts. If Jews could escape to other countries, what would be the purpose of Israel? Thus the Zionist Rabbi of Sweden Dr. Ehrenpreis scuttled a Swedish attempt to rescue 10,000 Jews. Zionists torpedoed a similar move by the British parliament. They also rejected numerous legitimate ransom attempts and discouraged resistance. http://www.marxists.de/middleast/brenner/ch21.htm https://www.savethemales.ca/091202.html

Generally the Zionists served the globalist elite agenda, suppressed news of the holocaust and didn’t agitate for special measures. The Allies bombed factories a few kilometers from Auschwitz but the crematoriums and railroad tracks were untouched. The Zionists believed that the greater the Jewish losses, the greater the world’s moral obligation to them.

WE WERE LIED TO

Young Jews like myself were told that Arab countries attacked peace-loving Israel after the 1948 U.N. Partition. They broadcast messages for the Palestinians to leave until the Jews were cleaned up.

In fact, Israel was given 57% of Palestine but immediately took more land and caused 700,000 Palestinians to flee in terror by slaughtering over 250 at Deir Yassin and another 250 at Lydda. The Arab radio broadcasts were a fable. Arab broadcasts encouraged the population to stay put. (Michael Prior, Zionism and the State of Israel: A Moral Inquiry, 1999, pp.16-29, 187-205) 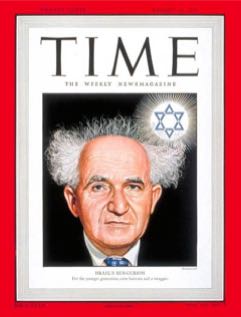 David Ben Gurion, the first Prime Minister of Israel, told TIME magazine (Aug. 16,1948) that he envisaged a Jewish state of ten million souls. Asked if that many could be accommodated within the U.N. partition boundaries, he replied: “I doubt it.”

Unknown to its citizens, Israel has always been designated to colonize the Middle East and be a linchpin in the new world order.

“Our policy must be the unity of the human race,” Ben Gurion told the TIME reporter. “We consider the United Nations to be a Jewish ideal.”

Look at how the Mossad website “Debka Weekly” characterized the Iraq war:

“Washington will have its hand on the oil lever and the ability to make Iraq’s neighbors dance to its plan for reshaping the national borders and governments of the Middle East.” (Vol. 2, Issue 94, January 23, 2003)

In conclusion, the holocaust gave the globalists the “moral authority” to invade Palestine, and enlisted unwitting Jews worldwide to their cause. In fact, they betrayed the trust of European Jewry in the most heinous fashion.

Yet Israelis and Jews, in general,  blindly follow their leaders, as European Jewry did.

2 comments on “The Holocaust as Trauma Brainwashing”