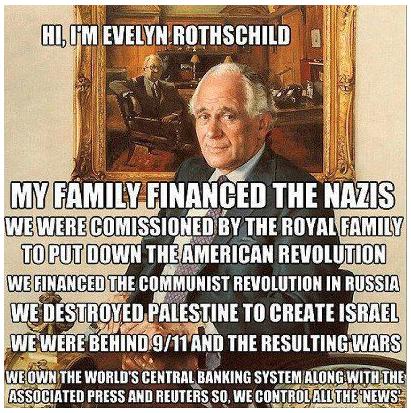 Radical Zionist sect Chabad seeks to to move to Ukraine from the USA that the sect has already milked dry. They want to build in Ukraine a “City on the Hill”, preventively destroying the local population just in case…

On May 6, 2014, the deputy head of Dnipropetrovsk, B. Filatov announced a sensation – the project “Jewish Kiev”:

We must build a new country – “City on the Hill”, New Zion. Promised Land.

Through his subordinate, Ukrainian oligarch I. Kolomoyski voiced his and Dnepropetrovsk Chabad’s ultimate goal: to build in Ukraine a new state, the promised land (sic), the new Zion. Has God promised a new promised land? It already exists – in Israel. Another Promised Land cannot be, but Dnepropetrovsk Chabad and Kolomoyski, who finances and directs (not the head of the [Ukrainian security] SBU, Nalyvaichenko) fascist punitive operation in Donetsk and Lugansk, are trying to make Ukraine over into a promised land.

Moreover, on Purim (March 16, 2014; date chosen to hit the Ukrainian Chabad as much as possible), when the autonomy referendum was held in Crimea, Rabbi of Dnepropetrovsk Shmuel Kaminetski said: “We have lived together with the Ukrainians for 1000 years. Ukraine is our Land. Today we will read the scroll of Esther, as we have done over thousands of years on Purim. Today’s reading is particularly important. Today, a new Aman, our common enemy with the Ukrainians, is very near.”

The mention of Aman dwarfs the joke of 1,000 years together. Who is this new Aman? In the broad sense, it is Russia and Russians, and more specifically – President Vladimir Putin whose plans thwart Chabad – Lubavitch‘s new Zion in Ukraine. The loss of Crimea hurt the plot by Kolomoyski and his US backers led by the largest and most influential Chabad community in New York. Even more painful is the process of separating the Donetsk and Lugansk republics, and later, of the whole South – East Ukraine. Flimsy new Jerusalem began to fall apart as soon as builders started it, because they lied and betrayed, sacrificed ordinary Ukrainians with cruelty unprecedented for the 21st century, shocking so many people. Builders of new Khazaria unleashed all their hatred of Russia and Russians, against Putin and his team, calling the new Russian president Aman, thereby emphasizing his patriotism and understanding of the enormous danger in the plans by Kolomoyski and the Chabad in Ukraine.

But even more important for grasping the root causes of Kolomoyski’s Kiev revolution is Kaminetski’s reference to a millennial common history on Ukrainian land. The rabbi does not know the history of Kievan Rus and its people. He does speak about the Khazar Empire.

Ninth century Khazars occupied a huge area from Astrakhan and the Caspian Sea to the Dnieper, including the Crimea, with the White Tower outpost in the north, from which arose the name of the Białowieża Forest [squatting Poland-Belarus border region today – PB]. To White Tower area, Khazar Jews fled in the 10th century after the defeat of Khazaria.

And now we are talking about a revival of the Khazars, with their centre shifted to Dnepropetrovsk and, apparently, Ukraine as a contributor to the “city on a hill” – the new Jerusalem. It means that Chabad – Lubavitch will move from New York to Dnepropetrovsk, thus violating the natural course of history, because it is in Jerusalem, in the State of Israel, that the Third Temple must be rebuild for the throne of the king, whose coming is so eagerly awaited by Jews world-wide.

But the Lubavitchers have their own view on the historical perspective, as Menachem Mendel Schneerson, the last Rebbe of Chabad – Lubavitch, who died in New York in 1994, is recognized as Moshiach [Messiah] who will rise from the dead. In Dnepropetrovsk a temple was built for Schneersona to sit on his throne, in the Chabad “Menorah” centre, Europe’s largest complex of this type. So, the Lubavitchers no longer expect Moshiach in Israel, but on the Ukrainian soil, recreating Khazaria, a new historical homeland, because they don’t remember Israel, and, apparently, don’t wish to have anything to do with the genuine Promised Land.

At the beginning of the 9th century Khazar coup, the second man to Hagan (prince, king) was a Jew, Obadiah, son of Dagestani warlord Bulan who converted to Judaism. Gumilev described a subsequent coup as follows:

No wonder that after the referenda on Donetsk and Lugansk independence, the results of which surprised many analysts, the secessionist federation’s (Novorossiya, New Russia) militia began a total destruction of Kolomoyski storm troopers.

Fight for freedom, supported by millions of citizens in Ukraine, will now spill over beyond Donbass borders – westwards to Kiev. Realizing this, Kolomoyski began to pump Ukrainian strategic oil reserves and sell to EU.

The first tranche of the IMF loan did not go to pay for Russian gas (an impossibility, according to Kiev junta’s Russophobic rhetoric), but was divided between the top of the Dniepropetrovsk Chabad and the Ukrainian oligarchs.

Amorphous Ukraine is collapsing, passing her fate into the hands of New Russia and its staunch supporters and defenders.

Thus, attempts to revive Khazaria in Ukraine have failed completely, It became clear that there would not be any return to the old life. Kiev junta trembles before fleeing like Yanukovych, but to the West.

Chabad Jews in Kiev create self-defense units not to protect Kolomoyski junta, but to create exit corridors and to buy time for export of their savings.

Fascist thugs continue punitive campaign against independent Donbass, shooting Kiev soldiers in the back and finishing off the wounded, but this rage is not as dangerous as a week ago.

The Rubicon has been crossed, and the militia of free republics rightly plan a march on Kiev and Dnepropetrovsk, in order to finally destroy the lair of the fascist traitors and oppressors of New Russia’s free people. Memory of the victims of Odessa will not let the militia regiments to stop at Donbass borders, but will lead them on, taking in their ranks a growing number of those who “never forget, never forgive”.

The fall of the Chabad and of Kolomoyski is near. What next?

Under what conditions will the victors over Dnepropetrovsk and Kiev fascism build a new state? This main question should be resolved today, otherwise one regime will be replaced by another.

Thus it is necessary to consider that the western regions significantly differ from the eastern ones, as far as the relation to property and collectivization of labour are concerned.

Therefore, it is necessary to develop the principle that strategic enterprises become the property of the people, i.e. the state. Land property is transferred in perpetuity to those who are not middlemen, but want to be the master in construction and agriculture.

Natural resources can not be transferred into private hands, foreign concessions or cartels citizens, but should be national asset.

Political system should be changed:

from party lists to election in the districts, cities and regions to Supreme Council, the representative body of all segments of the population of New Russia.

These and many other questions need to be addressed immediately, so that the entire Ukrainian nation understand the ultimate goals of New Russia.

A leader of the anti-Khazar popular revolution should declare these goals!

This entry was posted on May 15, 2016 by HKW in Uncategorized and tagged Chabad, Jews, Khazar population, Lubavitchers, New Zion in Ukraine, Rothschild, Ukrainian oligarchs.