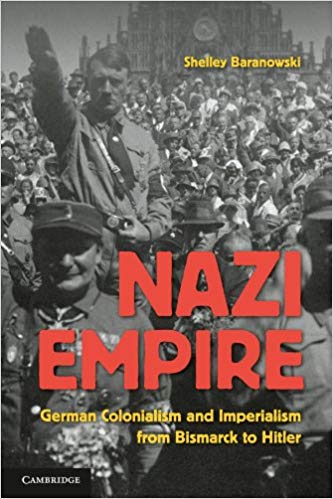 Nazi Empire: German Colonialism and Imperialism From Bismarck to Hitler, by Shelley Baranowski. 2010

The Deep, Pre-Nazi German Roots of the Polokaust. GENERALPLAN OST and the Death of Tens of Millions of Slavs

The roots of modern German genocidal imperialism followed not only the unification of Germany, but also her spectacular economic growth in the late 1800’s. In fact, by the 20th century, Germany had the most dynamic economy in Europe, and only the U. S. economy had grown more rapidly since the American Civil War. (pp. 9-10). Clearly, the Germans were “feeling their oats” and lusting for global power status.

GROWING GERMAN IMPERIALISTIC AND GENOCIDAL IMPULSES AGAINST THE POLES

Where should German growth proceed? Some policies trended towards the establishment of colonies in Africa. In 1914, Heinrich Class wrote a work, touching on MITTELEUROPA, in which he suggested that German living space (LEBENSRAUM) should be in the east, at the expense of the Poles, who should be removed, and replaced with German settlers. (p. 44).

Large-scale proto-Nazi German views of themselves, and Poles, antedated even WWI. In fact, by the start of the 20th century, the Pan Germans had already moved beyond an ethno-cultural definition of Germanness to a racial and biological one. (p. 42).

Furthermore, genocide was already latent in German thinking. The author realizes that, (quote) Together, the Pan Germans and HAKATISTEN sought to promote German settlements, ban the influx of cheap German labor outright, and expel Prussian Poles to the United States. (unquote)(pp. 42-43).

The foregoing can be generalized. The author points out that, (quote) Social Darwinian ideas were not confined to the natural or social sciences. In addition to being disseminated in the press, popular literature became yet another means of legitimating imperialism and its underlying notions of race war. Popular fiction in the Wilhelmine era described Poles as racially different from the Germans. (unquote)(p. 55).

Bismarck and von Bulow (Buelow) were bad enough to Poles. However, von Bulow’s successor, Theobald von Bethmann-Hollweg, adopted aggressive proto-Nazi views of Poles. He saw the Germans and Slavs as engaged in a “racial struggle” for survival. (p. 65).

Author Baranowski characterizes Ludendorff’s rule over Poland, during WWI, as a harsh one. (p. 87). In addition, although she does not consider Judeopolonia, she makes it obvious why Poles (notably the Endeks) saw the Jews as Pole-aloof, if not actively pro-German, and feared an eventual joint German—Jewish rule over Poland. Citing a German-language source, she writes, (quote) Ironically, that policy [promotion of German cultural values] extended to Jews, who in addition to experiencing less repression than under the tsars, also presided over the revitalization of Yiddish culture. As the German armies advanced eastward during the summer of 1915, German-Jewish soldiers proved essential as interpreters and procurers of transport and supplies, while the German administration of the Ober Ost [Supreme Command of the East] disproportionately represented Jews and Protestants. (unquote)(pp. 88-89).

THE “VERSAILLES WAS ULTRA-PUNITIVE” GERMAN EXCULPATION FOR NAZISM FAILS

The hyperinflation under Weimar and the “draconian” nature of the Versailles accords are commonly exaggerated, and made into an excuse for German support of Nazism. While recognizing the post-WWI difficulties facing the Germans, Baranowski implicitly rejects such exculpatory reasoning, as she comments, (quote) In actuality, the Weimar economy was no worse off than those of other European nations in the postwar period. Alternatively, it was somewhat stronger despite its territorial losses, because little fighting had taken place on German soil. Weimar governments avoided paying most of the reparations it ostensibly owed. (unquote)(p. 123). Far from unilaterally punishing Germany, the American policies included loans and investments for Germany, enabling modest and episodic recoveries in 1924, 1925, and 1927. (pp. 143-144).

The eventual 1939 German-Soviet aggression against Poland, which began WWII, long preceded the Nazis. Although Baranowski does not mention Hans von Seeckt’s post-WWI statement about the new Polish state as intolerable to both Germany and Russia, she does mention 1920’s German military planning, including the German-Soviet Rapallo Pact. (p. 216). The Reichswehr already then favored war with Poland over lost German colonial territories, and—interestingly—reckoned the recovery of these territories a greater priority than the return of the Saar, the annexation of Austria, and the remilitarization of the Rhineland. (p. 150).

Baranowski provides interesting insights into the Nazi movement. Although Junkers commonly supported the Nazis because of such motives as hatred of bourgeoisie parties and parliamentary democracy (p. 268), it is incorrect to see Nazism as a movement sponsored by the privileged. In fact, Nazism had an unusually broad-based following among most of German society—irrespective of religion, geographical region, social class, etc. (p. 165). The author also points out that the support of big business for Nazism came AFTER their ascent to power, as she quips, “In fact, relatively few employers joined the Nazi Party or openly sided with it before 1933.” (p. 167).

NAZISM WAS LEFT-WING, NOT RIGHT-WING

Ironic to the misrepresentation of Nazism as a conservative movement, the murdered victims of the Rohm (Roehm) Purge were disproportionately politically conservative opponents of Nazism. (p. 198).

Attention is now focused on WWII. The author elaborates of Nazi mass murder of Slavs in Poland, the USSR, etc. She also realizes the genocidal character of GENERALPLAN OST as she comments, (quote) In some versions, 51 million people were to have been driven out. Following population transfers and the deliberate confiscation of food that would likely entail the physical annihilation of most of the population of eastern Europe, roughly five million ethnic German settlers would begin to replace the victims over a generation, pushing Germany’s ethnic boundary one thousand kilometers to the east. (unquote)(pp. 299-270).

THE HOLOCAUST AND POLOKAUST WERE INTERTWINED

Now consider the Jews. Ironic to current attempts to blame Christianity for the Holocaust, the author realizes that the same pre-Hitler eventually-genocidal German attitudes towards Slavs also found Jews as targets. She writes, (quote) To the Pan Germans, continental expansion was the antidote to the insidious workings of ‘international Jewry’ that prevented Germany from assuming its rightful place among the world powers. The Pan German demand for living space at the expense of the Slavs to the east so that the German population would have room to grow and prosper would be the key to combating the Jews as well as the Poles. The ethnic cleaning of Slavs would give Germany the resources to counterbalance British power and its accompaniment, the ‘global Jewish spirit,’ as the prelude to further overseas colonization. (unquote)(pp. 45-46).