The Real Contagion is Fear 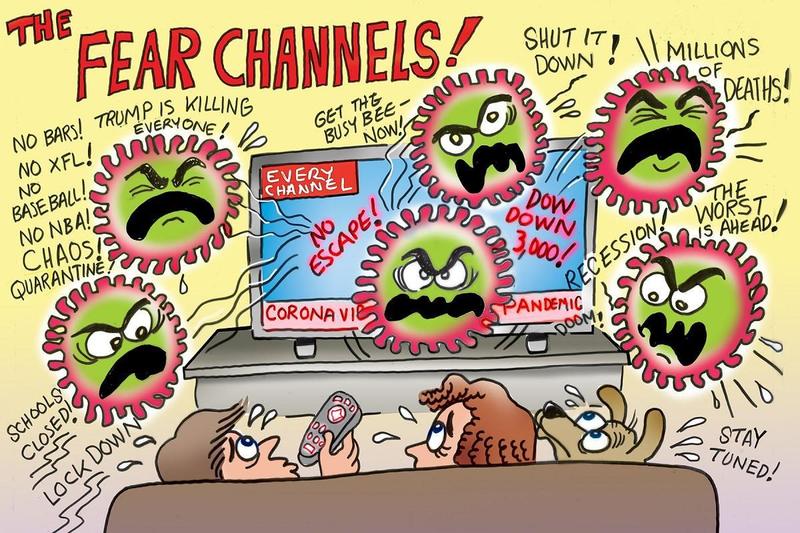 ************
Why is the Illuminati media stoking fears of a global pandemic and financial meltdown? The purpose may be to reduce us to our most primitive survival instincts. From the threat of nuclear war in the 1960’s to routine pandemic scares today,  fear is a weapon of social & spiritual control.
To counteract this campaign, put the panic on IGNORE and focus on the positive.
Have fun! Enjoy life!
Coronavirus: the Contagion of Propaganda
by Jon Rappoport
(Abridged by henrymakow.com)
“The virus is coming, the virus is coming.”
As my readers know, I’ve been presenting evidence that this so-called viral epidemic is unproven. I’ve detailed the fraud from a number of angles (archive here).
Here I want to comment on the true contagion of propaganda.
The press is piling on, as it always does. A story, true or false–it doesn’t matter–describes how basic items are disappearing from store shelves in a town like there’s no tomorrow.

*************
The STORY causes fear. So more products disappear from store shelves in more places. Now a NEW story with photos of empty shelves takes center stage. More fear. More panic buying. And so forth and so on. The build-out of propaganda.
The psychological equation is: if there is fear, then the virus must be dangerous. But this is actually like saying: if a man walking on a street at night believes a mugger is about to parachute out of the sky, the sky-mugger must be real.
The story the press should be featuring is: “our coverage of so-called panic is creating panic.” RUN THAT PIECE.
“Today in Manhattan, six greed-head editors of major newspapers and television news outlets met to discuss how their coverage is causing more and more fear. They agreed they were collaborating to incur a desired reaction…”
“Hey, guess what?” five hundred thousand readers and viewers of mainstream news say immediately. “THEY’RE making us afraid.” If only that could happen, we’d be living in a different world.
The press is also cross-cutting stories. This technique works well. In the middle of a piece about empty store shelves, we’re suddenly treated to a statement from some public health official, who says, “Epidemic cases are coming to America. We can’t stop them.”
Now you have two themes; each one gives added strength to the other. But wait. There’s more. In the SAME STORY, we read or hear about a man in Montana or Arizona who has been identified as a carrier of the virus. He’s being sequestered in a hospital. It’s a triple play. Three streams of nonsense pouring into one another.
We’re not nearly finished yet, because…social media. Someone takes the above story and flashes it on Twitter. Comments stretch out. A Twitter reader with a YouTube account sits down and turns out a quick video and posts it. His twist is: this is the big one; doomsday; it’s a planned attack using the coronavirus.
Comments below the video feature a brawl about whether the virus was made in a lab, leaked out of the lab, or was designed as a weapon. And if a weapon, who did it? The Americans? The Chinese?
YouTube demonetizes the video. This gives rise to several articles in the “alternative press.”
Now, a scuzzy outlet uses the demonetized video to make a point: people shouldn’t fly off the handle with conspiracy theories; instead they should listen to the medical authorities talking sense about the virus.
Of course, the medical authorities are blowing out tons of their own version of fear porn. They’re the propaganda experts. They use “science” to make their claims.
There are what, 20 or 30 supposed cases of the supposed coronavirus in America, out of a population of 300 hundred million? As I’ve detailed, the diagnostic tests, on which “new cases” are based, are worthless. But no matter. Join the Club of Fear. Your friends are in the Club. You don’t want to feel left out, do you? … 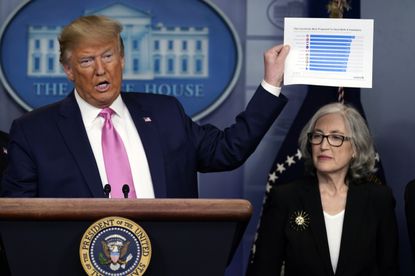 And more politics: Part of the press fear porn is critically directed at Trump, who addressed the country with the message that the government “is doing great” at handling the virus situation.
The ladder, descending from the top, looks something like this:
* Pharma plus elite Globalists are on the lookout for: a new excuse to exert more control over populations, and new billions in drug and vaccine sales.
* In Wuhan, China, where the poisonous air pollution is creating serious illness, researchers decide a new outbreak has occurred–and it must be a virus. These professionals–local Chinese, World Health Organization and CDC–claim to find the new coronavirus in five minutes. (They never adequately confirm this.)
* The World Health Organization and CDC feed the press ominous tales about the new virus, the “outbreak,” and five minutes later, “the epidemic.”
* The Chinese government locks down several giant cities.
* The epidemic story explodes in the press. * The “virus is spreading.” “Containment will be difficult.”
* “Containment isn’t working.”
* “New cases in other countries.”
* “It’s coming to your country.”
* Fear porn follows.
* Panic buying in stores.
* People think, “If shoppers are buying up food and water like the world is ending, I better buy food and water, too, before they’re all gone.”
Lovely, isn’t it?
An artificial crisis. The propaganda germ.
My shelves and closets and rooms at home are filled with essentials. They’re piled so high and packed so tight, I can barely move. I’m building a machine-gun nest on my front lawn, and a moat stocked with alligators.
My neighbor is watching. He sees what I’m doing, so he’s installing rocket launchers in his yard…
—–
First Comment from Ken Adachi-
The American People need regular exposure to this sort of cogent and concise response to the unrelenting tsunami of lies and propaganda that we are once again being subjected to from Zio Media, the government, the liars at the CDC, the World Health Organization, every TV and radio talking head, and pro-vaccine, Big Pharma frontmen like Anthony Fauci — resounding from every social media outlet, blog, vlog, podcaster, opinion writer, commentator and reader comment section of every website devoted to truth and honest reportage.
Lies & Liars cannot sustain themselves when the Flame of Truth burns bright within the hearts of citizens who are determined to preserve this Land and its future generations from psychopaths and demon-possessed schemers. Speak the Truth – loud and clear – from every avenue available to you and this putrid calumny will evaporate as quickly as it arose.
===============
Original article here:    https://www.henrymakow.com/2020/03/the-real-contagion-fear-greed.html