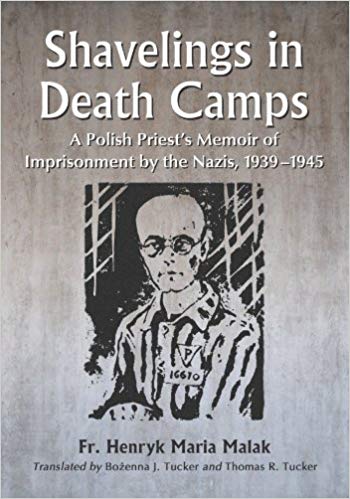 This book presents much seldom-known or appreciated information. I focus on some issues of lasting relevance.

The reader, not surprisingly accustomed to think only of Jews as victims of the Nazis, is in for a shock by reading this moving work. The author describes his experiences in the 1939 war, the early German terror, his incarceration in Nazi concentration camps such as Stutthof, Sachsenhausen, and Dachau, and his near-miraculous survival of these frightful experiences.

WARNING: The German cruelties described in this book are revolting, even in comparison with other books on this subject, and may be upsetting to sensitive individuals. As for the title, the term shaveling refers to the shaving of part of the crown of the incarcerated priest’s head.

WHAT GETS AROUND COMES AROUND: 1939 GERMAN TERROR BOMBING AND STRAFING SET A PRECEDENT FOR THE ALLIED BOMBING OF GERMANY

Before WWII, author Father Malak was stationed in Inowroclaw, in the area that would later be directly annexed to the Third Reich, complete with an eventual systematic closing of churches and exile of Polish priests. (p. 222). In common with many other eyewitnesses, Fr. Malak recounted the 1939 Luftwaffe bombing of churches with parishioners inside (p. 13) and the wanton Luftwaffe strafing of columns of fleeing, defenseless civilians. (pp. 14). The author testified of these aerial German military atrocities, notably those that occurred on the road between Bydgoszcz and Inowroclaw.

DO NOT BLAME CHRISTIANITY FOR THE HOLOCAUST

The standard narrative today often tries subtle ways of connecting Christianity to Nazism and the Holocaust. In contrast, the author had an astute grasp of the political situation. He noted that Nazism, Fascism, and Communism all had elevated the state to a deity, and they all had trampled the individual human being, who was created in God’s image and likeness. (p. 93).

The anti-Semitic aspects of Nazism have overshadowed the anti-Christian aspects of Nazism. The author emphasized the verbalized hatred of the Nazis for Catholic priests, not only as Poles, but also specifically as bearers of Christianity. (e. g, p. 94). The Nazis confiscated the local monastery library and burned all the books in incinerators–not only Polish-language books but also German-language ones–because their motivations had been anti-Christian as well as Polonophobic. (p. 30). Nazi show trials against priests slandered them as sexual deviants (p. 396)–something very much part of the cultural Marxist and LEWAK media anti-Christian propaganda today.

In the concentration camps, the Germans purposely chose German kapos (capos) from a criminal or Communist background to rule over and torment the priests. The criminals had an instinctive hatred for priests because the latter represented God’s law that the criminals had long flouted. The hatred of Communists towards religion and the religious needs no comment.

Soon after conquering Poland, the Germans tried to make Volksdeutsche out of some of the Polish priests. The Germans variously appealed to such things as their German-sounding names, their partial German ancestry, their familiarity with German culture, their previous (involuntary) service in Kaiser’s army, etc. The German authorities utterly failed. (pp. 68-70).

In late 1941, the Nazi German officials at Dachau tried to induce the Polish Catholic priests to declare themselves German in exchange for bribes (e. g, better provisions). The Poles refused. (p. 396).

CONTRARY TO POPULAR MISCONCEPTION, THE NAZIS DID NOT CONSISTENTLY TREAT JEWS WORSE THAN NON-JEWS

Fr. Malak’s experiences do not support the nowadays-customary Holocaust-related dichotomy of the sufferings of Jews and Poles. He found that, in the concentration camps, Jews were sometimes treated worse than Poles, while, at other times, Poles were treated as bad as the Jews. (e. g, pp. 114-115, 125, 190, 192). Jewish prisoners, better fed then Poles, staffed the Dachau crematorium.

The Germans performed horrific experiments on the Polish priests at Dachau. (pp. 271-on). They experimented with malarial infections, injections of phlegmon, survivorship in ice-cold water, etc.

Fr. Malak kept a diary of what turned out to be the last several months of the European part of WWII. After the fall of the Soviet-betrayed Warsaw Uprising in 1944, some Poles from Warsaw were imprisoned at Dachau. (p. 347). The Germans had broken the terms of the Polish surrender.

BETTER SURVIVORSHIP THAN IN EXTERMINATION CAMPS—BUT NOT BY MUCH

The survival rate of Polish priests, at Dachau, was very low. Out of a transport of 500 that arrived at the relatively late date of October 30, 1941, only 70 were still alive on the day of liberation. (p. 397). This is an 86% morality rate which, though not quite the reputed 100% mortality rate of Jews sent to the extermination camps, was close enough. [Remember, in many of the so-termed extermination camps, some Jews were diverted to forced labor. And quite a few Jews were diverted to forced labor without being sent to the death camps at all.]

In January 1942, an additional 300 Polish priests were dispatched to the gas chambers of Dachau. (p. 263). This reminds us, once again, that mass gassings were not reserved exclusively for Jews as part of the Shoah. It also reminds us that gas chambers were not only found in the so-termed extermination camps. These facts further underscore the arbitrariness of any dualism between death camps and “ordinary” concentration camps.

A MEASURE OF FRONTIER JUSTICE

As the Third Reich was collapsing, Heinrich Himmler gave an order that all the prisoners of Dachau be slain. (pp. 365-366). However, American troops arrived first, and liberated the camp. There were many revenge killings of kapos and SS men. The priests condemned this vendetta.

Holocaust Survivors Mark 75th Anniversary Of The Liberation Of Auschwitz

This year was the 75th anniversary of the liberation of Auschwitz. The largest mass extermination camp in human history, between 1940 and 1945 over 1.1 million people met their deaths there. Even three-quarters of a century later however, the lessons of history have yet to be learned. Key facts about what really happened at Auschwitz, and why, have been concealed from the people of the world by multinational corporate interests and their political stakeholders.

Currently, our history books essentially tell us that WWII was caused by a psychopathic dictator, Adolf Hitler, and his entourage of racist henchmen, the Nazis. The fact is, however, that WWII was a conquest war conducted on behalf of the largest chemical and pharmaceutical cartel at that time – I.G. Farben, made up of Bayer, Hoescht, BASF and other companies – with the goal of gaining control of the global markets in patented chemicals, drugs and oil. In pursuit of this aim, the I.G. Farben companies had financed the rise to power of the Nazi party and the transformation of German democracy into a dictatorship.

I.G. Farben’s creation of a stupendous war machine for the Nazis was carried out with the utmost deliberation and ruthlessness. Near Auschwitz, in order to supply the chemicals, fuels and other materials needed for the German war effort, it constructed the largest industrial complex in Europe at that time. Known as I.G. Auschwitz, and a 100% owned subsidiary of I.G. Farben, the workforce for the factories at this facility included prisoners from the Auschwitz concentration camp, who were used as a source of slave labor. Those who were too weak or too sick to work at the factories were sent directly to the gas chambers. Even the chemical gas Zyklon-B, used by the Nazis for the annihilation of millions of people, was derived from the drawing boards and factories of IG Farben.

Simultaneous with this, the pharmaceutical divisions of Bayer and Hoechst were using thousands of prisoners from the concentration camp as guinea pigs for the conducting of deadly medical experiments. Chemicals used in these tests went on to become the first generation of chemotherapy drugs, eventually making tens of billions of dollars a year for their manufacturers.

To learn more about the hidden history of Auschwitz, see this article on our website.

Fritz Karl Ertl was an Austrian architect and Bauhaus student of Wassili Kandinsky, who worked at the Auschwitz concentration camp as deputy head of the SS central construction management. On August 22, 1939, a few days before the official start of World War II, Hitler authorized his commanders, with these infamous words, to kill “without pity or mercy, all men, women, and children of Polish descent or language. Only in this way can we obtain the living space [lebensraum] we need”.

On 15 March 1940, during a meeting of camp commandants in occupied by Germans Poland Heinrich Himmler said: “All specialists of Polish descent are to be used in our war industry. Later Poles will disappear from the World. (…) It is essential that the great German people should consider it as its major task to destroy all Poles.”

Auschwitz was first constructed by Germany to imprison the ethnic Poles, shortly after Germany with cooperation of Soviet Union and Slovakia invaded and occupied Poland in September 1939.

On 14 June 1940, Germans deported a group of 728 Poles from the prison in Tarnów to the Auschwitz concentration camp. Among them were soldiers of the September campaign, members of the underground independence organizations, secondary school pupils and students, as well as a small group of Polish Jews.
https://en.wikipedia.org/wiki/First_mass_transport_to_Auschwitz_concentration_camp
Transports of Jews started from 1942.
And immediately after the war, in the place of the German KL Auschwitz-Birkanau, NKVD established two of its own camps in which extermination of ethnic Poles continued .

The Soviet Union, whose army had liberated the Auschwitz camps on January 27, 1945, oppressed Poland under communist rule for nearly 45 years.

Since the end of the 18th century the vast Polish-Lithuanian Commonwealth had been partitioned by the empires of Germany, Russia and Austria. When in 1918 those partitioning empires collapsed, Poles fought tooth and nail to establish independence.