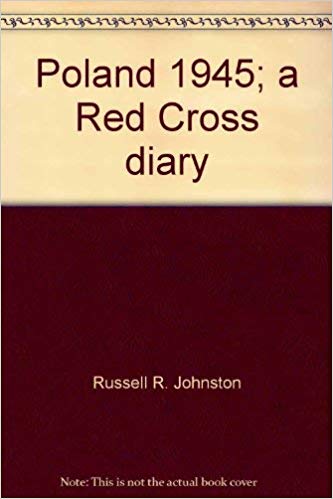 An Eyewitness Account. Forced Communization of Poland. The Crushing Oppression of Postwar Poles and Rampant Disrespect of Property: Why Occasional Polish Reluctance to Return Post-Jewish Properties

This diary covers the Middle East, Russia, and Poland. My review is limited to the latter.

The author’s stay in Poland lasted from end-August 1945 through April 1946. When he first arrived at the ruins of Warsaw, he was less than a year removed from the Germans’ systematic destruction of Warsaw that had followed the Soviet-betrayed Warsaw Uprising, and only several months removed from the Red Army’s “liberation” of Warsaw’s ruins. He stayed at the Polonia Hotel (p. 110), one of the few locally remaining usable structures. When the wind blew, he could sense the dust of bricks and smell the sweet-sickly odor of tens of thousands of decomposing corpses. (p. 112). Constantly collapsing walls were killing hundreds of additional Poles.

Pointedly, the privations of the people shocked the author: According to investigations by the American Red Cross, overall, over two and a half million Polish children were dangerously undernourished, five million children had inadequate food, and the infant mortality rate was a staggering 25%. (p. 168).

The Holocaust establishment has demonized Poles as greedy and (what else?) anti-Semitic for occasionally wanting to hang on to post-Jewish properties when the original Jewish owner turned up alive. The American reader is misled into thinking that Poles were acting under normal circumstances. They most certainly were not. Although author Johnston does not mention Jews, he does shed light on the oppressive conditions facing Poles, which provides the usually-missing context.

Property rights effectively did not exist even though the wartime destruction and c0nfiscations had ended. Johnston commented, “The worst in Europe, in fact. The people on the farms especially had little or nothing to carry them through the winter. First the Nazis and then the Russians had taken about anything and everything that could be moved. Besides that, most of the fields were still planted with land mines.” (p. 111).

The systematic sacking of Poland by the Soviet “allies” was blatantly obvious. Every day, Johnston saw truck caravans going eastward, carrying looted Polish goods that included everything from bicycles to heavy machinery to farm animals. (p. 118). When in former East Prussia, he saw that: “…the Red Army soldiers stationed here have helped themselves to everything that could move.” (p. 136).

While in former East Prussia, he commented: “Banditry, Tang tells us, is on an increasing scale, and no man’s belongings are safe from thieves, or from Russian soldiers.” (p. 136).

It is not difficult to deduce what the Pole must have been thinking when the Holocaust-surviving Jew turned up: First the Russians, and now the Jew, can take what little I have!

Shortly after his arrival in Warsaw, Johnston assessed the situation. He remarked: “The Poles were a volatile, friendly people who deserved far better from their allies than to be turned back to the Russians now, without a right to choose.” (p. 110). “I’ve been in Warsaw just two weeks, but already I’m convinced it is a captive city–that the Russians have taken over and are here to stay. The evidence is grim and everywhere to see.” (p. 118). In many large towns and cities, the Soviets were building long-lasting concrete obelisks with Hammers and Sickles, and to the likes of Stalin. (p. 122, pp. 134-135).

THE ONGOING FORCED COMMUNIZATION OF POLAND AND THE RAMPANT COMMUNIST TERROR

No sooner had the Russians entered Poland than: “A reign of terror followed, and opposing patriotic groups and political parties were manhandled, murdered, and deported.” (p. 159). New restaurants in Warsaw, open early 1946, were the scene of arrests the NKVD of Poles attempting to communicate with foreign visitors. (p. 153). Johnston adds: “And, most significant and tragic, I’ve seen the hurried groups of white-faced citizens of the so-called upper class being hustled through the early morning streets the Russian NKVD.” (p. 118). The author describes how the NKVD arrested a young man engaged to marry one of the foreigners, and sent to a labor camp, for being born in the “wrong” class and for have once been a member of the Polish Underground. (pp. 151-152). On top of all this, General Anders was now branded a traitor, and the families of his soldiers were forced to attempt to flee Poland. (pp. 153-154).

AUTHOR DOES NOT FORGET THE PRIVATIONS OF THE KRESY EXPELLEES

German revanchists commonly complain about the conditions facing the German expellees from the Recovered Territories (the VERTRIEBENE). It turns out that the Polish expellees from the Kresy did not have it easy either. While learning of the expellee Poles set to arrive in former East Prussia, he writes: “Those riding in boxcars will have to pay a fee of two hundred zlotys, while those who can’t pay this fee must ride on open flatcars exposed to the wind and snow. The only belongings they’ll be allowed to bring with them will be what they can carry…The poor devils on the flatcars will be living like that for days, maybe weeks–who can say?…They’ll literally freeze to death…others will contract pneumonia and die later on. Polish winters can be hell…” (pp. 136-137).