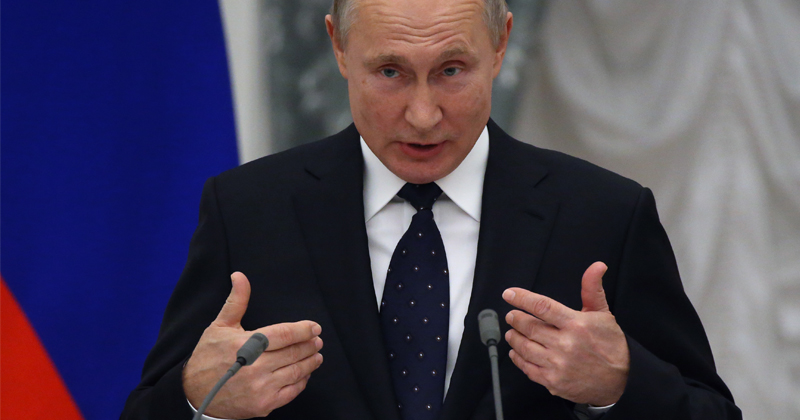 A rebuttal of Putin’s lies and defence of Poland.

A diplomatic row has emerged between Russia and Poland, after scandalous comments by Russian President Vladimir Putin emerged, in which he claimed that the invasion of Poland on the 17th of September 1939 was “necessary because the Polish government lost control of the country” and bizarrely claimed that the Soviet invasion “saved many lives”.

He further went on to accuse Poles of “negotiating with Hitler” and complained that the Poles have been dismantling Red Army memorials.

These comments are part of an increasingly worrying trend in Russian politics, which seeks to minimize and whitewash the crimes of the USSR, in particular their post war occupation of Central and Eastern Europe and their implementation of puppet governments which kept the region under the yolk of communism for almost half a century.

Stefan Tompson, a British-Polish filmmaker has recorded a short response video, debunking the Russian claims and setting the record straight. In his reaction video, he highlights the role of the Ribbentrop-Molotov pact, and the secret protocol within it which led to the mutual invasion of Poland by Nazi Germany and Soviet Russia, and their attempts at destroying and eradicating the Polish elites, culture and nation.

He points out the numerous crimes of the Soviet Union on the Polish people: over a million Poles were deported to gulags, half a million Poles were imprisoned in Soviet jails and tens of thousands were shot, including 22 thousand top Polish officers who were systematically shot in the Katyn Massacre, a crime the Russians denied responsibility for till recently.

He critiques communism, reminding his viewers that “communism is a totalitarian ideology that sacrifices every aspect of life at the altar of its oppressive ideology.”

He ends the video by extending a hand to the Russian people,a people who have been the greatest victims of communism, with 20-30 million Russians killed by totalitarian communists. Tompson points to hope, by quoting the Russian dissident, philosopher and Nobel Prize winning writer, Alexander Solhzenitsyn, who survived a soviet gulag and penned “Archipelago Gulag”: the Russian thinker understood the importance of truth and its role in vanquishing totalitarianism, and he phrased it simply: “One word of truth shall outweigh the whole world.

The so-called ‘noble’ meeting in Israel of the Big Five; Russia, Germany, Great Britain, France and USA in the smokey shadow of the Holocaust crime did not even give Poland the right to make a speech there, discriminating against country, which was the first victim of World War II !!!

The entry of the Red Army into Poland was not in a form of “liberation”. It was an INVASION – the exchange of one occupation for another. From Nazi Brown occupation for the Bolshevik Red occupation.

Murders, rapes and robberies were an inseparable element of the Soviet “liberation march” through Poland, Germany and other countries of Central and Eastern Europe. The Bolsheviks raped everything that moved. They did not let get away even an 80-year-old women nor little girls only several years. Victims of Soviet sexual violence – if survived- found themselves in a dramatic situation after the war. A good deal of them struggled with nasty venereal diseases, and many could not cope with the trauma. However, Bolshevik bestiality was a taboo subject, so the raped women remained alone with their suffering. Many of them were unable to live a normal life again and have committed suicide.

Imagine now those who were strong enough to survive and their detestation and repulsion, when they had to pass by the monuments of Soviet liberators erected after the war ….

Red Locust. The plunder of “liberated” Poland and other countries by the Red Army

The Red Army stripped the territory it crossed by the law of the victor. Loot value is estimated at hundreds of millions of dollars. Everything of value was robbed: hand watches, works of art and even entire factories. The procedure took place at the order of Stalin himself.

As a result of the decisions of the Big Three in Tehran, Yalta and Potsdam, Poland lost its Eastern Borderlands with Lwów (Lviv, now in Ukraine)and Wilno (Vilnius, now in Lithuania) – a total of 178 thousand square kilometers. As compensation, Poland was granted 101 thousand square kilometers called “Regained Territories” – areas of former East Prussia and West Pomerania.

During the war looting of these areas took place on an unprecedented scale. But looting was not limited to the “Regained Territories”. Pursuant to the USSR war legislation, plundering “for war purposes” was allowed in all captured territory. Stalin gave the appropriate orders in January 1945, when the Red Army crossed the Vistula. On this basis, special “trofiejnyje otriady” (trophy brigades) were formed.

Looting was extremely methodical. Trophy brigades consisted of, among others, art historians who assessed which works were worth taking and engineers who supervised the dismantling of factory machinery.

Soviet trophy brigades had their own warehouses and a fleet of trucks. Entire factories were dismantled and transported by rail. A total of 100,000 personnel served in trophy brigades which also included forced labor of prisoners and the surrounding population. The entire operation was directed from Moscow by the Special Committee of the State Defense Committee (GKO), headed by Georgy Malenkov – one of Stalin’s closest associates.

Nearly a quarter of Poland’s rail network suddenly disappeared. The Soviets took away thousands of kilometers of rail tracks from Polish “Regained Territories” and eastern Germany.

However, before the “trofiejnyje otriady” took the tracks with them, they used the railway network to transport entire factories to the Soviet Union. Particularly plundered were the areas of Upper Silesia, where both on the Polish and German sides of the pre-war border operated huge mines, smelters and factories.

The dismantling and removal of thousands of tons of equipment and materials also took place in other countries captured by the Red Army on its way to Berlin. In June 1944, the looting of Romania began. 2800 railcars of loot were sent from Hungary, 6500 from Czechoslovakia, and 31200 from Austria. By August 1945, 215000 railcars had been sent from Poland.

A report by the Swiss legation in Budapest describes the Red Army’s entry into the city:
“During the siege of Budapest and also during the following weeks, Russian troops looted the city freely. They entered practically every habitation, the very poorest as well as the richest. They took away everything they wanted, especially food, clothing and valuables… every apartment, shop, bank, etc. was looted several times. Furniture and larger objects of art, etc. that could not be taken away were frequently simply destroyed. In many cases, after looting, the homes were also put on fire, causing a vast total loss… Bank safes were emptied without exception — even the British and American safes — and whatever was found was taken.”

Soviet looting did not only concern large industrial centers, it was experienced by ordinary civilians as well. “On July 26, 1945, when returning by bicycle from work, I was unexpectedly pushed off my bicycle in Baranów by two unknown Soviet soldiers and without any explanation they took my bike. My intervention with the Soviet military authorities did not have any effect as the Soviet officer told me that my report was already the 20th in line…”. Countless reports of that kind were recorded all over Poland.

Apart from possessions and factory equipment, the Red Army also confiscated over 60 percent of Poland’s grain stocks. Farmers suffered hunger and the animals had no feed. The Soviets requisitioned the strongest farm animals, leaving behind only the sick and weak.

Sources: “Great Fear. Poland 1944-47” by Dr Marcin Zaremba; Swiss Legation Report of the Russian Invasion of Hungary in the Spring of 1945

Aleksander Pogorzelski‎ to Silent Heroes of the Forgotten Holocaust