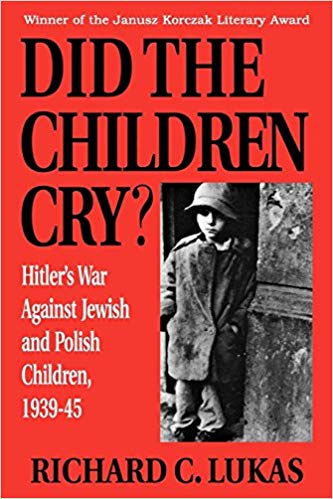 An Attempted-Censored Book–All Because It Dared to Compare the Sufferings of Polish Children With That of Jewish Children!

This book is known less for its content than for the controversy that has surrounded it. Nominated for the Janusz Korczak Literary Award, it was subsequently beset with a flurry of Jewish protests. The racism behind the objections stink to high heaven. After a spate of bad publicity, and the threat of legal action from Poles, the award was belatedly presented—but without any ceremony.

HOLOCAUST SUPREMACISM IS ALIVE AND WELL

Let us examine the contrived fuss surrounding the Janusz Korczak Literary Award. The reader can clearly see that this book does not fit with the template of modern thinking—where the genocide of Jews is given disproportionate attention, is accorded a special term (Holocaust), and any attempt to compare it with any other genocidal event is called “relativizing the Holocaust.” In contrast to all of this, Lukas consistently juxtaposes the experiences of Polish and Jewish children. Perhaps that is what motivated the outburst of hostility to this book. So long as Jewish sufferings are thought to be higher than those of others, or at least more worthy of public attention than those of others, specifically the Poles, any such juxtaposition will be unbearable, especially for a book that is to receive any special recognition.

Throughout this book, Lukas consistently relates the experiences of Polish and Jewish children to each other. Both, for instance, experienced the horror of the German conquest of Poland. Both experienced a breakdown of morality caused the privations of the German occupation. Both learned how to lie and steal to survive. Both quickly learned not to trust anybody. Both were in German concentration camps. Both were used in sadistic experiments conducted Dr. Mengele. Both experienced sexual assaults (including homosexual assaults) by German guards and officials (pp. 95-96, 202). Both were sent to secret schools in their respective communities. Both took part in clandestine cultural activities. Both enjoyed the childrens’ books written by Polish Jew Janusz Korczak. Both held odd jobs to help their parents. Both were forced to work in Germany as forced laborers under appalling conditions. Both were involved in the rescue of their compatriots. Both served in their respective guerilla movements. Both had to watch their parents die, and both experienced death at the hands of the Germans in large numbers.

Both were commonly left orphaned. Both experienced difficulties in locating still-surviving relatives (with postwar Germans commonly resisting attempts to identify kidnapped Polish children: pp. 211-214). Finally, both experienced adjustment problems after the war. For example, both Polish and Jewish children commonly internalized the German hatred directed against their respective nationalities, scorning their respective heritages, and sometimes actually believing that their nationalities had deserved their sufferings.

FRIVILOUS ACCUSATIONS AGAINST THIS BOOK

One smokescreen reason give for challenging the Janusz Korczak Literary Award is the transparently bogus charge that this book “sanitizes” Polish behavior. Even a cursory reading of it reveals just the opposite. Lukas criticizes Polish conduct many times. For example, he discusses Polish-German collaboration (e. g., pp. 141-142), even citing an Israeli study that estimates that there were 7,000 Polish collaborators in all (p. 152; which, incidentally, means that about 1 in every 4,000 Poles had been a collaborator). Another reason given for challenging the Janusz Korczak Literary Award is the claim that this book is “borderline anti-Semitic”. Indeed it is—if one understands anti-Semitism to be any criticism of Jewish conduct under any circumstances! Lukas, for example, points out that Jews were commonly prejudiced against Poles just as Poles were commonly prejudiced against Jews (p. 152). He also gives examples of Jewish selfishness against fellow needy Jews at the same time that he gives examples of Polish selfishness against fellow needy Poles (p. 28). Lukas also cites a Jewish historian who faults the method that Jewish organizations used to recover Jewish children after the war (p. 220). Is all this anti-Semitism? Let the reader decide.

And, far from overstating the extent of Polish assistance to Jews, Lukas quotes a wide range of estimates (both Polish and Jewish) of how many Poles were involved in such aid (pp. 155-157). Lukas also provides figures for the deaths in some of the extermination camps. The collective death toll at Chelmno, Belzec, Sobibor, and Treblinka ranges from 1.65 million to 2.54 million (p. 230).

THE POLOKAUST NOT FORGOTTEN–NOT THIS TIME, ANYWAY. POLES TO BE COMPLETELY DESTROYED

The genocide against Jews is well known, but Lukas makes it clear that Poles were also victims of genocide. The genocide of Poles perhaps does not spark the imagination as much as the industrial-scale gassing and cremation of Jews the millions, but it was no less real. Heinrich Himmler stated (p. 17) that all Poles will disappear from the world and that all Poles will be destroyed. Martin Bormann (p. 21) asserted that Slavs should be kept alive only as long as they are needed as forced laborers. 2-3 million Polish gentiles, including roughly half of the Polish intelligentsia, were already murdered. Of course, since the Polish population was much larger than the Jewish one, the genocide of Poles had to be a long-term German project, with greater emphasis placed on passive genocide, at least until Germany won the war. Hitler spoke of reducing the Slavs’ fertility and, 1942, the Polish birth rate had fallen 80% relative to its prewar level (p. 87). SS General Odilo Globocnik noted that the mass killings of Poles and their replacement with German colonists meant that Poles would be gradually crushed “economically and biologically”. (p. 107). Heinrich Himmler wanted the General Government (German-occupied central Poland) to be completely Germanized (that is, Poles replaced with Germans) within twenty years (p. 107).