How Zionists Hijacked US Jewry 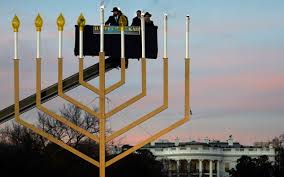 EVERYONE IS A PAWN IN THE NWO GAME. JEWS ARE NO EXCEPTION
How the central bankers made US Jewry an appendage of the gangster state of Israel by stifling American Jewish culture.

Now all Americans are go-fers for Israel.

“Today in America, Jewish culture and even Jewish religion have degenerated into ‘Jewish’ nationalism, and Jewish philanthropists, Jewish schools, Jewish segregated services, have been all subverted (with a few noble exceptions) into serving…the upbuilding of the ‘Jewish homeland’…

The worst anti-Semites are Zionists who create anti-Semitism and use it to dupe and coerce Jews into advancing the Illuminati bankers’ plan for world government dictatorship.

In the past, I have argued that Zionism is a protection racket and conspiracy against Jews. Today, I will suggest they have suppressed normal Jewish cultural/spiritual expression and hijacked the Jewish people to serve their perverted cause.

Henry Hurwitz’s  Menorah Journal and  Menorah Societies  were  an  attempt  by American Jewry to see itself culturally and spiritually as an end in itself, rather than a support system for the “Jewish homeland.”  Zionists  suppressed this  free  and democratic  group,  in the same way as they have deprived all Americans of their  political and cultural  freedom.

Henry Hurwitz started the first Menorah Society at Harvard University in 1906 and its journal The Menorah Journal in 1915. The Menorah movement stood “for the study and advancement of Jewish culture and ideals in America.”

By the end of the First World War, the movement had expanded to include the Intercollegiate Menorah Association, Summer School, Education Conference and Board of Lecturers.

Essentially the movement fostered non-dogmatic, non-political study of Jewish history, spirit and culture. It was open to different points of view and initially received support from the central bankers. But when Hurwitz insisted that Judaism had nothing to do with Zionism, and Jews ought to feel perfectly at home in America, the bankers froze the  Menorah movement’s Jewish community funding. 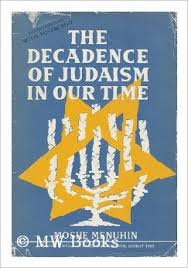 In 1958,  Hurwitz wrote a friend, “We have had more than one coy proposal from this and that wealthy organization to take us over. Our financial problems would then be solved. And our freedom–that is, our true life–dissolved.”  (Menuhin, The Decadence of Judaism in Our Time,  1965. p.366)

In the Autumn-Winter 1959 issue of the Menorah Journal, Hurwitz describes the effect of “bigotry” i.e. Zionist banker control of organized Jewry.

“This bigotry strikes beyond one old established independent organization and its magazine, which have perhaps rendered some service  to Judaism  through more than half a century.

“This bigotry poisons the air of Jewish communal life in America. It tries to suppress…the basic American principles of free speech and free press. It penalizes honest analysis [of those] who control the Jewish public tax-exempt philanthropic funds, and hence have the power to enrich favorite organizations, while starving others that do not bend the knees…Thus, they actually hinder here a rational long-view consideration of the best interests of the people of Israel themselves.

” Moreover, as is well known, a very large proportion of the supposedly voluntary philanthropic donations are extracted from business and professional men on threats of punitive economic and social sanctions. This must be described as what it is–a species of terrorism. Such terrorism has become a most effective technique in large Jewish fund raising.” (Menuhin, p. 367)

Unfortunately the Menorah movement died with its founder in 1961. Its work was partly continued by the American Council for Judaism, under its dynamic founder Rabbi Elmer Berger (1908-1996.) 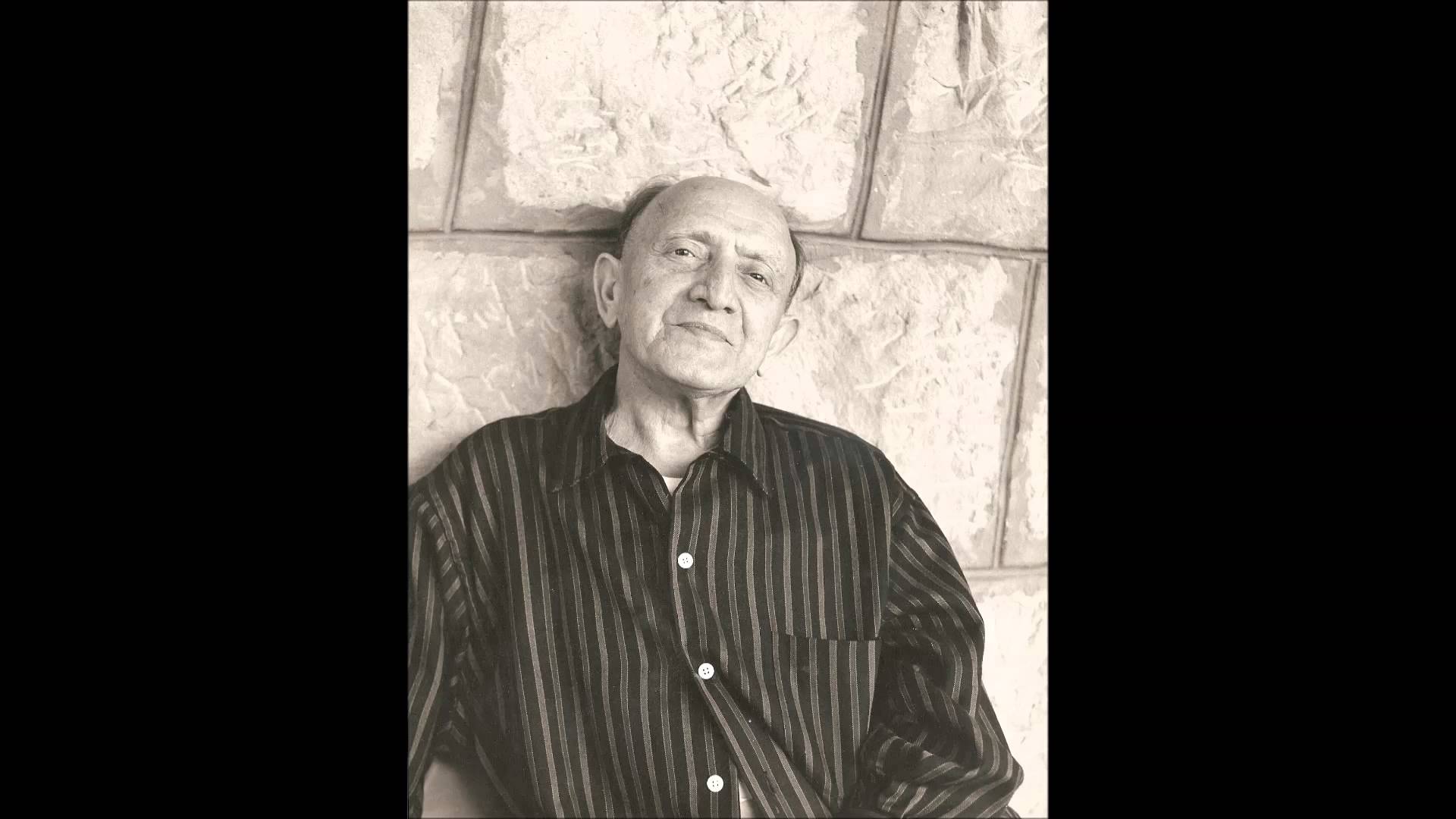 “Today in America, Jewish culture and even Jewish religion has degenerated into ‘Jewish’ nationalism, and Jewish philanthropists, Jewish schools, Jewish segregated services, have been all subverted (with a few noble exceptions) into serving…the upbuilding of the ‘Jewish homeland’…(468)

(A measure of this: Moshe Menuhin had to self-publish his book.)

My guess is that American Jewry is about evenly divided: half is  alienated from all things Jewish; half is under the control of organized Jewry, i.e. the central banking cartel.

This cartel, synonymous with the name  Rothschild, is behind all major wars and depressions of the past 300 years, behind Communism, Fascism and the Holocaust, behind 9-11 and the bogus war on terror. Nothing in this world happens without money and they control government credit.

They need to enslave us in order to protect this world monopoly.  Their goal is to remake mankind into a slave race by destroying the basis of our humanity: nationhood, religion (God), race and family.

This enemy sits at the heart of our political, financial and cultural life. It has co-opted all groups in the same way as it has co-opted Jews. However, organized Jewry is leading the assault on our freedom.

They are the real anti-Semites. They have sacrificed Jews to their agenda before (Communism, Nazism, Zionism)  and will do so again. All Jews will be blamed for the New World Order, even though half are indifferent, and the other half are willing dupes.

— Eichmann told another story of his dealings with the Zionist Dr. Rudolf Kastner, which ultimately resulted in the deaths of countless assimilated Hungarian Jews, and the survival of the fittest Zionist Jews for Israel, Jews who were Kastner’s friends. Eichmann stated, inter alia,

“As a matter of fact, there was a very strong similarity between our attitudes in the SS and the viewpoint of these immensely idealistic Zionist leaders who were fighting what might by their last battle. As I told Kastner: ‘We, too, are idealists and we, too, had to sacrifice our own blood before we came to power.’ I believe that Kastner would have sacrificed a thousand or a hundred thousand of his blood to achieve his political goal. He was not interested in old Jews or those who had become assimilated into Hungarian society.

But he was incredibly persistent in trying to save biologically valuable Jewish blood–that is, human material that was capable of reproduction and hard work. ‘You can have the others,’ he would say, ‘but let me have this group here.’ And because Kastner rendered us a great service by helping keep the deportation camps peaceful, I would let his groups escape. After all, I was not concerned with small groups of a thousand or so Jews.”–A. Eichmann, “Eichmann Tells His Own Damning Story”, Life Magazine, Volume 49, Number 22, (28 November 1960), pp. 19-25, 101-112; and “Eichmann’s Own Story: Part II”, Life Magazine, (5 December 1960), pp. 146-161; at 146.

Hannah Arendt wrote in her book Eichmann in Jerusalem: A Report on the Banality of Evil, “Of greater importance for Eichmann were the emissaries from Palestine, who would approach the Gestapo and the S.S. on their own initiative, without taking orders from either the German Zionists or the Jewish Agency for Palestine. They came in order to enlist help for the illegal immigration of Jews into British-ruled Palestine, and both the Gestapo and the S.S. were helpful. They negotiated with Eichmann in Vienna, and they reported that he was ‘polite,’ ‘not the shouting type,’ and that he even provided them with farms and facilities for setting up vocational training camps for prospective immigrants. (‘On one occasion, he expelled a group of nuns from a convent to provide a training farm for young Jews,’ and on another ‘a special train [was made available] and Nazi officials accompanied’ a group of emigrants, ostensibly headed for Zionist training farms in Yugoslavia, to see them safely across the border.)

A question, would you say that Hollywood and television’s persistent Holocaust and other persecuted Jews narratives are aimed just as much at fostering Jewish paranoia as it is for sustaining European guilt and American sympathy?

When I was in college in Illinois, a Jewish student got an acceptance letter to teach at a college in Georgia.  He asked me, “you grew up in the south. Will the KKK burn a cross on my yard?”   He was serious.  At the time I thought it was just funny, but now I wish I’d asked him what stories he’d been told to make him afraid of traveling south of the Mason Dixon line.

It seems to me television, some movies, and all magazines contain a lot of propaganda directed at keeping Jews herded inside the proverbial Pale.   Much of it is fear based and just as transparent as the phony ‘race war’ propaganda that’s been aimed at blacks and whites the last few years.

On the other hand, the Israeli government tipped it’s hand in 2011 with a commercial in Hebrew directed at young Israelis in college in the United States, urging them not to marry American Jews.   The ad was pulled due to complaints from American Jewish groups.    Israel gov removes ads