Are We Facing another Banking Crisis? 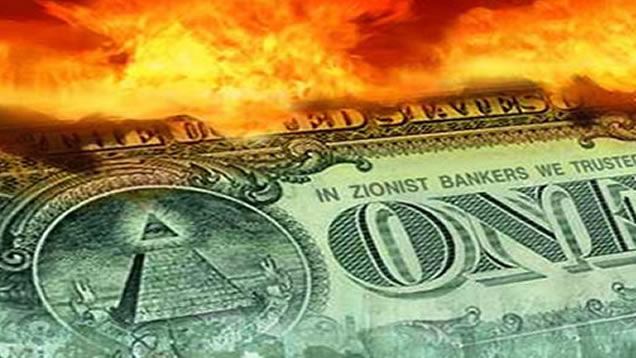 Tony Blizzard: “The total end of today’s financial system presented in the article below will come true unless wholly mis-educated or purposely ignorant “economists” are unceremoniously dumped and common sense restored. Almost the whole world’s exchange mediums are now based on impossible to repay, phony DEBT, created as the bankers’ property at usury, the most criminal scam. “Economists” universally treat this phony CRIMINAL DEBT PRETENDING TO BE MONEY as their MOST WORSHIPFUL GOD WHOSE WHIMS MUST BE MET NO MATTER HOW DESTRUCTIVE.”

ALL THAT IS REQUIRED TO PUT AN END TO THIS POTENTIAL RUINATION OF THE WORLD ECONOMY IS TO REPUDIATE THIS CRIMINAL, PHONY DEBT TO THESE VICIOUS CRIMINALS AND EACH NATION PRODUCE ITS OWN REAL MONEY, WHICH IS SPENT INTO CIRCULATION TO STAY FOR THE USE OF ALL AT NO EXPENSE TO ANYONE.

MONEY IS MEANT TO BE A MEASURE OF THINGS EXCHANGED, NOT THE PRIVATE PROPERTY OF THE MOST HEARTLESS, THIEVING CRIMINALS THE WORLD HAS EVER EXPERIENCED WHO CONSTANTLY MANIPULATE THIS MEASURE, DISTORTING IT UP OR DOWN, CHANGING ITS PURCHASING VALUE, FOR THEIR PERSONAL PROFIT AT THE EXPENSE OF THE REST OF MANKIND.

Warnings of Financial Armageddon from the City of London

Former Governor of the Bank of England Mervyn King has let the cat out of the bag during an IMF meeting on October 19, 2019 when he said the world was heading towards a “financial Armageddon” unless central banks are given more freedom to print infinite amounts of money to bailout Wall Street as had been done in 2008-2009 when he was governor. 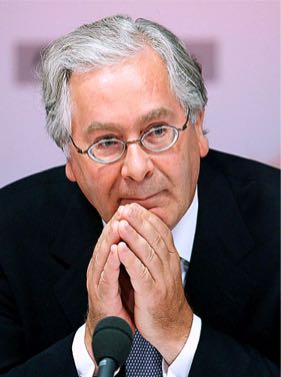 As King spoke these ominous words, the NY Federal Reserve found itself in its 5th week of daily money printing (begun on September 17) which has seen $50-$100 billion/day pumped into failing too-big-to-fail banks with “emergency liquidity injections”.

On October 24, the Fed had to raise the overnight repo loan limit from $75 billion to $120 billion/day and its two week repo limit from $35 to $45 billion per auction.

Lord King stated “By sticking to the new orthodoxy of monetary policy and pretending that we have made the banking system safe, we are sleepwalking towards that crisis.”

At the meeting, the British Lord correctly asserted that the systemic causes of the meltdown of 2009 were never resolved, but then Delphically lied saying that the financial regulations installed under Obama (Dodd-Frank) are currently preventing the scale of money printing needed to encourage economic growth and keep the system from collapsing.

The last part of that statement is additionally fraudulent since Lord King tried to equate “economic growth” with “bank bailouts”. These terms are actually antagonistic to each other.

The deregulation needed to unleash the money printing advocated by King is in fact a ticket to a hyper inflationary blowout of the system which currently sits atop an $800 trillion derivatives bubble (bets on collateralized debt and insurance on those debts).

When one considers that in 1992 derivatives only accounted for a mere $2 trillion and didn’t even exist as speculative instruments in 1986, one gets a sense of how the nation-state-destroying time bomb has been implanted into the western system, waiting only for the trigger to be detonated at the opportune moment.

Referring to the “Green New Deal” which the Wall Street- City of London cabal are lusting after as the basis for a new world system, King said: “No one can doubt that we are once more living through a period of political turmoil. But there has been no comparable questioning of the basic ideas underpinning economic policy. That needs to change.”

Current Bank of England Governor Mark Carney has gone on a global campaign in recent months to coral the financial, political and business elite into supporting his design for a new hegemonic global currency modeled on Facebook’s Libra as a replacement to the U.S. dollar-based system.

This “hegemonic digital currency” would be tied to Carney’s other passion: the “de-carbonization” of the world (which is actually just a euphemism for depopulation). The “new rules of the system” which Carney, King and their oligarchical masters demand be imposed upon nations in the face of the meltdown of the banking system are tied to the creation of financial incentives to green economic investments such as solar and wind energy, which inherently lower the means of industrial capital production and thus contract the “carrying capacity” of the population to “sustainable levels”.

Taking a threatening tone, Carney has said “the firms that anticipate these developments will be rewarded handsomely. Those that don’t will cease to exist”.

It is interesting to note that Carney and his technocratic zombie associates including French Finance Minister Bruno LeMaire have warned that if this Green New Deal isn’t imposed soon, then China’s New Silk Road will become the basis of a new world system!

These warnings reflect the Achilles heel of the City of London-Wall Street centered oligarchy currently trying to impeach President Trump. These oligarchs and their technocratic managers such as Carney, King and LeMaire (who so yearn to be “alphas” in the dystopian Brave New World) know that the United States, allied with the new Russia-China-India alliance would create a force powerful enough to not only re-organize the bankrupt financial order under bankruptcy reorganization but would also create a positive multi-polar alliance which could eliminate the inbred oligarchical cancer from the face of the earth once and for all.

Matthew Ehret is the founder of the Canadian Patriot Review, author of the book series The Untold History of Canada and can be reached at canadianpatriot1776@tutanota.com

Related – Anthony Migchels – Return to Gold Standard Would be a Disaster 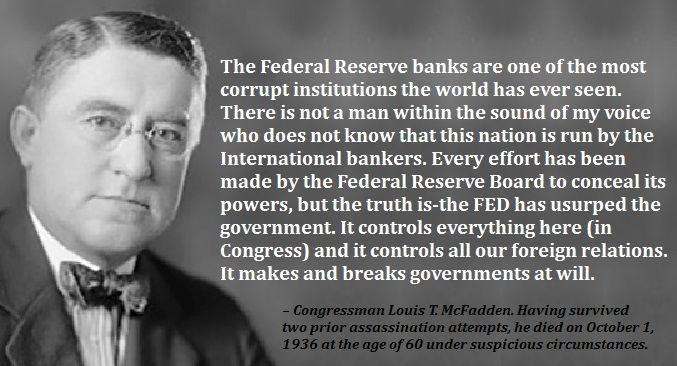 In 1934, Chairman (for over ten years ) of the US House of Representatives Banking and Currency Committee, Congressman Louis T McFadden condemned the private credit monopoly of the central bank ( the Fed )  in toto.  In his speeches he did not go after the bankers, he went after the Congressional leaders that had enacted the legislation that saw the abdication of the US Dept of Treasury of its Constitutional power to issue the currency.  He saw the issue not so much in terms of the private interest – namely the Jewish Money Power – but rather as those in high office who had abdicated power to it.

The only way to make these regular crises stop is for nations must to back the power of the currency issue.  Louis T. McFadden authored the McFadden Act of 1927 in an effort to prevent the Fed from bankrupting itself and collapsing the economy in the first ‘too-big-to-fail’ exercise.  All the evidence the US Congress needs to see is in the findings of the Banking and Currency Committee and has been available through the Congressional Record since 1933.

According to McFadden, their charter – legislated by Congress and signed over by the US Dept of Treasury ( in the abdication of its Constitutional powers)  was written in fraud and must be voided as written in fraud by the legitimate sovereignty.

Congressman McFadden, as one would expect, met with a series of very unfortunate events.  This is because once the credit monopoly is abdicated by legitimate sovereignty, false sovereignty is created – namely: the Money Power.  Of which the Elders of Zion state in their Protocols: “Our sovereignty is in money as in all else” because with the sovereignty of the credit monopoly they buy every other power – holding the government as a mere asset of their cartel and the population as ‘bonded entities’. https://archive.org/stream/pdfy-FZ5tDqjalMhV2U4i/Congressman-Louis-T-McFadden-on-the-Federal-Reserve-Corporation_djvu.txt

On May 23, 1933, McFadden brought charges against the Board of Governors of the Federal Reserve Bank System, the Comptroller of the Currency and the Secretary of the United States Treasury for numerous criminal acts, including but not limited to: conspiracy, fraud, conversion and treason.  His petition for Articles of Impeachment was referred to the Judiciary Committee and has yet to be acted upon.  The time to act upon it is now. http://home.hiwaay.net/~becraft/mcfadden.html.