The extermination of Polish elites by both occupiers

Poland and Poles in the Second World War

Terror in Poland inflicted by occupiers 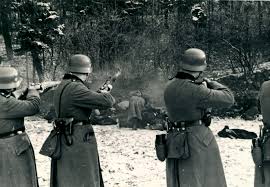 The execution of 51 residents of Bochi and surrounding areas on December 18, 1939 in the forests of Uzbornia in retaliation for an attack on a German police outpost which was carried out by members of the conspiratorial organization “White Eagle” Photo: Institute of National Remembrance.
In Poland, 40% of those who had completed higher education did not survive the war, a rate of almost double that of the general population. This was the result of a calculated policy employed by both occupiers, especially Germany.

For Hitler it was clear that the key to controlling Poles and Germanizing their lands was to remove the ruling elites. Preparations began already in the Spring of 1939, creating lists of individuals destined for execution: intellectuals, civil servants, priests and religious leaders, entrepreneurs, political and social workers. The physical liquidation of Poland’s elites began within the framework of the Intelligenzaktion, which began during the September campaign and was continued practically until the end of the occupation. At the onset of the war, this was the task of the Einsatzgruppen, special German units which moved behind the army’s front and were responsible for local governing offices, heavy industry, arts collections and most of all, locating, detaining and murdering people. By the end of 1939 in the lands incorporated into the Reich over 40,000 people were killed, of which 30,000 were in the Pomeranian Region. Tens of thousands of people were sent to camps in Oranienburg, Mauthausen and Dachau, which more often than not served as a death sentence.

As a result of the terror and deportations by 1940 Polish intelligentsia all but vanished from the Polish territories incorporated into the Reich. Although Germans in the General Government were less adequately prepared to properly deal with Poland’s elites, by the end of 1939 they too managed to murder 5,000 members of the Intelligentsia, and the most renowned act of repression was conducted on November 6, 1939 – the Sonderaktion Krakau – which saw 183 professors of the Jagiellonian University and AGH University of Science and Technology arrested and sent to their death in Sachsenhausen. The brutal repression of Polish elites began in the General Government with Aktion AB (May-July 1940) when 3,500 Polish elites, including the Olympian Janusz Kusocinski and Poland’s Speaker of the Parliament Maciej Rataj, were murdered in Palmiry outside of Warsaw. Those arrested during Aktion AB became the first prisoners of KL Auschwitz. Subsequent waves of repression came after the invasion of the Soviet Union and the occupation of Poland’s eastern region by Nazi Germany, where local elites had already suffered at the hands of the Soviet occupiers.

Members of the elite who avoided execution or imprisonment in the camps were left on the margins of society without the means to make a living after Polish cultural and educational institutions were closed. A large group of artists, writers and scientists were supported by the underground government.

Although in the regions occupied by the Soviet Union terror was instituted on the basis of class and not race as was the case in German occupied territory, nevertheless due to the nature of the social structure of the II Polish Republic, the Soviet repression hit first and foremost at Poles who were the predominant political, economic and cultural class in this region. They were also acutely affected by deportations in the years 1940-1941 (See Forced migrations) as well as arrests (150,000 – of which 40,000 lost their lives). Subsequent waves of repression affecting both civilians as well as underground soldiers arose during the successive conquest of this region by the Red Army starting in January 1944.

Terror. The extermination of Polish elites by both occupiers

Forced migration and Resettlement of Poles

During wartime Poles were forced by both totalitarian regimes, Nazi Germany and Soviet Russia, “to migrate this way or that way by which was often justified by pseudoscientific reasons” ( Hans Lemberg )

As early as Fall 1939 experts in Berlin discussed how to removed several million Poles and Jews from the Polish territories which had been incorporated into the Reich. By the Spring of 1941, at least 840,000 people were brutally uprooted from their homes and stripped of all their possessions. Of these 365,000 were deported to the General Government. The first to be removed were members of the elite, being bearers of Polish culture and identity in the region and which could thus form the basis of a resistance movement.

A similar policy was pursued in Poland’s occupied eastern territory by the Soviet authorities. The first to be deported were officers, policemen, civil servants, landowners, members of the middle class or landowning farmers. The first mass deportation was carried out on the night of February 9-10, 1940. The fourth and last mass deportation ended but a few hours before the German invasion of the USSR in June 1941. In total, close to 330,000 Polish citizens: Poles, Jews, Byelorussians, and Ukrainians were deported to Kazakhstan, Uzbekistan and Siberia. Many of the deportees, due to the harsh conditions and inhumane treatment by the Soviet authorities, did not survive the journey or their exile in Siberia or Kazakhstan. A portion of those who survived bolstered the ranks of the Anders Army and the Polish “People’s” Army.

The German defeat of the Soviet Union was supposed to enable the execution of Heinrich Himmler’s General Plan East, which planned for the deportation and resettlement of 45-50 million people, including Poles, east of the Ural mountains. The Zamosc Region was to serve as a laboratory to test this operation. From November 1942 to August 1943, 300 Polish villages where 110,000 Poles lived underwent resettlement. This action, carried out with extreme brutality, became one of the most iconic acts of oppression by the occupier in Poland, and the region is a symbolic place of remembrance.

In as much as the actions in the Zamosc region were a calculated act, another and one of the largest migration in the Second World War was a quasi-spontaneous decision: the mass exodus of several hundred thousand Varsovians after the collapse of the Warsaw Uprising in 1944. The forceful removal of the residents of Warsaw and the systematic destruction of whatever parts of Warsaw remained standing was meant to punish and terrorize Polish society and serve as an example for the rest of still occupied Europe.

Also in the Fall of 1944 began the wide scale resettlement (falsity labeled as “repatriation”) of Poland’s eastern lands. Poles who found themselves to the East of the Bug River and thus no longer on Polish territory after the Allies modified Poland’s eastern border were transplanted Westward, and Polish Ukrainians and Belarusians were sent Eastward. Both migrations, although governed by international agreements, often differed little from wartime deportations.

Forced migration and Resettlement of Poles

The balance after 6 years of warfare was terrifying. Close to 5.5 million Polish citizens were killed, including 3 million Jews. A small fraction (250-300,000) died on the battlefield, the rest were victims of  mass executions, bombardments, hunger and horrific mistreatment in concentration camps or the elements. It is difficult to tally those who although having survived the war, for the rest of their lives carried, or still carry, the psychological or physical effects of the conflict.

Of Poland’s pre-war border, only the coastline and the southern border remained constant, since the whole country, against wishes of the nation and their legal government, was moved from the East to the West.

This entry was posted on October 2, 2019 by HKW in Uncategorized and tagged Extermination of Polish elite, Forced resettlement of Poles, History, Polish holocaust, Terror in Poland, WW2.