There was no hiding about what was to be done to the Polish nation. It was clear to those involved as to what must be done.

Let us never forget the crimes committed against the Polish people.

Today marks 80 years since the start of the invasion of Poland by Germany and the USSR, in concert, in 1939. An invasion that began World War II.

The Nazi-Soviet joint parade of 1939 in Poland that some deny, in video
This is how the Communist Party of Spain Justified the Nazi-Soviet Invasion of Poland

NOTICE: The images that appear in this post may hurt your sensitivity.

As I have pointed out other times, on August 23, 1939 the dictatorships of Hitler and Stalin signed a pact in Moscow that included secret clauses that were discovered and published by the British in 1945, but that the Soviets denied until 1989 -50 years after the invasion- when the USSR finally recognized the secret part of the pact, for which Hitler and Stalin divided Poland, Lithuania, Latvia, Estonia and Finland. A cast that began with the joint invasion of Poland –Germans and Soviets came to parade together on Polish soil– that continued with the failed Soviet invasion of Finland in November 1939, and culminated in 1940 with the invasion and annexation by the USSR of the Baltic republics. 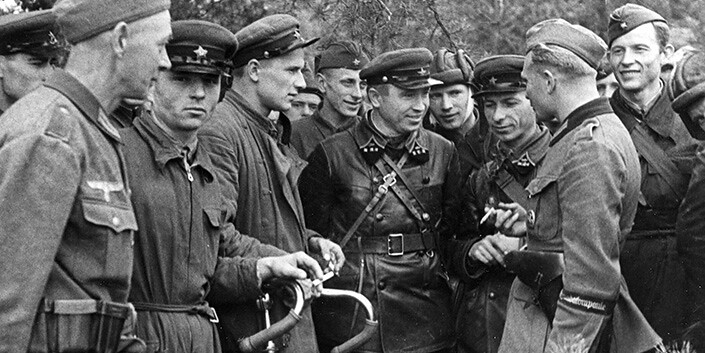 German and Soviet soldiers fraternizing in Brześć Litewski, Poland (today Brest-Litovsk, Belarus), where their forces met during the joint invasion agreed by Hitler and Stalin.

The effects of the alliance between Hitler and Stalin

In a clear example of cynicism, the USSR Foreign Minister Molotov announced: “Our pact means that the major European powers have agreed to eliminate the threat of war and live in peace.” A few hours later Germany invaded Poland. Today we know, because the telegraphic correspondence between the two allies has been published: Nazis and Soviets coordinated their attack against Poland, to the point that they arranged the Soviet excuse to invade the eastern part of Poland, which would be to “put an end to the intolerable existing political and economic conditions in these territories” before the fall of the Polish Government. This alliance between Nazis and Soviets also involved the defense of the invasion by the Communist Parties under Moscow (I already spoke here of the case of the Communist Party of Spain) and the sabotage of the Communists to the war effort of France against the German invasion from the country. I remember these facts, still unknown to many people today, to point out to those guilty of what I am going to show you next, which is just one of many pain stories that the Polish people suffered in those days.

Kazimiera Kostewicz was a 12-year-old Polish girl when the war began. She and her family – there were a total of seven brothers – lived in Warsaw, on a 35-square-meter apartment near the Powązki cemetery. It was a poor family and they shared that small apartment with another family, a total of 13 people. Her father was unemployed and they were not hungry thanks to their mother’s caretaker job. The youngest brother, Tadzio, was only 3 months old when the war broke out. Kazimiera had a special affection for her sister Andzia, two years older than her, very intelligent and she was a good student. When Andzia finished seventh grade, she wanted to continue studying, but she had no money to pay for textbooks and clothes, so she wrote a letter to the editor of the newspaper “Kurier”. One day, finally, she received the editor’s response: “Don’t worry, Annie. You will get clothes, you will get books. Your dad will get a job.” It seemed that things could start to go well for the family, but then the war began.

During the invasion of Poland, the Germans violated the Geneva Convention by indiscriminately attacking the civilian population and bombing completely defenseless residential buildings. In one of those attacks, the small apartment where Kazimiera lived with her family was burned, so they had to move to a friend’s house. They were hungry. Her mother learned that on Tatarska Street there was a cabin with an orchard where they had paws, cabbage and onions. On September 13, 1939, Kazimiera’s parents went to see the owner of the cabin to buy some potatoes. Andzia and an aunt of his accompanied them. It was a day with a clear blue sky. Suddenly, the engines of two German planes roared over their heads, throwing bombs and opening fire with their machine guns.

At that time, seven women gathered potatoes in that garden, and dispersed in different directions. Andzia and her aunt took refuge in the cabin, but it collapsed on them because of the attack. The aunt was unharmed. Andzia managed to get out of the cabin and threw herself on the ground in the countryside. It seemed that the airplanes began to move away, but then one of them turned and fired their machine guns at the garden where the women were, dropping a bomb in the middle of the field. Andzia was hit by two bullets, one in the neck and one in the spine, in addition to receiving shrapnel in one of her shoulder blades. The 14-year-old girl came to press her hands against her wounds before falling dead in the grass. Andzia’s father was also injured during the attack due to shrapnel.

Kazimiera accompanied her mother to the place of the attack, near the crossroads between Jana Ostroroga Street and Tatarska Street. That was when the girl saw her older sister dead and burst into tears. At that time there was an American reporter, Julien Bryan, whose photos and footage served to show the world the horror of the German bombings in Poland in 1939. He was who took the series of photos that I show you below. 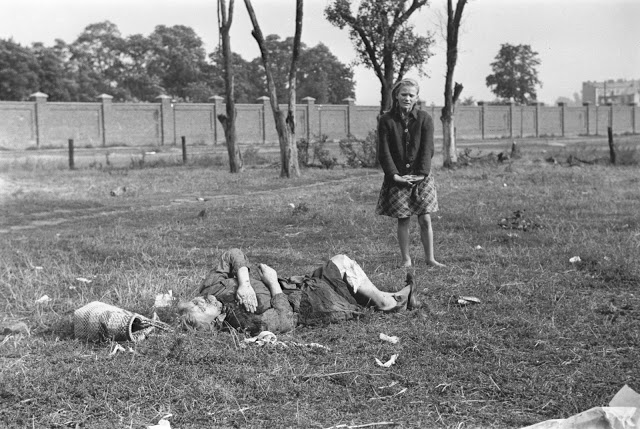 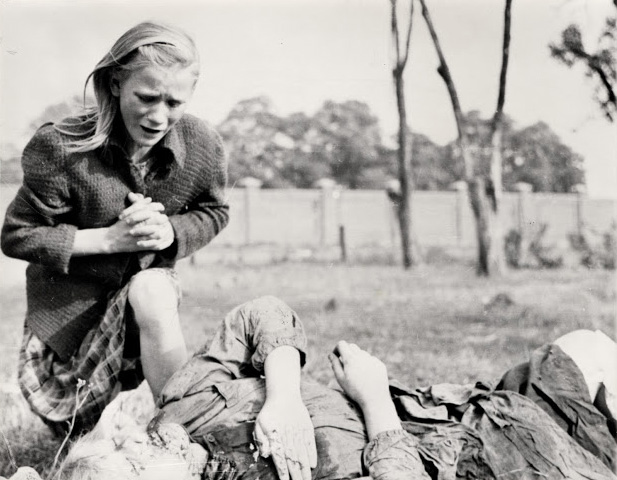 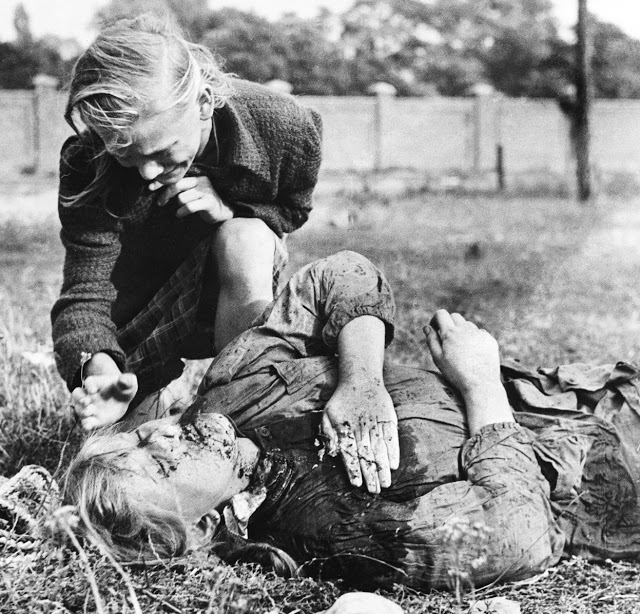 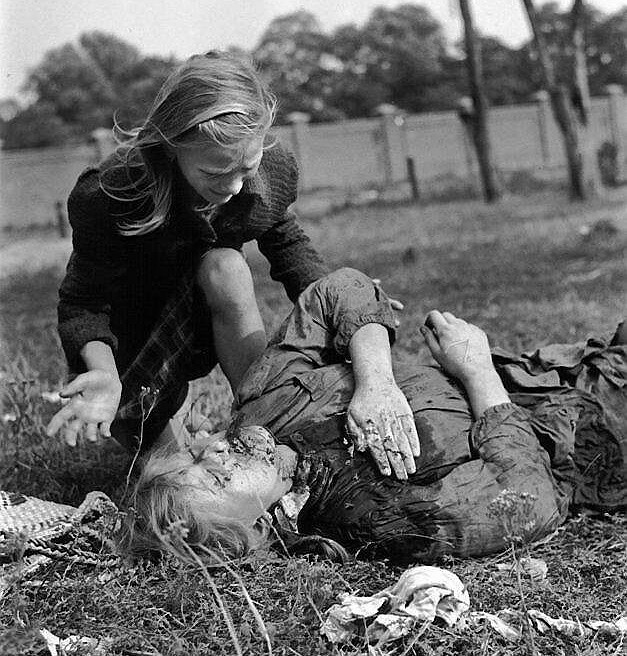 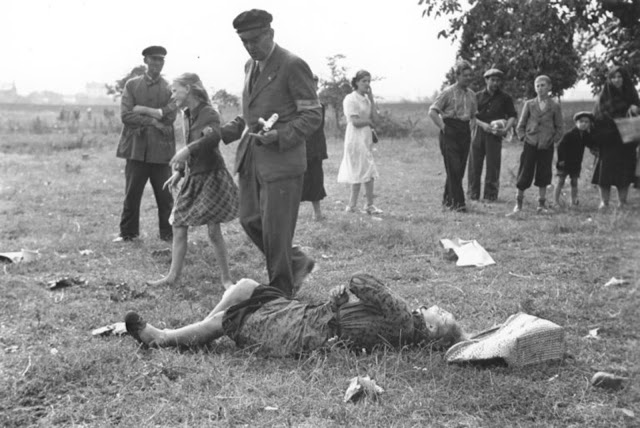 Moved by the scene, Julien put aside his correspondent role and ended up hugging Kazimiera to try to give her some comfort. 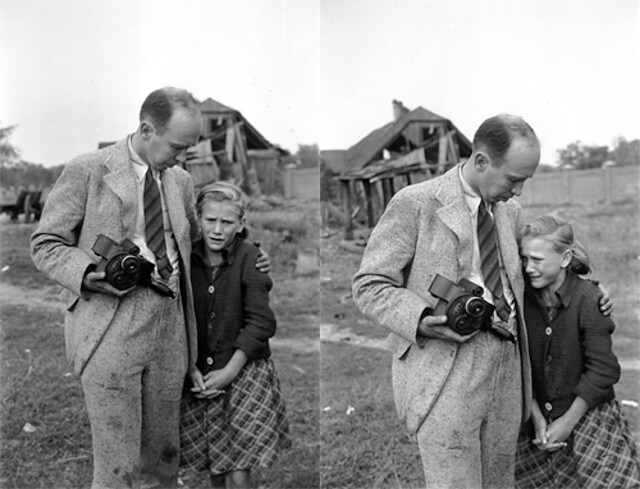 Kazimiera survived the war, as did her parents. As for his brothers, in addition to Andzia, little Tadzio also died in 1940, with a year and a half of life. The baby was so hungry that he came to suck blood on her mother’s chest. Kazimiera’s photos went around the world and moved millions of people. These images managed to defeat the lies of the Nazi and Soviet propaganda about the invasion of Poland. Kazimiera met again with photographer Julien Bryan when he visited Warsaw in 1959. Bryan passed away in 1974. In 2009, Kazimiera met the photographer’s son, Sam Bryan. 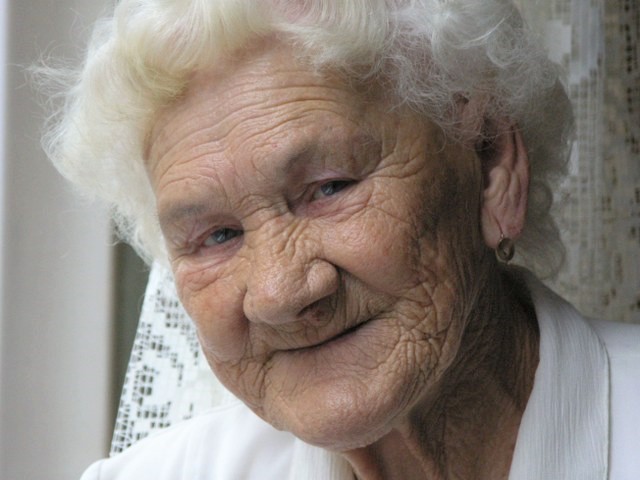 Kazimiera still lives. She is the only one of her brothers who continues to live. She married, going on to be called Kazimiera Mika, and today has four grandchildren and six great-grandchildren. In the photos taken by Julien Bryan, the walls of the Powązki cemetery are seen in the background, which remain the same today. The streets Jana Ostroroga and Tatarska also keep their names (the second one is named because it borders the Tatar Muslim cemetery). A few years ago the Polish blog Warszawskie Obrazy placed the field where Kazimiera’s sister died approximately at the site currently occupied by the headquarters of the Headquarters of the Military Gendarmerie of the Polish Army. You can see it under these lines in Google Maps and Google Street View.

I dedicate this post to the Polish people. Of all the countries that were affected by World War II, Poland was the nation that lost the highest percentage of the population: 15% of the inhabitants of that country in 1939 died due to the war and the atrocities committed by Germans and Soviets. In total, more than 6 million souls.

Nazi war criminals escaped prosecution because crucial evidence in Britain’s National Archives and in government archives in the United States was ignored for decades.

This entry was posted on September 14, 2019 by HKW in Uncategorized and tagged German Nazis war crimes.