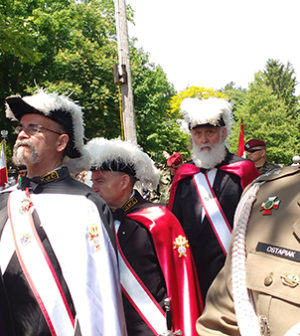 “It is my pleasure to welcome you to our community for the 101st anniversary and pilgrimage commemoration organized by the Canadian Polish Congress, Niagara District”,  said Lord Mayor of Niagara-on-the-Lake, Pat Darte on June 11th, 2018.

To answer this questions we must go back in time to 1914. 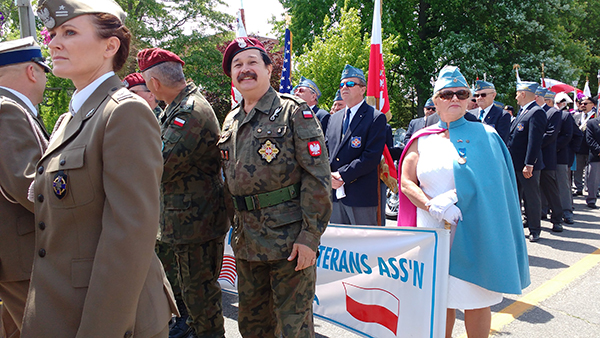 In 1914, Europe’s First World War just started. But, if you tried to look for Poland on the map at that time, you’d have no luck. Poland did not exist after 1795 because three “nice” neighbours (Russia, Austria and Prussia-later Germany) decided to divide the Polish Kingdom amongst themselves. However, even though Poland did not physically exist on the map, the Polish people were very much alive. Despite speaking Russian or German, and their country Poland being split up, they kept tradition, religion and language, while dreaming about a “Free Poland”.  Some emigrated, like Chopin, who composed his Mazurkas and Polonaise in France, or Mickiewicz, who wrote his poems in Switzerland. Others worked as talented scientists, craftsmen… continuing their day jobs. Many brave and patriotic Poles tried to fight for independence, but in vain. Two biggest uprisings (1830 & 1863) failed and, as a consequence, thousands Poles were executed, sent to prison or exiled to Siberia by their occupiers. So, when the First World War began in 1914, and all 3 “neighbours” were involved, Poles saw a hope and a chance for their country to be independent again. In spite, millions of Poles were drafted to the German, Russian or Austrian armies. But they were not interested in their occupiers business and did not want to fight against each other, so, as you can suspect, a lot of them deserted, or volunteered as Prisoners of War (POW). Not, because they were cowards, but they didn’t wanted to fight for Russia, Germany or Austria – they wanted to fight to free Poland!

In 1914 other Polish patriots living in Europe and America, like world renowned pianist Ignacy Jan Paderewski, were tirelessly working on political grounds for the independent Poland. The League of the Nations and countries including the USA looked favorably on this idea. But, as we know, freedom does not come cheap.

France in the picture.. June 4th, 1917, French President Raymond Poincaré allowed a Polish Army to be created in France. Polish patriot General Jozef Haller was chosen to be in command of this Blue Army, a name which was drawn from the soldiers’ blue uniforms. 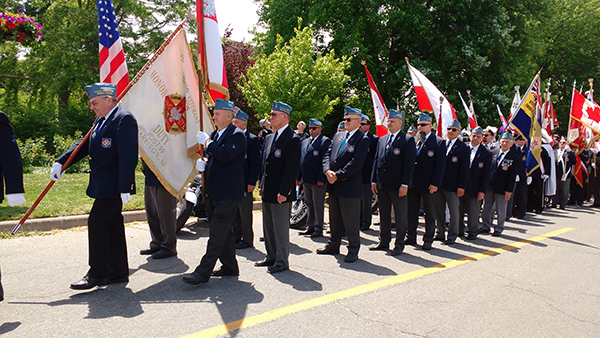 The dream of  Independence was “an inch” closer to becoming a reality… Polish people in the USA cultivated Poland’s dream of independence through a powerful patriotic organization known as “SOKOL”, or falcon in English. Besides having a love for their non-existing country, Polish people were very fit, through rigorous and regular gymnastic exercises during their youth. In 1917, Dr. Teofil Starzynski – President of “SOKOL”  got approval from the President of the United States of America, Woodrow Wilson, to coordinate recruitment to the Polish Army in France. There were over 20,000 volunteers in the USA and Canada who wanted to fight to free Poland. Many of those young men were Polish-Americans and Polish-Canadians, a few even came from Brazil. In 1917 Canada also supported an independent Poland and allowed a military training camp to be created in Niagara-on-the-Lake, Ontario for all those recruits. It was named “Kosciuszko Camp” after our Polish and American hero of the 18th century General Tadeusz Kosciuszko.  Many of those volunteers gathered in October 1917 at St. Josaphat Church in Detroit, Michigan for a special mass before heading to Camp Kosciuszko in Canada, and after that to France, to join the Blue Army as a soldiers. Unfortunately, not all of them who wanted to fight for Poland joined the Blue Army in France. During their military training in Niagara-on-the-Lake, the Spanish flu outbreak did not spare the Kosciuszko Camp and over 40 young men died there. Twenty-six of these victims were buried in the cemetery, behind the St. Vincent de Paul Church in Niagara-on-the-Lake. 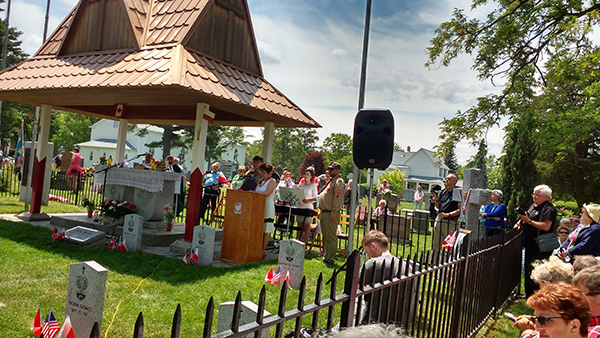 Meanwhile in Europe  the First World War was in full bloom, while the political situation was changing like the colours in a kaleidoscope.  Despite losing the war, the three neighbours never intended to give up Polish lands and reinstate Poland.  However the Russian Tzar was overthrown by the Bolshevik Revolution, the Austro-Hungarian Empire collapsed and the Germans were on the losing side of the war, so, as you can suspect, their voice did not count at all. Independent Poland was still a dream, but that dream was about to become reality…

The Blue Army supported the Allies in World War I, so the Allies and world leaders agreed that Poland had to be recreated! November 11th, 1918  was not only the end of the war, but it was also the day when Poland regained independence and once more was present on the map of Europe. After waiting 123 years, the Polish people finally had a country of their own again.  Poland was resurrected!

This year’s event also gathered a big crowd in Niagara-on-the-Lake, Ontario. From near and far people came to participate in the colourful parade and commemorative mass, where twenty-six young volunteers, who never made it to France, were laid to rest in 1917. Men are dead, but never forgotten! These graves, well kept and maintained by the Polish Embassy in Ottawa, Canada, are decorated every year with many wreaths from various Polish, Canadian and American organizations and individuals. People from Poland, Canada and the USA continue to visit the area; from diplomats to Polish and Canadian military men, veterans, youth, and ordinary citizens. For one century, this event helps remind us of the patriotic intentions all these recruits had.

“We pay our respect again this year to the many valiant Canadian and American volunteers, who joined the Polish Army units and fought courageously to help Poland regain independence in 1918” ;

“This annual event serves as an important reminder of the special relationship between Polish and Canadian forces during the First and Second World Wars. The legacy of this relationship now lives on through the many generations of Polish Canadians and the contributions to our life here in Niagara” … concluded Pat Darte-Lord, Mayor of the Niagara-on-the-Lake, in his letter.