The Myth of Nazi Persecution of Gays 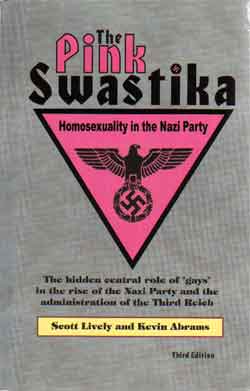 The authors tackle the politically-charged question of the homoerotic and homosexual nature of the Third Reich leadership. It is a serious scholarly work exposing a wealth of information on the following basic points:

2) The top and central most Nazi personalities and groups (SA, SS) which constructed the Third Reich were predominantly macho-types of male homosexuals or bi-sexuals.

3) Rohm and the SA “brownshirt” leaders were all homosexuals, and were killed by Hitler (Night of the Long Knives) and Nazi laws were passed against homosexuality only after their own outrageous open street sex-orgy parties and pedophilia behavior was being roundly criticized in the German press, thereby threatening Hitler’s support base among heterosexuals. Policies of concealment thereafter prevailed.

4) Beyond the suppression of the SA, these laws were rarely enforced, and then only when politically helpful to the Nazi cause.

5) Only a few thousand authentically homosexual men (and no lesbians) were condemned to the death-camps by the Nazis. These were nearly always either political enemies of the Third Reich against whom such charges were a convenient excuse to dispose of them, or passive-receptive homosexual “femmes” — homosexual men of softer feminine qualities — and whom the macho leather-clad homosexuals always viewed (along with women) with terrible contempt.

7) The swaggering macho muscular nature of the SS and SA units, their overt pedophilia, sadist-masochistic sexual predelictions, their sadistc cruelty against heterosexuals, women, and other cultures not sharing their pathology, is detailed.

The authors also chastise modern homosexual activist groups, and homo-sympathetic historians, for widespread distortion of these facts, which are abused to create the false image of homosexuals as “victims” of the Third Reich, comparable to the genocidal attacks against Jews, Gypsies, or Slavs. Their role inside the Third Reich, as partial architects of the Final Solution and other reprehensible Nazi policies, is nearly always never mentioned. Out of this comes a brand of aggressive if not fascist “political correctness” which labels any criticism of organized homosexual or bi-sexual conduct — even as outrageously pathological as in the “gay” bath-houses, or as seen in things like the Fulsom Street Festival in San Francisco, or the various “Gay Pride” parades, or as advocated by criminal groups like NAMBLA — as “hate speech”, or even “hate crimes”.

The book caused a furious reaction within the homosexual activist groups of the West, but no serious scholarly rebuttals. It becomes all the more important for modern times when one considers the widespread sexual pathos within Saharasian cultures, in the Muslim world, where pedophilia and macho-male homosexuality is predominant (though never defined as “homosexuality”), even while softer “femme” homosexuals (and women) can be legally murdered for their independent sexual expression.

SOME CRITICISM
If one can say that only a few thousand homosexuals died in the death-camps, it is also equally true, that only a few thousand German Christian leaders dared to stand up to the Third Reich, against their larger war-making and “uebermench” agendas. So long as Germany was on the winning side of the bloody shooting war, with more “lebensraum” and French or Polish slaves kidnapped into the fatherland to do the hard back-breaking work, typical German Christian citizens were quite happy to follow Herr Hitler towards the construction of a “Thousand Year Reich” where they could keep their personal boot-heels on other people’s necks, homosexual or not.

I give the book 5 stars in spite of this incapacity for self-criticism of the Christian viewpoint, if only because this entire subject has not been subjected to the open review and scholarly discussion it deserves. The book may serve this purpose, to open up such a discussion, assuming it is not simply hammered out of existence by the angry factions of the homosexual-rights movement. If that happens, it would only tend to affirm the authors claims.
—

When Kevin Abrams and Scott Lively published the first edition of this book in 1995, they knew that it would cause controversy, contradicting as it does the common portrayal of homosexuals as exclusively victims of the Nazi regime. For this reason they were extremely  scrupulous in their documentation of homosexuals as the true inventors of Nazism and the guiding force behind many Nazi atrocities. They purposefully drew heavily upon homosexual writers and historians for the source material and used direct quotations from their writings whenever possible. The remainder of their sources are primarily mainstream historians of the Nazi era. Kevin and Scott chose to place their citations in the text rather than in endnotes to emphasize the reliability of our sources.
” …  The Pink Swastika addresses an aspect of Nazi history unfamiliar to most people, historians included… “

” …   Historically, male homosexuality was much more often associated with hyper-masculine warrior cults which were usually very brutal and very politically aggressive. The most recent example was in Germany. Hitler’s initial power base when he launched the Nazi Party was a private homosexual military force organized and trained by a notorious pederast named Gerhard Rossbach. Rossbach’s homosexual partner Ernst Roehm, who was also Hitler’s partner in forming and building the Nazi Party, converted the “gay” Rossbachbund into the dreaded SA Brownshirts.”

“Many of the [S.A.’s] top leaders, beginning with its chief, [Ernst] Roehm, were notorious homosexual perverts.” wrote the preeminent historian of the Nazi era, William Shirer in The Rise and Fall of the Third Reich.

It was no coincidence that homosexuals were among those who founded the Nazi Party. In fact, the party grew out of a number of groups in Germany which were centers of homosexual activity and activism.  Many of the characteristic rituals, symbols, activities and philosophies we associate with Nazism came from these organizations or from contemporary homosexuals. The extended-arm “Sieg Heil” salute, for example, was a ritual of the Wandervoegel (“Wandering Birds” or “Rovers”), a male youth society which became the German equivalent of the Boy Scouts. …”

“Storm Troopers” or SA also known as the Brownshirts recruited boys into homosexuality from their local high schools.

” …  The Wandervoegel was started in the late 1800s by a group of homosexual teenagers. Its first adult leader, Karl Fischer, called himself “der Fuehrer” (“the Leader”) (Koch:25f).  Hans Blueher, a homosexual Nazi philosopher and important early member of the Wandervoegel, incited a sensation in 1912 with publication of The German Wandervoegel Movement as an Erotic Phenomenon, which told how the movement had become one in which young boys could be introduced into the homosexual lifestyle (Rector:39f). The Wandervoegel and other youth organizations were later merged into  the Hitler Youth (which itself  became known among the populace as the “Homo Youth” because of rampant homosexuality. – Rector:52)….”

Here, on May 10th, 1933, the Nazis are seen holding their infamous “book burning.”  However, the bulk of the smoldering pile is not made of books, but of the records of Nazi perversions stolen from the Sex Research Institute of Berlin four days prior.

“Masculine-oriented male homosexuality tends also to be pederastic in nature,” continued Lively, “meaning that it often involves relationships between adult men and teenage boys. The ancient Spartan army, for example, drafted young teens boys and paired them with adult homosexual soldiers. Brownshirt leaders in Germany recruited boys from the local high schools for sex. Roehm himself once briefly fled Germany for South America over a scandal involving a young male prostitute. … ”

The Pink Swastika, now in its 4th edition, offers nearly 400 pages of documentation on the thesis that the Nazi Party was entirely controlled by militaristic male homosexuals throughout its short history. For more see www.defendthefamily.com.

Hitler himself was descended from the the Ashkenazi Jews and Africans he hated.

Hitler’s Y lineage was haplogroup E1b1b (all biological descendants of the same common male ancestor through the direct patri line will carry this set of Y chromosomal markers).