RISE OF THE SLAVS |


History and Mythology of the Slavs

The Hidden Story of Poland: What Happened to the Forgotten Kingdom of Lechia?

The history of Poland has been misunderstood for decades. Even now, many official texts say that Poland comes from the tribe called Polanie. And according to the stories written by Christian writers, that was the first kingdom formed in these lands. However, the truth is very different.

There is a marble plaquette in the Museo del Lapirdario di Urbino in Italy with an inscription saying “Cavillio Lescho Ti Claudius Buccio Columbiara IIII OLL VIII Se Vivo a Solo Ad Fastigium Mancipio Dedit.” That means “a dedication from Tiberius Claudius to Avillo Leszko, the ruler of Kingdom of Lechia.” Tiberius offered the other ruler a grave for funerary urns, which Avillo Leszko received while he was still alive. It was a very expensive gift, showing the importance of the ruler from the lands of modern day Poland.

This inscription means that the Roman Empire had connections with the Kingdom of Lechia. Moreover, its forgotten king was acknowledged by a Roman emperor. The story about the kingdom was well known for centuries, but it doesn’t appear in history books at school. Officially, the story of Poland starts in 966, with Mieszko I and his tribe called Polanie. Regarding the history of Poland, authors usually start with stories about tribes that lived in the area, but later they explain that the first ruler was Mieszko I, who lived during the 10th century.

The Kingdom of Lechia had kings who are completely ignored in most of the books about Poland. However, the existence of the kingdom is confirmed by maps created by ancient historians and cartographers. The first known map which shows this kingdom comes from c. 700 BC, and it appears on maps until 887 AD.

Moreover, many ancient and early medieval texts mention Lechia. Even the classical first book of Poland, a chronicle written by a man known as Gall Anonim, mentioned the existence of this kingdom. These written resources seem to be reputable because 13 of 23 existing medieval chronicles of Poland discuss the Kingdom of Lechia.

For example, stories about Lechia appear in the resources by many famous writers like Wincenty Kadłubek (13th century), Jan Długosz (15th century), Karcin Kromer (16th century), and Benedykt Chmielowski (18th century). The oldest chronicle comes from the c. 4th – 8th century and was written by Wojnan.

The people who created the Kingdom of Lechia must have been very well trained warriors because their lands were unconquered – but not for the lack of trying by some strong armies. It is known that the Greeks, Persians, Romans, Byzantines, and Franks all tried to conquer the lands near the Vistula River. However, none of them were able to do it. Moreover, complex DNA tests made on the remains of ancient Slavic people proved that they dominated the area of the Kingdom of Lechia at least 7,000 years ago.

It is possible that the reasons behind this can be found in the end of the 18th and the 19th centuries, when Poland didn’t exist as an independent country. After the Partitions of Poland in 1772, 1793, and 1795, the territory of Poland was split between Germany, Russia, and Austria. While the Austrians didn’t try to influence the history of their new land, Germans and Russians wanted to destroy patriotism and the will of the Polish people to fight back. Therefore, they may have decided to do away with the information related to Pre-Christian times in Poland. 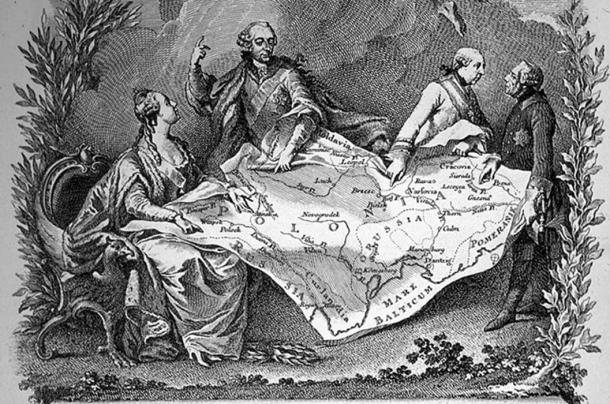 Allegory of the 1st partition of Poland, showing Catherine the Great of Russia (left), Joseph II of Austria and Frederick the Great of Prussia (right) quarrelling over their territories. ( Public Domain )

They could have hoped that Polish society would be easier to manipulate if the people believed that their only support must come from religion – because their nation “did not mean anything” before it. Of course, the countries wouldn’t have done this work in collaboration, but if they did plan it, their goal was successfully accomplished.

Unfortunately, most historians didn’t change try to change this belief in later years. However, an author who wrote books about the Kingdom of Lechia, Janusz Bieszk, did attempt to remind Polish people of their roots. Yet, his works were criticized by some old fashioned historians – suggesting that it may be a long time before these facts are finally accepted.

Lost Connections to the Kingdom

The Kingdom of Lechia had very good connections with other kingdoms. As mentioned, they were respected by the Roman Empire; but they also were acknowledged by the Scythians or the people of Anatolia. The people in the kingdom were called Lechici, and in Ottoman writings they appear as a tribe which lived on the land of ”Lechistan.”

Regrettably, countless artifacts related to the Kingdom of Lechia were replaced with newer constructions over the years. Many facts about the ancient kingdom still await rediscovery, but the impact of their politics on neighboring kingdoms is well known.

If historians would officially accept the existence of the Kingdom of Lechia, they would also have to agree that most of the pre-Christian sites in Poland probably belonged to these people. This would provide a new opening in research about the earliest history of Poland.

Are The Pre-Slavic Peoples The Pre-Indo-Europeans? [ENG]

” …..    More and more proofs indicate that indeed Pre-Slavic peoples and Pre-Indo-Europeans mean the same, and for sure Slavs-Scyths can be regarded as one of such peoples. And just think that when I was beginning to write Slavic Mythology, scientific experts could not believe that I was referring to the thesis of the origin of the Slavs and the Slavic ancient times from the areas of the Vistula River and not of their sudden birth from nonentity in the VI th century AD….”

Searching for answers to the questions about the ethnogenesis of the Slavs, we  need to take an interest in the issue of the Indo European community – who the Pre-Indo-Europeans (PIE)  were and where they lived.

So far, this problem has been the subject of speculations and countless disputes. Now, thanks to the new and crucial discoveries of geneticists, linguists, anthropologists and archaeologists we can attempt to get new, more accurate answers….”

This entry was posted on April 12, 2019 by HKW in Uncategorized and tagged Ancient Slavs, History, History and Mythology of the Slavs, Slavs, The Pre-Slavic Peoples.