Israel to Police European Coastlines: Protecting the Continent from Refugees? 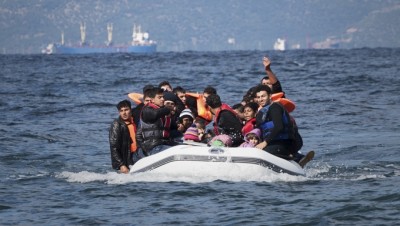 This sounds like a bad joke. It ain’t. Its real. One fascist government helps another fascist government. Yes, I have written about fascism invading the west before – warning that the European Union (non-union) is being gradually, but ever faster turned into a fascist dictatorship under the guise of democratic protection of ‘Democracy’; and this by her unelected European Commission (EC) leaders (sic).

EU citizens are being brainwashed with neoliberal lie-propaganda into believing that they are living in the heart of democracy – that they are free and protected by police and military, 24/7.

Indeed, such protection can be seen at almost every street corner in France’s major cities; France, the country that had the audacity to make the permanent state of emergency part of her Constitution. And others are dutifully following Macron’s example.

No wonder, EU member country governments have all been ‘put in place’ by fake elections, with the help of Cambridge Analytica and other social media tricks, by now well-known around the globe – and even the myriad MSM (mainstream media). It would be a strange coincidence, if practically all of the heads of EU states are following either neoliberal or neonazi doctrines. In any case, the difference are a few details. Most obvious neonazis are depicted with the denigrating term of populists, disregarding the fact that a populist is someone who is liked by the people. Wouldn’t that be democracy?

The PM of Hungary, Victor Orbàn, and Poland’s far-right Andrzej Duda, fall into this category and soon Italy’s government, basically led by the far right, deputy PM, Matteo Salvini, who calls the shots in Italy, to the detriment of the Five-Star lead party, will follow suit. Everybody who refuses to bend to Brussels’ rules is a ‘populist’. It’s that simple. And it’s no coincidence.

Back to the head-story: An Israeli private military contractor, Elbit Systems Ltd, has been awarded a contract by the so-called EU, to Monitor European shores, as reported by the Palestine Chronicle. Israel’s private defense contractor has “won” a 68 million dollars two-year contract, renewable by another two years, to survey the Mediterranean Sea and most of European coastlines and to report to Brussels and the countries’ authorities. Universal surveillance and fascism are on the march – and running ever faster.

This ‘bidding process’ was for sure not an open competition. This was ‘one fascist hand washing the hand of another fascist. Yes, that’s as bad as we have become in Europe. And the populace has no clue, because they are comfortably seeing their freedom, their civil rights, their human rights, being eroded, ‘floated’ away, under the pretext of national security – and of course their own, the people’s security. – That’s what a few ‘false flag’ terrorist attacks can achieve – people scream for help, for police protection. The more the better. And who is better suited than a fascist state to respond to that call of desperation – to fulfill that fake role of protector?

Israel is known for having armed the Ukraine government which is integrated by Neo-Nazis. Israel’s purpose of policing the European coastlines is to prevent Palestine Gaza prisoners from escaping their horrible, horrible fate. Two million Palestinians need to be forcefully kept locked into this open-air concentration camp, being tortured, bombed, starved and finally killed. That’s what Zionist-Israel is all about. Mind you, that is not at all an anti-Semitic statement. There are millions of Israelis who disagree with this fascist policy. But they are being shut-up, they have no right to speak out – plus they are, like Europeans, constantly drip-by-steady-drip indoctrinated by lies, falsehoods and deceptions – that Palestinians are a danger for the survival of Israel.

This is simply NOT TRUE. It is a flagrant lie – a lie sustained by the United States, whose interest is permanent conflict in the Middle East to control the Middle East’s rich resources – and Israel is an important ally – more than an ally. Thanks to Israel’s and AIPAC’s (American Israeli Public Affairs Committee, the strongest Washington lobby) endless flow of money to Washington’s politicians – Israel, as the paymaster of political campaigns of both parties of the US-One-Party system – calls the shots.

Israel Continues to Sow the Seeds of Discontent

By Israel, is meant Zionist-led Israel, not the common people who want nothing more than peace and a friendly and harmonious relationship with Palestine; Israelis who are aware that they are actually camping on Palestine land – Israelis, who have not been blinded by those who have since 70 years purposefully distorted history, altered schoolbooks and pretend that this Holy Land is theirs, rather than a piece of land of mutual ownership, to be shared equally and with equal rights.

These Israelis, the vast majority, are not targeted with this article, or with the accusation of being fascists. It’s their dictator leadership, those who are in lock-step with the neofascist Trump Administration – and, well, those who call the shots in Washington, in all the so-called thinktanks (sic) that make US foreign policy. Neoliberal, cum neonazi Israel wants to eradicate Palestine, Iran, Syria, but they are in bed with the murderous Saudis – with the killers of tens of thousands of Yemeni children, with the brutal murderers of the entire Yemeni population through famine, destruction of water supply and sanitation systems, of lack-of-hygiene induced cholera and a myriad of other diseases.

Israel’s private defense contractor announced having won this monstrous surveillance contract, with the EU Maritime Safety Agency. They will patrol the Mediterranean Sea and Europe’s coastlines with drones and inform Europe’s authorities of ‘irregularities’, of refugee ships, of last-hope vessels carrying desperate people, escaping from western created misery in their lands. And Palestinian refugees are on the rise. They can no longer stand their abject fate under Israeli’s inescapable rules governing the Gaza Extermination Camp. Yes, that’s what Gaza has become. They seek refuge in Europe, paradoxically, they go to their hangman seeking shelter. But where else to go?

So, these unmanned Israeli military aircraft will automatically signal the defense forces of Israel to intercept any attempt of escaping Palestinians – to bring them back to Gaza, to their open torture chamber, and – with for sure – further punishment to follow. – Gaza’s terror conditions have become the utter “normality” seen from the western populace, especially Europeans. They will just watch Palestinians being slaughtered into fear of escaping from their open-air prison, called Gaza. –

This past weekend’s latest Gaza military incursion, instigated by Israel’s War Minister, Avigdor Lieberman, a neonazi hawk of the worst kind, followed obviously by a Hamas response – which then triggered what was planned from the very beginning – Israeli batteries of rockets launched from Ashkelon and mass bombing of what’s left of the ruins called Gaza. – did you know that a large percentage of children in Gaza have amputated limbs? – What a future, even if peace was to break out one day.

All the while Netanyahu conveniently was celebrating the Hypocrisy of the Century – the end of WWI with a bunch of hypocrites like him, Netanyahu – except for Putin, whose attendance of this fake celebration and naval-gazing I don’t understand.

That’s what the west has become, or as renowned author and journalist Andre Vltchek, would say, they have colonized, enslaved and raped Asia, Africa and Latin America for at least a thousand years – why would you expect them to change? They have gotten away with murder for so long – why would they change?

Today, they continue with different, more sophisticated methods – its financial slavehood. It’s the epitome of shameless criminal neo-colonialism. The “two to four- year contract” of Israel’s defense contractor serves as a mere proxy for EU’s terror, inhumanity and lack of compassion. Mind you, the United States is just the heritage of Europeans migrated across the Atlantic.

The company, Elbit Systems Ltd, will provide European Union countries with maritime unmanned aircraft patrol services and in theory with nothing more -which is, of course, a flagrant lie. They will ex-contractually confiscate refugee boats, as miserably rickety as they may be, contributing to more refugee deaths. By September 2018, UNHCR, Mediterranean refugee transfers have been deadlier than ever this year, having reached more than 1,600 so far.

“Rocket News” reports, “in October, Israeli companies signed purchase agreements with the United Nations for the provision of water and security service to UN forces in Africa. Israel also “won” [quotes by author] a $777 million contract for the supply of India’s missile defenses, as well as [Israel] being revealed as a lead exporter of tools for spying on civilians being used by dictatorships or authoritarian governments around the world.”

“Such deals and multi-million-dollar contracts over a variety of regions are seen as not only a benefit to the Israeli economy but also [as proof for] the reliability of its [Israel’s] services and the subsequent potential increase of its international credibility.”

According to the Western media, whatever Zionist-Israel does, the Chosen People, it’s for the good of Mother Earth. How long will it take until the populace inhabiting Mother Earth wakes up, screaming for fear and agony, bringing an end to this farce.

Note to readers: please click the share buttons above. Forward this article to your email lists. Crosspost on your blog site, internet forums. etc.

Peter Koenig is an economist and geopolitical analyst. He is also a water resources and environmental specialist. He worked for over 30 years with the World Bank and the World Health Organization around the world in the fields of environment and water. He lectures at universities in the US, Europe and South America. He writes regularly for Global Research; ICH; RT; Sputnik; PressTV; The 21st Century; TeleSUR; The Vineyard of The Saker Blog, the New Eastern Outlook (NEO); and other internet sites. He is the author of Implosion – An Economic Thriller about War, Environmental Destruction and Corporate Greed – fiction based on facts and on 30 years of World Bank experience around the globe. He is also a co-author of The World Order and Revolution! – Essays from the Resistance.

Featured image is from Armada International

This entry was posted on November 25, 2018 by HKW in Uncategorized and tagged EU Maritime Safety Agency, European Union, fascist government, Israel, Israel to Police European Coastlines, The surveillance of Europeans.