Just as our bodies need food, our souls also have needs, for meaning

and inspiring models of truth, courage, goodness, beauty, and love.

humanity as soulless animals, better to exploit and cull us.

To confirm this, just look at contemporary music, literature or films. It’s what you’d expect in a society run by a satanic cult, where mention of God is forbidden because atheists might be offended. Where believers have no rights?

(The attack is also intellectual. They suppress information and control discourse.)

Modern “culture” is a product of the Luciferian conspiracy against Christian Civilization.

Relentlessly negative and increasingly obscene, modern “culture” attacks the sources of dignity, decency, and hope that define us as human beings rather than animals. 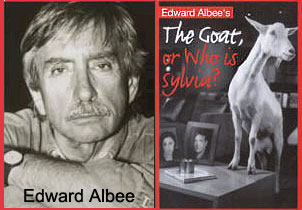 For example last week the media in London was hyping a play about “sexual love” between a married man and a goat.

In an interview, the playwright Edward Albee said “The Goat” challenged this “societal taboo” and hoped that members of the audience would “re-examine their values and attitudes toward bestiality.”

“Funny, moving and tragic,” raved Channel 4 News, a respected and “serious” programme in the UK.

Bestiality has occurred and the play is primarily concerned with the protagonist’s
confession and inability to deal with the fact that he “feels guilty for not feeling guilty”. “We are all animals,” he rationalizes. The play deals with the confrontation between the protagonist, his wife and their gay son.

A reader, Jonathan Stonehouse wrote: “It staggers me to think that there are many who now associate freedom with the normalization of everything formerly regarded as morally repugnant, when the truth is we’re building a world in which the majority will be slaves to every whim and fancy, not to mention dark and abhorrent desire, the human imagination can conceive. That’s a form of ‘freedom’ I can well do without.”

True culture is based on refining our animal instincts in terms of spiritual ideals (like truth, justice, goodness and beauty.) Modern anti-culture is based on demoralizing and destroying society by disparaging these ideals and indulging our basest impulses.

Anti-culture portrays man in purely naturalistic and material terms. Every sexual impulse and bodily function must be recognized and indulged. This is considered “courageous” while any demur is considered repressive, prudish or fascist.

In one of the final episodes of “Sex and the City“, the audience had to endure Carrie getting a bikini wax. Thankfully we were spared a full frontal view. This is not prudishness. Human dignity requires privacy. Female allure requires modesty and mystery. We have souls, not only bodies.

The exaltation of man’s animal nature, at the expense of his spiritual qualities, is a direct consequence of the deification of man. Our anti-culture assumes that man is a finished product and doesn’t need to be transformed by God’s Love.

Modern “culture” reflects the final unfolding of a diabolical conspiracy that rejects the Designer’s instructions. 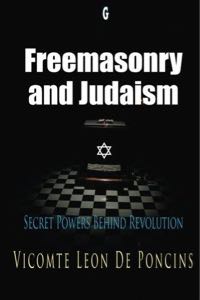 By eating the forbidden fruit, Lucifer promised: “Your eyes will be open and you will be like God, knowing good and evil.” (Genesis 3:5) This means that man will redefine what is good and evil to suit his self-interest.

God is Good. When man makes himself God, good becomes whatever the most powerful man or group wants. Good becomes evil and evil becomes good. This is happening today.

There were a lot of groups who wanted to be God but some conservatives believe our anti-culture can be traced to the Jewish view of their “chosen-ness.”

Originally Jews had a conception of God as a Universal Moral Force. (This is the Judaism I identify with.) Apparently, in 79 BC there was a Civil War and the Pharisees were victorious. They proclaimed the supremacy of the Babylonian Talmud over the Torah (the first five books of the Old Testament.)

The Talmud teaches that the Jews are chosen by God to lead mankind. In practice, this makes them God and gives them the right to redefine reality. It has made them Luciferians.

In the words of Harold Rosenthal, “Most Jews do not like to admit it, but our god is Lucifer…and we are his chosen people. Lucifer is very much alive.”

According to the author “Rabi”: “Christianity is essentially preoccupied with the individual salvation of man. Judaism only contemplates the salvation of the House of Israel, which alone can permit the salvation of seventy nations of the universe.” (Anatomie du Judasime Francaise, pp.203-204)

Thus the Pharisees rejected Christ because he taught that God is Love and all men are equal in the sight of God.

“The advent of Christ was a national catastrophe for the Jewish people, especially for the leaders,” Leon de Poncins writes. “Until then they alone had been the Sons of the Covenant; they had been its sole high priests and beneficiaries… ”

He continues: “The irreducible antagonism with which Judaism has opposed Christianity for 2000 years is the key and mainspring of modern subversion…[The Jew] championed reason against the mythical world of the spirit …he was the doctor of unbelief; all those who were mentally in revolt came to him either secretly or in broad daylight…” (Judaism and the Vatican, pp.111-113.)
FREEMASONRY AND JUDAISM

I suspect that the Messianism of the Pharisee Jews may be an instrument of international bankers, a way to consolidate their power. These bankers and their allies are creating a New World Order that cares little for democratic principles. They will be the Gods.

Nathan Rothschild (1777-1836) said: “I care not what puppet is placed on the throne of England to rule the Empire. The man who controls Britain’s money supply controls the British Empire and I control the British money supply.”

In addition to Jewish Messianism, Freemasonry has been the bankers’ tool. It was instrumental in the destruction of the Christian monarchies in Germany, Austria and Russia and the decline of the Catholic Church.

This is also the view revealed in The Red Symphony.

In his Encyclical Humanum Genus (1884) Pope Leo XIII wrote that the ultimate aim of Freemasonry is “to uproot completely the whole religious and moral order of the world, which has been brought into existence by Christianity…This will mean that the foundation and the laws of the new structure of society will be drawn from pure naturalism.”

Again Pope Leo XIII said: “Freemasonry is the permanent personification of the Revolution; it constitutes a sort of society in reverse whose aim is to exercise an occult overlordship upon society as we know it, and whose sole raison d’etre consists of waging war against God and his Church.” (De Poncins, Freemasonry and the Vatican, p. 45) 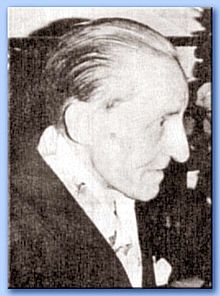 In Freemasonry and the Vatican, Leon de Poncins, left, uses Jewish sources to argue that Freemasonry is closely related to Judaism. For example, Rabbi Elle Benamozegh wrote: “Masonic theology corresponds well enough to that of the Kabbala.,,,(Israel et L’Humanite, p.73)

De Poncins cites an article that appeared in 1861 in a Parisian Jewish Review La Verite Israelite: “But the spirit of Freemasonry is that of Judaism in its most fundamental beliefs; its ideas are Judaic, its language is Judaic, its very organization, almost, is Judaic… ”

De Poncins writes that the goal of both Freemasonry and Judaism is the unification of the world under Jewish law. (Freemasonry and the Vatican, p. 76)

Judeo Masonic culture hasn’t been all bad. It has allowed us to accept our sexual desires without guilt and given us the freedom to find God again on our own terms. However, these benefits are temporary enticements. The ultimate aim is to divorce us from God and enslave us to our sexual and material lusts, i.e. to arrest our development.

Mankind is being subverted by its political and cultural leaders, beholden to international bankers and their allies, who often are practicing Luciferians. They use Judaism (incl. Zionism) and Freemasonry as instruments of organization and control. Obviously, the majority of Jews and Freemasons are unaware or do not believe this.

Modern culture makes a God of man. Man defines everything including goodness and truth. The result is that we are in a spiritual prison cut off from God and oppressed by relentless reminders of our own stunted development.

I’m afraid spiritual and psychological enslavement is but a prelude to a political and economic one. Since 9-11, we are sheep grazing in sight of an abattoir.

—Related– Why is Modern Art So Bad?