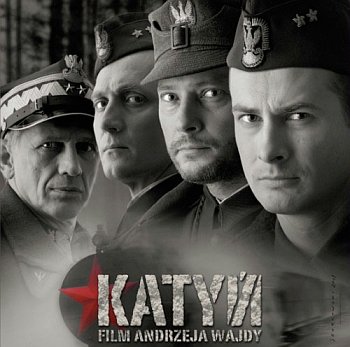 (left, the Poles finally told their story in 2007)
Communist Jews executed 20,000 Polish Catholic army officers in 1940.
Why has Hollywood ignored this incredible story?
With six degrees of separation, Hollywood, (and indeed America) is ultimately run by the spiritual descendants of the Katyn murderers.
The same applies to Russia who again murdered 97 members of the Polish elite, who came to Smolensk in 2010 to mourn the Katyn massacre.
That’s why the Allies covered it up during the war and continues to suppress it today.
The Zaitzev Diary describes the Christian character of the Polish officers resistance to Communist indoctrination.
(From 2009)
by Henry Makow Ph.D.

“Defiance”, yet another movie about Jewish victimhood and heroism opened in 1800 US theatres in 2009.

and recently, The ZooKeeper’s Wife.

But one incredible Jewish story of genocide continues to elude Hollywood. This is the execution of 20,000 Polish  Officer POW’s, (devout Roman Catholics who represented much of the Polish elite) by the Bolshevik Jewish-led NKVD in the Katyn forest in 1940.

Why has Hollywood ignored this story? My opinion is that, with six degrees of separation, Hollywood, (and indeed America) is ultimately run by the spiritual descendants of these murderers.

Thus we are brainwashed to ignore genocides that don’t fit the Nazi-Jew paradigm. Movies are essential to this programming. Part of an ongoing psychological war on the Christian European majority, we are made to identify with minorities. If we object, we are counted as Nazis.

Andrej Wajda, 82, Poland’s most celebrated film director, lost his father at Katyn. In 2007, Wajda made a movie about this genocide and its effect on the victims’ families. Financed by Polish TV, the film, “Katyn,” was a major artistic and commercial success in Poland. It was nominated for an Oscar for Best Foreign Film in 2008, and has not found wide distribution outside Poland.

It didn’t win the Oscar. The award went to a Jewish Holocaust movie, “The Counterfeiters,” a “true story” from Germany. It described the moral dilemma faced by a Jewish master-counterfeiter forced to forge British and US currency. (“Should I sabotage this process?”) I saw this movie. It is an enjoyable piece of propaganda which helps the audience identify with Jews. In real life, I doubt if the hero had any such moral qualms. Even in the film, he filled his own pockets.

Here is the trailer for “Katyn”. I haven’t seen the movie but I did stumble across information that illustrates why this is the stuff of which epics are made.

First, some background from Wikipedia: “Since Poland’s conscription system required every nonexempt university graduate to become a reserve officer, the Soviets were able to round up much of the Polish intelligentsia. Those who died at Katyn included an admiral, two generals, 24 colonels, 79 lieutenant colonels, 258 majors, 654 captains, 17 naval captains, 3,420 NCOs, seven chaplains, three landowners, a prince, 43 officials, 85 privates, and 131 refugees. Also among the dead were 20 university professors; 300 physicians; several hundred lawyers, engineers, and teachers; and more than 100 writers and journalists as well as about 200 pilots. In all, the NKVD executed almost half the Polish officer corps.” 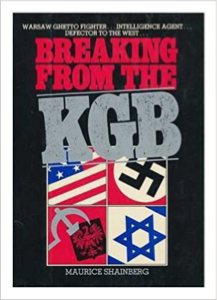 In 1945, Maurice Shainberg was the Assistant to KGB Col. Grigory Zaitzev who was the Commandant of the main Katyn work camp. In his book, “Breaking from the KGB,” (1986) Shainberg, a Polish Jew, tells how he discovered Zaitzev’s Katyn diary in the safe. Shainberg had misgivings about Communism and identified with his fellow Poles. He took great personal risks to copy sections of the diary. The Zaitzev Diary was dynamite because the Soviets always claimed the Nazis had committed the war crime.

The diary appears authentic except for one major discrepancy. Zaitzev pretends the slaughter was necessitated by lack of transport to remove the prisoners in advance of the Nazi onslaught in June 1941. In fact, Stalin and Beria gave the order to murder the Poles in early March and the executions took place in April and May 1940. Only 4250 were actually shot in Katyn forest. The remainder were executed in prisons elsewhere. Many were taken out in barges on the White Sea and drowned.

Otherwise, the diary describes how the Soviets tried to indoctrinate and intimidate the Poles into betraying their culture and their country (as the Western-elite has done today), by forming a puppet class in a future Soviet-dominated Poland. The Poles refused and that is the reason they were slaughtered.

When Zaitzev got his assignment, he was warned that the Poles were all “educated religious fanatics” always singing patriotic songs and hymns with their chaplain. Zaitzev was confident he could teach them to “pray to a new God.”

The prisoners worked cutting trees from 6 a.m. to 6 p.m. In the evening they boycotted the indoctrination sessions. They had no desire to assist in building future Soviet Poland.

One officer explained: “As a Pole I know my nation. None of us have the desire to dictate to other people, and we don’t want other people to dictate to us. We are neither a Fascist or a Communist nation, but a devoutly Catholic one.”

Once during a speech, the Polish Army Chaplain Jozwiak lifted up the crucifix he wore and began to chant a prayer. The prisoners followed suit. That night, Jozwiak was taken to the Interrogation Chamber.

“The use of electrical currents on Father Jozwiak’s eyes and body didn’t help. Nor was the Chinese method successful, where the prisoner was stripped from the waist down and forced to sit over an open cage of starving rats. We couldn’t allow the priest to go back to the other prisoners in the condition he was left in, so we finished him off.” (Shainberg, p. 165)

The NKVD thought the priest’s example would have a sobering effect on the POW’s but instead they curtailed their work. The NKVD retaliated by decreasing rations which made the prisoners too weak to work. When the NKVD started shooting prisoners who didn’t work; the others turned on the guards with their axes and 192 Poles were shot.

Now the Poles were more defiant than ever. When a collaborator lectured to them, they began to chant a prayer: “We Polish soldiers and prisoners of the Soviets have been brought here to foreign lands to die. We beg of you, Mother of God, to take care of our nation…Save us from German and Soviet imprisonment. We are offering ourselves as a sacrifice for the independence of our fatherland…”

Of course this is the kind of self sacrifice and patriotism that our Masters don’t want us to see.

“Our task was impossible,” Zaitzev wrote. “People who have never met these Poles will not understand how difficult it was to change their attitude toward us. No beating or abuse would make them stop their singing. They are a hard and proud people. Every day they get physically weaker but their anger and hatred increased.”

Polish historian Krzystztof Siwek tells me that Poland has declared April 13 a National Day of Remembrance of the Katyn martyrs. “A joint Polish-Russian commission was formed to develop an official position of both sides. Most of controversies remain unresolved. Russians fear that admitting fully to the crime against humanity would allow the victims’ families to demand compensations and other penalties as in the case of Germany.”

The goal of  Illuminati Jewish bankers and their Masonic gentile collaborators is to meld the world’s population into a single servant class in a “New World Order.”  This requires the destruction of the four legs of human identity: race, religion, nation and family.

The Illuminati bankers established the USSR as a precursor to the New World Order. The execution of the Polish elite was necessary to the longterm plan. The Nazis, also an Illuminati Jewish creation, treated Polish and other national elites in a similar fashion.

The Illuminati are Luciferian. They wish to substitute their rule for God’s natural and spiritual (moral) order. They need to destroy the Western European Christian heterosexual middle class to fulfill their agenda.  Culture is a function of money and the Illuminati control credit. Thus our culture maintains a conspiracy of silence about the gradual subversion of Western Civilization by its own traitorous elite.

Instead the focus, in movies for e.g., is on minorities. Clint Eastwood’s “Gran Torino” is about a redneck who learns to love Asian immigrants’ kids. Oscar nominated “Slumdog Millionaire” is about Bombay street kids. Sean Penn’s “Milk” is about a crusader for homosexual rights. Oscar nominated “The Reader” combines pedophilia and German guilt for the Holocaust. “Revolutionary Road” presents a negative view of marriage and the 1950’s, a period when the nuclear family recovered. (I liked this movie, but not the message.) “Doubt” is about homosexuality in the Catholic Church. French Best Foreign Language nominee “The Class” is about immigrant youths and how lovable they are. And on it goes, movies are propaganda for the Illuminati agenda.

When the movie is about white Americans, as in “Benjamin Button,” no collective identity can be upheld, no universals revealed. Life must be literally turned upside down, in this case reversed from old to young, before it has any interest for the screenwriter, Eric Roth. This diverting but ultimately vacuous movie is a triumph of make-up. It has nothing important to say to Americans at this critical moment.

So there should be no surprise that a film about Christian martyrs and patriots coming from an anachronism called a nation like Poland will be quietly swept under the carpet by Hollywood.

Heaven forbid that the sheep figure out that the same fate may await them.