The Fraudulent Khazar Claim to Palestine

The Khazars bought the “Jewish” franchise in the 8th Century.
They needed to distinguish themselves from their neighbors who were
Christians and Muslims.
As John Beaty shows in his book, Iron Curtain over America, the NWO is very much a recrudescence of the old Khazar empire, extended to the whole planet. The Bolshevik Revolution was revenge for the destruction of the Khazar Empire in the 10th century by the Kievan Rus.
Even Israeli geneticists and historians say the Palestinians are the true descendants of the Biblical Hebrews and Ashkenazi Jews are Khazars.
Study: ‘European Jews are not Semite’
A 2012 genetic study published in the British journal Genome Biology and Evolution claims that European Jews (Ashkenazi) don’t belong to the 12 (Semite) tribes of Israel. They’re a mix of genetic ancestries, far more of which than previously thought to originate in tribes from the Caucasus – a region that sits between Eastern Europe and Asia Minor. Ashkenazi ancestry comes from Slav, Bulgar, Iranian and Turkic tribes which established the Khazar empire in that region – which at its peak stretched from Kiev in the West to the Aral Sea in the Southeast. 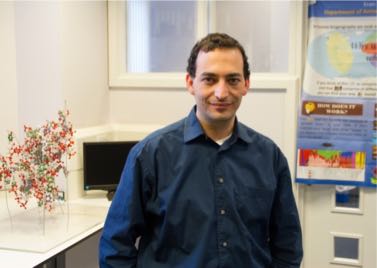 The study, titled ‘The Missing Link of Jewish European Ancestry: Contrasting the Rhineland and the Khazarian Hypotheses’, was conducted by Dr. Eran Elhaik, an Israeli-American geneticist at the Johns Hopkins School of Public Health in Baltimore, Maryland.
Elhaik compared the genomes of 1,287 unrelated individuals who hail from eight Jewish and 74 non-Jewish populations.
Among the European Jews, Elhaik found ancestral signatures that pointed clearly to the Caucasus and also, but to a smaller degree, the Middle East, where the Israelite (Hebrew tribes) had originated. More than 90% of 12.7 million world Jewish population is Ashkenazi.
RHINELAND HYPOTHESIS
The so-called “Rhineland hypothesis” is based on Zionists’ lie that Jews migrated to Europe when Arab Muslims captured the city of Jerusalem in 638 CE. This lie has been debunked by British academic, Dr. Karen Armstrong, former Catholic Nun, author, historian and a religious authority on Judeo-Christianity, in an article published by Time Magazine (April 16, 2001).
“When Caliph Umar, one of Muhammad’s successors, conquered the Jerusalem of the Christian Byzantines in 638, he insisted that the three faiths of Abraham coexist. He refused to pray in the Church of the Holy Sepulcher when he was escorted around the city by the Greek Orthodox Patriarch. Had he done so, he explained, the Muslims would have wanted to build a mosque there to commemorate the first Islamic prayer in Jerusalem. The Jews found their new Muslim rulers far more congenial than the Byzantines. The Christians had never allowed the Jews to reside permanently in the city, whereas Umar invited 70 Jewish families back.
The Byzantines had left the Jewish Temple in ruins and had even begun to use the Temple Mount as a garbage dump. Umar, according to a variety of accounts, was horrified to see this desecration. He helped clear it with his own hands, reconsecrated the platform and built a simple wooden mosque on the southern end, site of al-Aqsa Mosque today. Jerusalem’s Dome of the Rock, built by Caliph Abd al-Malik in 691, was the first great building to be constructed in the Islamic world. It symbolizes the ascent that all Muslims must make to God, whose perfection and eternity are represented by the circle of the great golden dome. Other Islamic shrines on the Temple Mount, which Muslims call al-Haram al-Sharif, the Most Noble Sanctuary, were devoted to David, Solomon and Jesus,” she wrote.
Furthermore, when Muslim-Arab army invaded Christian Spain in 711 CE, the local Jewish community which was treated as Serf (slaves), welcomed Muslims as their liberators. American journalist and author, Rose Wilder Lane wrote that within fifty years of Muslim rule, the Serf Jews became part of the middle and upper-class. Some of them even joined the royal court and commanders in army later.
“When Granda fell, the Saracen (Muslim) troops retreated to Africa, and on their heels came Isabella’s and Ferdinand’s troops, driving out hundreds of thousands of Jews. There would be no more religious freedom in Spain,” wrote Lane. According to some Arab and European historians, between 3-5 million Muslims were slaughtered by the Crusaders within 1492-1550.
The conversion of Khazarian to Jewish religion began in the 8th century. It was lead by the empire’s wealthy merchants. Some Jews from Mesopotamia and the dying Christian Byzantium empire also immigrated to Khazar empire.
“We conclude that the genome of European Jews is a tapestry of ancient populations including Judaised Khazars, Greco-Roman Jews, Mesopotamian Jews, and Judeans. Their population structure was formed in the Caucasus and the banks of the Volga, with roots stretching to Canaan and the banks of the Jordan,” Elhaik claims.
Dr. Elhaik has also claimed that the Yiddish language had nothing to do with Jewish religion. He asserts Yiddish began as Slavic language which was classified as a dialect of high German later.
———
Related– Benjamin Freedman – The Truth about the Khazars
Makow – Jews neither race, religion or nation but occult secret society
———– DO JEWS SUFFER FROM FALSE CONSCIOUSNESS?
Jews Not Related to Biblical Hebrews, Originated in South Russia! Israeli Scientists Proved that Modern Jews’ “Y Chromosome” Related to Kurds, Asiatic People NOT Semitic
People!
================
https://www.henrymakow.com/2018/09/fraudulent-khazar-claim.html

12 comments on “The Fraudulent Khazar Claim to Palestine”