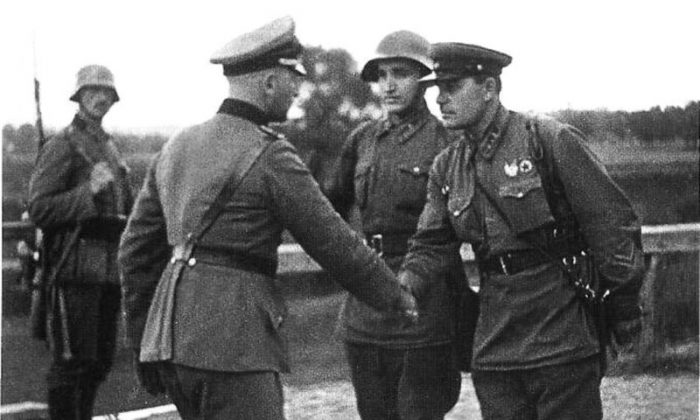 A German and a Soviet officer shaking hands at the end of the Invasion of Poland. The Nazi and communist regimes divided the country in two and visited great suffering upon the inhabitants. ( Unknown war correspondent/TASS/Public Domain)

The USSR invaded Poland on the east on September 17, 1939. On September 22, Germans and Soviets were in the Polish town Brześć Litewski (today Brest-Litovsk, in Belarus). The commander of the German forces was General Heinz Guderian, then to the control of the XIX Corps of Armies. He had been the one who had conquered Brest after a hard resistance of the Polish garrison that defended the castle of that city. The Soviet column was headed by Russian General Semyon Krivoshein, at the head of his 29th Light Tank Brigade. After the meeting, Krivoshein invited Guderian and the other German commanders to his tent, where they toasted his victory over Poland.

Speaking fluently in French, the Soviet general apologized to the German commanders for not having invited any ladies to the event, and invited them to visit Moscow after what he wished for a quick victory over capitalist England (a victory that was not possible, largely thanks to Polish pilots who came to Britain and joined the RAF in defending the island during the Battle of Britain).

That same day, Germans and Soviets made a joint parade in Brest to celebrate their victory.

This parallelism between Nazis and Soviets is constant throughout the film, but there are especially striking moments, as when we see them salute and joke with each other. There is even a sequence, historically unlikely but very effective in a film, in which one of the German officers calls his Soviet interlocutor amicably ‘comrade’.“

The author of these words is Pablo Iglesias Turrión, former militant of the Young Communists and current leader of Podemos. As it turns out that from that scene that he thinks “unlikely” not only there are photos, but also recorded on film:

In April 1945, the Third Reich was on its last legs. Triumphant armies from multiple countries were advancing on German soil from all directions. Among the proudest were none other than the troops of the Soviet Union as they captured Adolf Hitler’s lair, Berlin.

Nearly four years earlier, in 1941, the Führer had launched an invasion of the USSR in an attempt to exterminate its people and plunder its territory. Twenty-six million Russians and victims of other Soviet ethnicities did not survive.

But beyond the sheer human cost of what many former Soviet states now remember as the Great Patriotic War, a less-than-heroic story provides sobering context for the most brutal military campaign of World War II.

This epic of national survival celebrated in Russia and other countries every May 9 overshadows—but does not erase—a base exercise in communist aggression, atrocity, and betrayal.

In the years immediately preceding the war, Hitler’s coercive diplomacy had absorbed Austria into the Nazi Reich and split Czechoslovakia into a Nazi-controlled Czech protectorate and a fascist Slovak puppet state. Poland was next, and Soviet dictator Josef Stalin had agreed to take part.

The USSR not only joined the German invasion of Poland but also supplied the Reich with crucial shipments of vital petroleum and other materials as Nazi tanks swept through the Low Countries and France—and as Wehrmacht divisions occupied the Balkans and North Africa.

Much of Hitler’s initial success was Stalin’s own doing.

By the time of the Nazi invasion of the Soviet Union on June 22, 1941, the Soviet secret police had been hard at work persecuting the millions of people living in its new territories. In particular, hundreds of thousands of Poles—mainly military personnel, clergymen, and public administrators—were murdered by the Soviet regime, adding to the millions of Poles who died in the war.

In 1941, the Soviet Union was compelled to cooperate with the Allied powers after the Nazi empire it had mistakenly aided revealed its true colors. With generous resources from the West, the Red Army not only bore the brunt of fighting against the German military, but proved capable of mounting the massive tank campaigns that propelled it to Berlin—and allowed Stalin to subjugate the peoples of Eastern Europe under their own Soviet-style regimes.

Aside from hundreds of thousands of individuals killed for political reasons, millions of common people, from Germany to Korea, found themselves raped, robbed, deported, or murdered by the communist “liberators.”

The Soviet people themselves suffered dearly as a direct result of, first, their rulers’ opportunism, and then the senselessly brutal measures with which the Communist Party and Red Army drove them to a bittersweet victory.

Much of Hitler’s initial success was Stalin’s own doing. Starting in 1937, the Soviet Red Army was crippled by a mass purge of higher officers whom Stalin suspected of being disloyal. Dozens of generals, including those working on advanced variations of the German blitzkrieg strategy, were tortured and shot. Others, such as the famed Marshal Gregory Zhukov, were made to serve minor roles while Stalin’s yes-men filled the top positions.

This created a nightmare for Soviet armies stationed in dense formation at the border in 1941—and the tens of millions of civilians in Hitler’s path. The Wehrmacht cut through the poorly led and unprepared Red Army with ease; German troops took several million prisoners in the opening weeks of the war. The vast majority ended up in Nazi death camps, where they were worked to death or shot by the thousands. After Jews, Soviet prisoners make up the second biggest group of Holocaust victims.

Nazi brutality was matched and sometimes surpassed by the callous disregard Soviet commanders had for their own men. Instead of making strategic retreats to conserve manpower, Stalin and his officers gave the infamous Order 227—a short decree that forbade retreat even to avoid encirclement.

“Ni shagu nazad”—Russian for “not one step back”—is often romantically seen as a testament to the dictator’s will to resist the enemy, but is better remembered as Stalin’s refusal to accept the reality of the war. The order led to the senseless slaughter of countless Russians.

Entire secret police divisions—complete with their own tanks and artillery—were set aside not to fight the Germans, but to attack and destroy Soviet formations that retreated under Nazi fire.

Soviet leaders regarded those captured by the Germans as traitors. Those who had the misfortune of somehow making it back to Soviet territory found themselves put on trial and pressed into service with penal battalions—the so-called Soviet strafbattalion modeled on the Nazi concept of the same name.

Officers and men who formed these battalions received substandard equipment and no reinforcements, and were used for suicide missions. In an extreme example recounted by a Soviet defector in the Cold War, men were made to act as machine-gunners in the rear position of combat aircraft—they were chained to their weapons and had no parachutes. Others were deployed en masse to run across minefields to clear them for following armies.

The Consequences of ‘Liberation’

Much has been made of Stalin’s cooperation with the Nazi menace, though the full picture might only be gleaned once the Kremlin archives are fully declassified.

A common interpretation of events tells us the Soviet dictator was unimpressed with the West’s indecision in the face of Hitler’s pre-war aggression and saw little gain in taking a stand without support from the democracies. Scholars of military history generally agree that the Red Army was severely weakened by communist purges, and was unprepared to wage war when it came.

Other research suggests that were it not for the unfortunate timing of the Nazi invasion, the Red Army would have rapidly completed important military reforms and introduced new weapons.

Proponents of this view, particularly post-Soviet scholars in Russia, submit that existing Soviet doctrine called for an all-out invasion of Europe at a time of Stalin’s choosing—and that it was for this end, not simple defense, that he extended an olive branch to Berlin.

Regardless of what the Soviet leadership hoped to achieve with pro-Nazi diplomacy, the myth of the USSR as an ally of freedom at any point in World War II is ill-founded. One need look no further than the post-war fates of Eastern Europe and Northern Asia.

Siege of Changchun: Memories From a Communist Famine

Marauding Soviet troops, initially welcomed as liberators, were allowed and sometimes encouraged by their commanders to loot their host nations and gained an unexaggerated reputation as prolific rapists. Meanwhile, millions of Soviet soldiers and civilians—1.5 million of them repatriated by British authorities—became fresh fodder for the labor camps as Stalin continued his prewar despotism.

But the most deleterious and persisting consequence of Soviet “liberation,” both in the East and West, was political. Stalinist regimes, imposed by Moscow, shackled the fledgling nation-states of Eastern Europe for over 40 years. In Asia, the Soviet lightning offensive against Imperial Japanese colonies in China and Korea directly contributed to the unlikely triumph of the local communists.

Over 70 years and hundreds of millions of victims later, these regimes are still in power.

Communism is estimated to have killed at least 100 million people, yet its crimes have not been fully compiled and its ideology still persists. The Epoch Times seeks to expose the history and beliefs of this movement, which has been a source of tyranny and destruction since it emerged. Read the whole series at ept.ms/TheDeadEndCom

Views expressed in this article are the opinions of the author and do not necessarily reflect the views of The Epoch Times.

6 comments on “Darkness of Victory”

This entry was posted on September 17, 2018 by HKW in Uncategorized and tagged 17/09/1939, Communism, Darkness of Victory, German and a Soviet alliance, History, USSR, WW2.