A Polish NSZ Guerrilla Brigade Fights the Germans, Traverses Czechoslovakia, and Frees Women About to Be Burned Alive 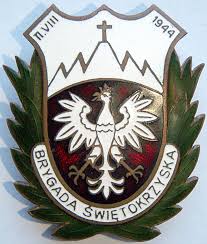 on January 13, 2018
Format: Hardcover
THE HOLY CROSS BRIGADE OF THE NSZ IN PHOTOGRAPHS AND DOCUMENTS is the title of this Polish-language book. It is a significant expansion of the 2014 edition.

The first 16 pages are a description of the NSZ and the BRYGADA SWIETOKRZYSKA, and are written by author and historian Leszek Zebrowski. He tells the history of these guerrilla movements, and includes interesting information. For instance, the Polish soldiers in Zygmunt Berling’s Army, instead of giving arms, ammunition, and food to the Communist GL-AL units, gave them to the Brigade instead. (p. 7).

The Brigade eventually met up with General Patton’s forces, and this prevented the soldiers of the Brigade from being handed over to the Soviet Union for certain death. The meeting featured cordiality, and two flags side-by-side—Polish and American. (pp. 10-11). The British government was opposed to the Brigade being integrated into General Anders’ Second Corps. (p. 11). London was not interested in an enlarged Polish Army in the West.

The USSR began a campaign of vicious slander against the Brigade, making vile accusations of the NSZ fighting for the Nazis. No sooner had the Third Reich been defeated than the Soviets demanded the extradition of the Brigade as “Nazi collaborators”. Communist agents subsequently made assassination attempts against the leaders of the Brigade in the west, and unsuccessfully framed the Brigade in a French court.

After the defeat of the Third Reich, the Brigade, for the first few postwar years, served as part of the Allied occupation force. Its members subsequently scattered worldwide, primarily to the USA and Canada, but also to South America and Australia.

Communist propaganda about the NSZ did not cease with the fall of Communism in 1989 Poland. (It lives on in many Jewish publications to this day). In 1991, a commentator Chlebowski, who had visited the elderly Brigade Commander, Antoni Szacki “Bohun”, soon repeated the totally-false charge that the Brigade fought together with the Germans. Evidently, for some, the lie was just too good to give up. “Bohun” invited Chlebowski to search the German archives for the real answer to the question why the Germans did not wipe the Brigade out during its traverse behind German lines through Czechoslovakia.

The remainder of this work consists of a collection of many photographs and documents from the NSZ in general and the Brigade in particular. The documents are featured in approximately chronological order. Some of the photos are from Poland, while others were made while the Brigade was in Czechoslovakia. Many of the photos show the Brigade on the march or engaged in combat training.

Most of the documents and photos deal with personnel in the ranks of the NSZ. For instance, one of them was a member of the Staff of the Brigade—Stefan Marcinkowski “Poraj”. One photo of him shows him in a boat, in Czechoslovakia, in the spring of 1945. [I knew Stefan Marcinkowski from my childhood, and we eventually had endless discussions about WWII.]

Only a few of the documents deal with immediate combat-related events. One of them (dated September 5, 1944) describes an NSZ attack which destroyed a 15-man SS unit near Bieliny, at a cost of 2 Polish guerrillas killed and five seriously wounded.

A few of the documents consist of bulletins put out by the NSZ. A couple of these focus on the recently-concluded Soviet-betrayed Warsaw Uprising, the needless shedding of Polish blood for someone else’s benefit (there, and elsewhere), and the loss of the capital city and its irreplaceable treasures. They also reaffirm the Soviet Union as an enemy of Poland—in fact, a worse enemy than Germany.

An NSZ bulletin (Order Number 205), dated December 15, 1944, warns Poles against any form of cooperation with the German Army, even if this cooperation is “voluntary”. (This soundly refutes the insinuations, by Communists and certain Jews, that the NSZ advocated some form of collaboration with the Nazis.)

Another NSZ bulletin, from December 1944, summarizes the situation facing Poland. With the Germans having been driven out, it stressed the “uncompromising fight against the Red invader, and the defense, to the very last breath, of the Polish cities of Wilno [now Vilnius] and Lwow [now Lviv].”

The most interesting part of this book, in my opinion, is the material dealing with the liberation of the Nazi concentration camp at Holysov (Holyszow) in German-occupied Czechoslovakia in 1945, by the westward-marching BRYGADA SWIETOKRZYSKA. (The Nazi camp was a subcamp of the Flossenburg concentration camp system.) The Germans had set up barrels of petrol surrounding the wooden huts, intending to set fire to them upon the approach of the advancing Allied Armies, and thus ending the lives of the inmates with horrible deaths.

Thousands of women were freed by the Brigade, and some of the photos in this book show them after their liberation. One photo shows the signatures of some of the women. Another one shows the heart-shaped artwork that the women made to express their gratitude to the Brigade.

Finally, there is a photograph that shows the jubilant Brigade meeting up with the American Army in prostrate Germany.