The left’s new target is Poland & Polish Americans. Here is why. 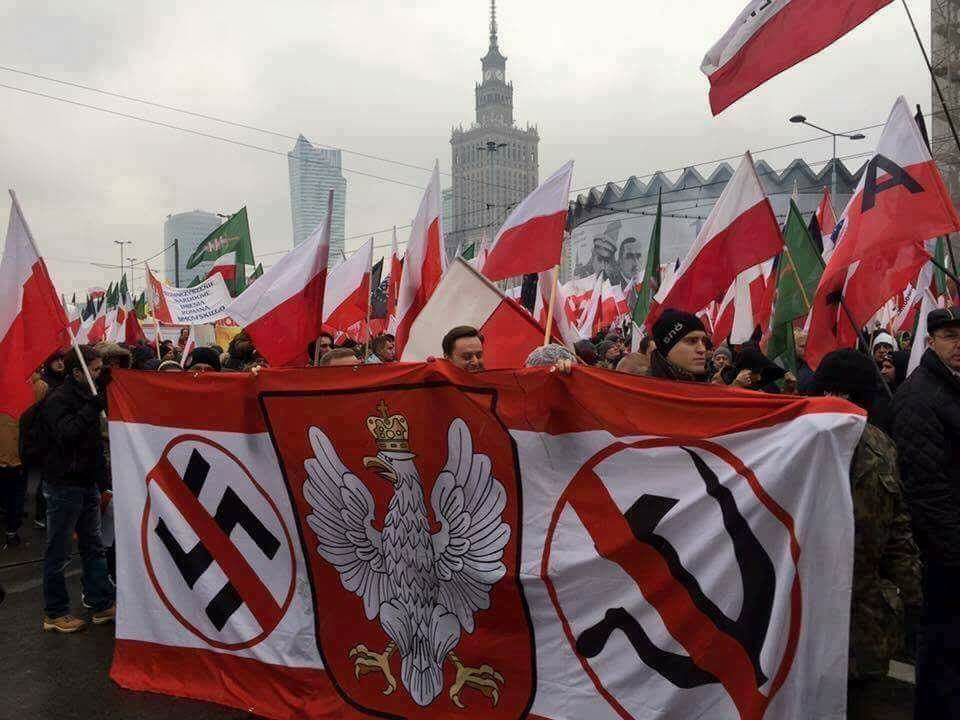 Recently in the United States there has been alot of hatred and vitriol being directed at Poland & Polish Americans, especially from the left wing.  What exactly are they saying & why are they doing this?  Let’s take a walk down memory lane first for some perspective shall we?

Poland historically has been a champion of economic and social freedoms and in the 1700’s its constitution was deemed a threat to the European governing establishment because it allowed so many individual & religious freedoms.  Tyranical governments in Austria-Hungary, Prussia & Russia took part in the partitions of Poland to wipe it off the map.  Poland did not regain independence until over 100 years later after WW1.

After the Polish nation was reborn after WW1 it was a democratic republic and capitalist socieity.  This was a threat to both the Bolshevik communists in the Soviet Union and the Nazi national socialists in Germany.  The Polish nation successfully defeated and fended off the Soviet invaders in the Polish-Soviet War in 1920 and saved Europe from Soviet communism (Lenin’s plan at the time was to take over Europe 1 nation at a time.)  However in 1939, the Soviets signed a non aggression pact with Hitler and agreed to simultaneously invade Poland from both the East & West and divide the nation up between the 2 totalitarian regimes.  During the fighting the “Katyn Forest Massacre” occured where ethnic Poles, Jews, Ukrainians, Belarusians and other Polish nationals were killed by Soviet Officers.  The Soviets,  who would later to their surprise be attacked by Nazi Germany, tried to keep this a secret from the Allies.  At the conclusion of WW2 Democrat President Franklin Roosevelt, who affectionately referred to Soviet Dictator Josef Stalin as “Uncle Joe” did not object to the Soviet Union taking over Poland and installing a puppet communist regime which would not be overthrown until 1989.

Also of note about Polish history when it comes to the left is the absensce of a Polish role in Trans Atlantic slavery.  The English, Dutch, Spanish & Portguesse all owned African slaves and did so in the United States before slavery was abolished.  The only Poles in the US before the end of slavery were vehemently opposed to slavery.  In fact Tadeusz Kosciuszko who has many bridges, streets, schools and monuments dedicated to him across the United States for his role in helping the United States gain independence from England personally asked Thomas Jefferson to free the African slaves with the money from his estate.  Jefferson did not keep this promise unfortunately and the money was squandered and the slaves remained in captivity.  Booker T Washington would learn of this and because of this new knowledge he visited Kosciuszko’s grave in Krakow Poland and put a rose on it to honor him in the name of African Americans.  The first wave of Polish immigration would not come until the late 1800’s after slavery had already been abolished in the United States.  Because of their Catholic faith Polish immigrants were often targets of the Ku Klux Klan.

So what of all this?  Why is the left attacking Polish people?  Because our history is stainless.  We did not particpate in Trans Atlantic Slave trade.  We did not conquer the Native Americans.  We did not perpetrate the Holocaust.  We are Slavic, not Anglo Saxon like the English, Dutch & Germans.  We are not the stereoptypical “whitey” who the left loves to invoke to spread hatred & division with blacks and other racial minorities.  For the left, this is not good.  They MUST find a way to blame us for SOMETHING!  So why not try to whitewash history a bit?  It certainly has worked for the Democratic party in the United States.  The Democrats have successfully convinced many people that the Republicans were responsible for Slavery & Jim Crown when in fact it was the Democrats who started Slavery, Segregation, the Ku Klux Klan &  Jim Crow laws. 2 important Black American leaders who knew the truth were killed by Democrats for speaking out against them (Martin Luther King JR & Malcolm X).  They were replaced by the likes of agit prop con men and Democratic operatives Al Sharpton & Jesse Jackson.  You see today what happens to the likes of Conservative Black Americans Ben Carson and Kanye West when speaking out against the left.  Character assasination to discredit anything they say even when it is the truth.

The left affectionately looks at leaders in the Soviet Union like Vladimir Lenin (his statue stands in liberal Seattle today) and they have adopted many KGB like tactics in repeating lies over and over again until people start believing them.  This includes changing history.  Many of these tactics were also used by American leftist radicals like Saul Alinsky (see his book “Rules for Radicals”).  Recently the left has made some sharp attacks against Poland using these tactics.  The 1st was when Barack Obama used the term “Polish death camps” in a 2009 speech about Nazi concentration camps.  The 2nd was much more recent.  Tammy Baldwin (Democrat Senator from WI) sponsored the “Just Act” S447 & Joseph Crowley (Democrat Congressman from NY) sponsored the bill HR1226 which seeks to “compensate heirless property survivors” of the Holocaust.  Now do you think Germany is being asked to repay?  Nope!  The bill is aimed at Poland!  Poland who was not responsible for the Holocaust is being blamed and extorted by this bill via political pressure.  American Jews under this bill can make claims to money & property against Polish citizens and the Polish government of today, neither of who had any responsibility for the Holocaust.  Poland, already compensated American Jews (even though they were not at fault) back in 1960.  Apparently this is not good enough for the left.  The left also objected to Poland passing a bill in 2018 that makes it illegal in Poland for someone to blame the Polish state for the Holocaust and Nazi German war crimes.  Recently Mayor of Jersey City Steven Fulop who wants to remove the Katyn Forest Massacre Monument from Jersey City called Poles “antisemites”, “white nationalists” and “Holocaust deniers” for passing the bill.  His comments were directed at Polish Senate leader Stanislaw Karczewski (on twitter nonetheless).  Fulop is now being sued by the Polish Senate leader for slander & defamation and has gotten himself into a ton of hot water with the Polish Amabassador to the United States, Washgington officials and officials in New York for his baseless accusations and racist comments/hate speech.

So all in all what is at stake here is not only the presersvation of history but the preservation of the good name, reputation and image of the Polish & Polish American people.  The left has successfully demonized groups in their way, beginning with the demonization of Black Americans to incite hatred among whites in the 1800s through the 1960’s to the demonization of White Americans over the last 50 years to incite hatred among Black & Hispanic Americans.  Who are the only people left standing in the way now?  The Slavic Poles.  With a strong Catholic faith, a clean history,  a love for Freedom and staunch opposition to socialism & communism.   Poland also rejected the influx of Syrian refugees much to the dismay of leftists in the United States & the EU namely Germany & Italy.  We Poles are a problem for the left and in the words of Josef Stalin before the Polish Soviet War of 1920 “must be liquidated”.

4 comments on “The left’s new target is Poland & Polish Americans. Here is why.”

This entry was posted on May 15, 2018 by HKW in Antypolonizm, Uncategorized and tagged History of Poland, Jason Wisniewski, Leftists, Slavery, Targetting Poland.