KYIV — Thousands of nationalists have marched through Kyiv in a torchlight procession to celebrate Ukrainian fighters past and present on a day that saw a fearsome far-right military force formally enter the country’s political fray.

As dusk fell on the second annual Day of Defenders on October 14, a holiday established following Russia’s seizure of Crimea and interference in eastern Ukraine, marchers lit torches that illuminated the flags of the far-right Azov and Right Sector parties and filled the sky above them with smoke.

The far-right activists chanted “Glory to the nation!” and “Death to enemies!” as they wound their way from the capital’s towering Mother Homeland statue to St. Sofia Square.

It was a show of force for the ultranationalist groups, in particular for Azov, whose ranks have served as perhaps Ukraine’s most formidable fighting force in the war against the separatists that has killed more than 9,600 people since April 2014.

WATCH: Footage From A Day Of Defenders Rally In Kyiv

The march under torchlight capped a day in which Azov, formerly a volunteer militia but now included in the National Guard, officially became a political party.

Credited with recapturing the strategic port city of Mariupol from separatist forces, the Azov battalion has also been accused by human rights groups of torture and even war crimes during the conflict. Other detractors believe the group’s far-right ideology and militancy could pose a threat to President Petro Poroshenko and the stability of the state.

Some of the marchers wore facemasks adorned with skeletons and the Azov symbol — an emblem similar to the Nazi Wolfsangel that the group claims is actually comprised of the letters N and I, meaning “national idea.”

“Putin’s a d***head!” some chanted, referring to Russian President Vladimir Putin, whose military and security services clandestinely seized and annexed Ukraine’s Crimean Peninsula and have backed the separatists in the east of the country.

‘Several Ways Of Coming To Power’

At an inaugural party congress earlier in the day, Azov’s new political leaders told some 400 delegates and attendees — many dressed in military fatigues — that the party would work to defend Ukraine against Russian aggression. They also elected parliament member Andriy Biletsky as party leader for the next four years.

Azov’s platform calls for amending Ukraine’s constitution to expand presidential powers, allowing him or her to serve as commander in chief of the armed forces as well as head of state.

It also backs the restoration of Ukraine’s nuclear power status, the nationalization of companies that were owned by the government when Ukraine gained independence in 1991, and the legalization of firearms for personal protection.

“All citizens who receive permission will be allowed to own and carry pistols,” the party platform states.

Its foreign policy seeks to sever cultural, diplomatic, and trade ties with Russia while building a Baltic and Black Sea Union comprised of other neighboring nations.

The party also urged a public discussion about restoring the death penalty in Ukraine for crimes such as treason and embezzlement of government funds.

Nazar Kravchenko, an Azov party leader, told the Hromadske news site that he hopes the party will give the group greater political influence.

“There are several ways of coming to power, but we are trying something through elections,” he said. “But we have all sorts of possibilities.”

Azov is not the first far-right group to enter Ukraine’s fractious political arena. Both the Right Sector movement and the nationalist Svoboda party have tried their luck in politics but failed to reach the 5-percent threshold needed to enter parliament in October 2014 elections.

In May 2014, the parties’ presidential candidates finished near the bottom of the polls.

The Fatherland party of former Prime Minister Yulia Tymoshenko is currently the country’s most popular political party with the support of 6.3 percent of Ukrainians, according to a recent poll by the Kyiv International Institute of Sociology.

Fatherland is followed by the ruling Petro Poroshenko Bloc at 5.9 percent.

Azov was not included in the poll because it had not yet been established as a political party.

Ukraine risks falling into chauvinism and even far right historical revisionism in its drive to create a new national mythology. If left unchecked, such backward and retrograde impulses might even compromise Kiev’s campaign to recruit foreign support within the current and highly charged political milieu.

The Ukrainian far right has played an influential role on the eastern front where many fighters have joined volunteer battalions. Enthralled by controversial iconography, some of these battalions even sport Nazi insignia harking back to the Second World War, when some Ukrainians collaborated with the Germans.

Worst of all, mainstream politicians seem more intent on capitalizing or even embracing extreme nationalism rather than condemning such tendencies.

Ukraine’s wartime record — as well as the political right’s efforts to airbrush history while overlooking inconvenient truths — could complicate moves to foster key diplomatic ties. Take, for example, contentious historic relations between Ukraine and neighboring Poland. In 1941, when the Germans invaded western Ukraine, local anti-Soviet partisans associated with controversial Stepan Bandera pressed for an independent state. The following year, the OUN (Organization of Ukrainian Nationalists) created the UPA or Ukrainian Insurgent Army. In the name of fighting for independence, the UPA fought against Polish, Soviet and Nazi forces at different times.

UPA carried out a series of massacres in 1943-44 in eastern Galicia and the disputed Volhynia or Volyn region in Nazi-occupied southeastern Poland [currently, Volhynia is located within the borders of western Ukraine].

Anticipating the creation of an independent Ukrainian state after the war and the implementation of a possible plebiscite, the UPA hoped to wipe the slate clean by carrying out ethnic cleansing. In an effort to drive out the Polish citizens of Volhynia, the OUN and UPA killed tens of thousands of Poles in a brutal scorched earth campaign. The casualties included men but also women, children and the elderly. In grisly fashion, the UPA hacked Polish victims to death and drowned others in local wells. At one point during the atrocities, the UPA wiped out a whopping 10,000 people in one day!

It was a GENOCIDE !

Throughout the atrocities, Ukrainian partisans seized Polish lands, houses, all Polish wealth and redistributed them to ethnic Ukrainians. Ukrainian brutality provoked fierce Polish countermeasures, with partisans of the anti-Nazi and anti-Soviet Home Army (AK) killing 20,000 Ukrainian bandits, not civilians.  Today, there are still some Poles living in Western Ukraine, but in very few numbers. Indeed, in the wake of World War II most Poles moved out of what was then Polish land for centuries.

In all, the violence displaced some 1.5 million people. To this day, Ukrainians refer to Volhynia as a “tragedy,” while Poles call it a massacre. Poles meanwhile hold a somewhat idealistic view of their eastern borderlands or Kresy, which included Volhynia. Supposedly, the Kresy was historically comprised of quaint villages where many ethnic minorities lived in harmony. This was disturbed, however, by “the axes and pitchforks” of Ukrainian nationalists, who also killed Czechs living there, Romanians, Dutch and Russians.

Though former Ukrainian President Leonid Kuchma traveled to Volhynia to commemorate a memorial to ethnic Poles who had been murdered by the UPA, he refused to issue a formal apology for wartime massacres. Another Ukrainian President, Viktor Yushchenko, was little better: in 2010, he awarded wartime nationalist leader Stepan Bandera the title of “Hero of Ukraine.” Critics charge that Yuschenko successor Viktor Yanukovych was little better and turned a blind eye to historic injustices.

The problem, experts explain, is that young Ukrainians have little knowledge of the Volhynia massacres since the issue was blocked out not only by post-war Soviet propaganda, but also by the perpetrators trying to keep it in secrecy for as long as possible. If anything, the recent EuroMaidan movement which toppled Yanukovych has only served to bring the far right out of the shadows.  Just like before, mainstream politicians serve to legitimate the far right and most recently President Petro Poroshenko passed laws, which would make it illegal to express “public contempt” against UPA veterans.

Dozens of scholars on Ukraine protested the measures, remarking that the legislation would make it “a crime to question the legitimacy of an organization (UPA) that slaughtered tens of thousands of Poles in one of the most heinous acts of ethnic cleansing in the history of Ukraine.” Bolstered by such mainstream support, the far right seems to have become emboldened.

On the eastern front, one volunteer unit fighting Russian-backed separatists calls itself the OUN Battalion. Needless to say, the Ukrainian Diaspora has been reportedly supporting rightist volunteer battalions whilst offering up historic wartime apologetics.

The OSCE (or Organization for Security and Cooperation in Europe) has grown concerned about the Ukrainian far right. Recently, the group expressed alarm  as monuments of the murderer, Stepan Bandera  are set up in the western Ukrainian city of Lviv, and almost all over Ukraine.

Most Polish politician are none too pleased with Ukraine’s romantic obsession with its wartime past.  How extreme will politics have to get before the Ukrainian establishment stands up to the far right? If the political mainstream doesn’t act soon, Kiev’s relationships with key diplomatic partners and even Poland could be severely tarnished. 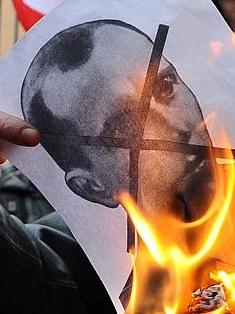 This entry was posted on October 18, 2016 by HKW in Uncategorized and tagged Awakening of the ukrainian Beast, Genocide of Poles by ukrainian UPA, Ukraine, Ukraine's Neo-Nazi Azov Battalion Establishes a Political Party, UPA.