ANGELA Merkel waded headfirst into the Brexit debate by warning Britain it “won’t get a good deal” if people vote to leave the European Union on June 23.

The German Chancellor said her country “works well” with the UK in Europe, and warned that our influence will be diminished if we quit the 28-nation bloc.But senior Eurosceptics said her comments betrayed the “panic” engulfing David Cameron’s ‘Project Fear’ camp, adding that she should have stayed out of the democratic debate.

Speaking to reporters in Berlin yesterday the beleaguered German leader – whose popularity has plummeted over her disastrous handling of the migrant crisis – said Britain staying in the EU would be “for the benefit of all of us”.

And in a thinly veiled threat to voters she said that countries outside the Brussels club “never really get a good result in negotiations” – a proclamation that echoes Barack Obama’s claims Britain would be “back of the queue” for a trade deal.Mrs Merkel said: “Obviously, it is up to the citizens of the UK themselves how they wish to vote on the upcoming referendum. I’ve said repeatedly before that I personally would hope and wish for the UK to stay part and parcel of the EU.

“We work well together with the UK particularly when we talk about new rules for the EU.

“We have to develop those together with the UK and whenever we negotiate that, you can much better have an influence on the debate when you sit at the bargaining table and you can give input to those negotiations and the result will then invariably be better rather than being outside of the room.

“It would be not only be in our interest but it could also be in the interest of Britain when it can bring its whole political weight to the negotiating table as part and parcel of the EU.”

But her comments were immediately leapt upon by Eurosceptics, who branded her the latest Euro elite stooge drafted in by Mr Cameron to try and scare British voters.Boris Johnson said the ‘Project Fear’ doom mongers had “hit the panic button” and called in Mrs Merkel amid a groundswell of support towards voting for Brexit.

And Labour MP Kate Hoey, who is campaigning to leave, said the German leader would be “well advised to stay out of what is a very, very important vote for British democracy”.

She blasted: “It is in Germany’s interests for the UK to stay in. That doesn’t mean that it is in the UK’s interests.

“I really don’t think that Angela Merkel telling the British people how they should vote in a democratic referendum in three weeks time will affect anyone’s vote.

Mrs Merkel’s intervention comes just days after Bundestag sources indicated that the Chancellor was unlikely to stick her nose into the Brexit debate.

The German leader has become a figure of ridicule across the globe – and not least in her own country – for her disastrous handling of the EU migrant crisis.

Her comments are the latest doomsday message from EU leaders who are increasingly worried about losing the £350 milliongross figure that Brussels syphons off from British taxpayers every week.

On Wednesday, Dutch PM Mark Rutte warned Brussels would look to take revenge on Britain if we were to implement a points-based immigration system.

And Spanish PM Mariano Rajoy said that the consequences of an exit vote would be “very negative for British citizens”, ludicrously claiming UK passport holders may no longer be allowed to travel to the continent.

The UK pays more into the EU budget than it gets back.

Every British person pays £500 a year to stay in the EU (that’s after all the sums are done and we are given back some of the billions we pay in – these are even BBC figures!). This will increase once the Ukraine joins. Britain pays 350 million pounds A WEEK to the EU.

Each year the UK gets an instant discount on its contributions to the EU—the ‘rebate’—worth almost £5 billion last year. Without it the UK would have been liable for £18 billion in contributions. 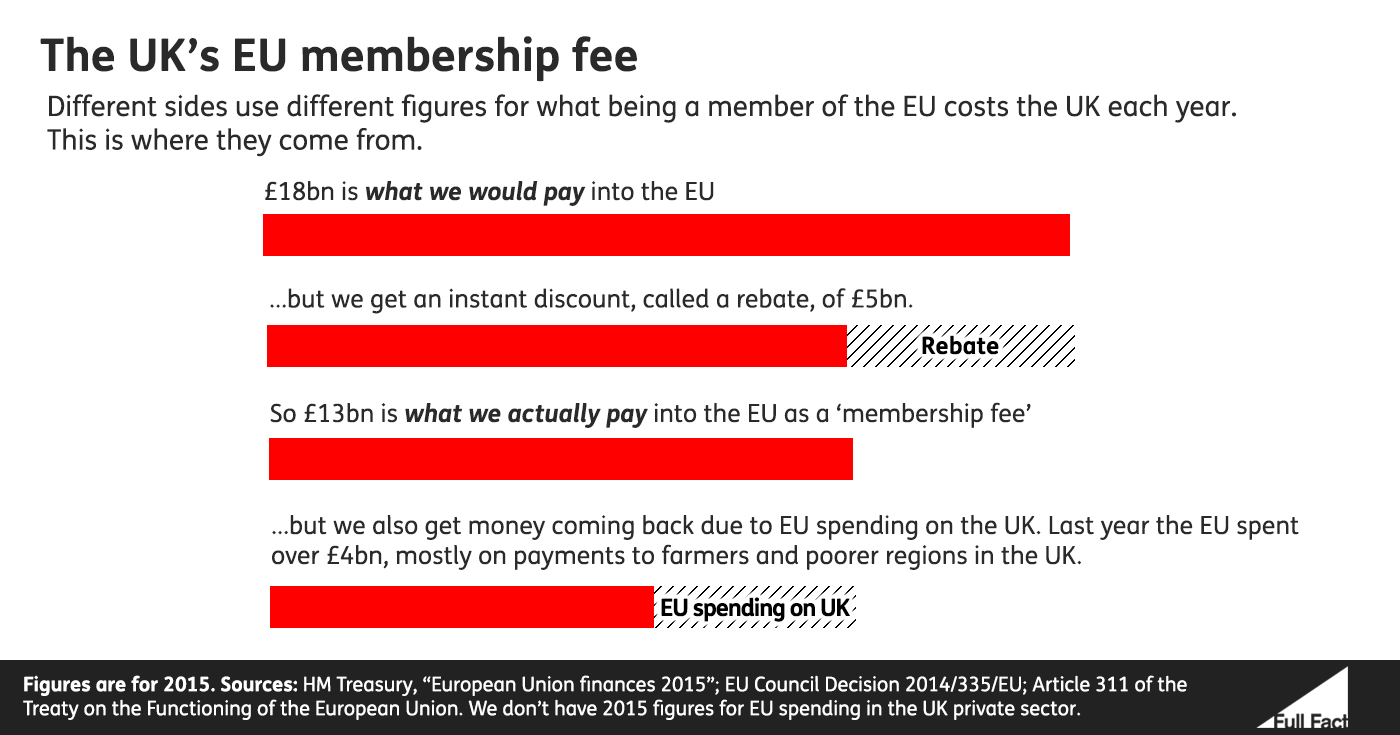 The UK doesn’t pay or “send to Brussels” this higher figure of £18 billion, or anything equivalent per week or per day. The rebate is applied straight away, so the UK never contributes this much.

The UK’s contributions to the budget vary from year to year. They’ve been larger recently than in previous decades. 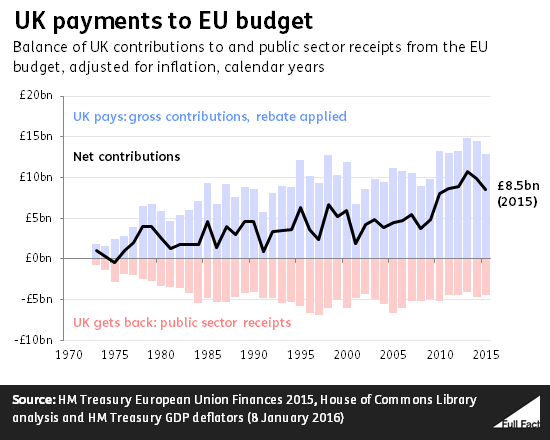 Being in the EU costs money but does it also create trade, jobs and investment that are worth more?

We can be pretty sure about how much cash we put in, but it’s far harder to be sure about how much, if anything, comes back in economic benefits. “There is no definitive study of the economic impact of the UK’s EU membership or the costs and benefits of withdrawal”, as the House of Commons Library says.

The claim that the UK’s membership fee is £55 million a day comes from the £20 billion annual UK payment to EU institutions listed in the Office for National Statistics’ (ONS) Pink Book.

The ONS told us this isn’t the correct figure to use. It has another set of figures which actually represent official government payments, although this isn’t clear from the release.

The £20 billion figure includes payments to EU institutions by UK households, and so doesn’t represent what the government pays as a ‘membership fee’.

The Treasury has more up to date estimates than the ONS, and uses slightly different accounting methods. They show we paid in £13 billion in 2015.

We previously said that “it’s reasonable to describe £55 million as our ‘membership fee’, but it ignores the fact that we get money back as well.”

This was based on the understanding that the rebate is paid up front and then sent back, which we now know is wrong.

It’s also been claimed that we send £350 million a week to the EU. That also misses out the rebate, although is based on better figures for the UK’s contributions.

£350 million is what we would pay to the EU budget, without the rebate.

But the UK actually pays just under £250 million a week.

The UK Statistics Authority has said the EU membership fee figure of £19 billion a year, or £350 million a week, is “not an amount of money that the UK pays to the EU each year”.

£500 billion cost since joining the EU has the same problem

A further claim is that, if you add up the UK’s payments to the EU budget since 1973, we’ve contributed nearly £500 billion in total.

It uses the correct ONS figures on official contributions, although the ONS published slightly revised figures earlier this week. It also factors in inflation to reflect the rise in prices over the last four decades.

But it still doesn’t account for our rebate, so doesn’t represent what we have actually paid. Applying the discount reduces the figure to about £380 billion, or £9 billion a year.

The UK gets money back

The government then gets some of that money back, mainly through payments to farmers and for poorer areas of the country such as Wales and Cornwall.

The Treasury figures note payments the EU makes directly to the private sector, such as research grants. In 2013, these were worth an estimated £1.4 billion, so including them could reduce our net contribution further still.

The money we get back will be spent on things the government may or may not choose to fund if we left the EU. It’s not enough to look at the net contribution in isolation because what we get back isn’t fully under our control.

The Treasury’s European Union Finances release provides the best figures for the UK’s contributions to the EU budget, according to the ONS.

The Treasury and ONS both publish figures on the subject, but they’re slightly different. The ONS also publishes other figures on contributions to EU institutions which don’t include all our payments or receipts, which complicates matters.

The ONS figures ultimately come from the Treasury, and the numbers aren’t the same because they categorise and account for the payments differently.

The European Commission is still another source of information which shows lower contributions.

We replaced the original article from 2014 with a more detailed explanation. We’ve corrected what we said about the claim that the UK’s EU ‘membership fee’ is £55 million a day, as noted in the text above.

We’ve added the UK Statistics Authority’s views on the claim that we send “£350 million a week” to the EU.

Yet again, the German leaders prove their historical arrogance, aggressiveness and the desire for European dominance.