Against a background of wave of outrage after another defamatory attack on Poland by Polish – Jewish sociologist Jan T. Gross, we present an analysis by author Jan Peczkis regarding the Jedwabne massacre. To this day, that never-fully-investigated atrocity serves to the ignorant as basis for claims of alleged Polish anti-Semitism.

IN THE “NEIGHBORHOOD” OF JEDWABNE is the English-language translation of WOKOL JEDWABNEGO. I review these two volumes because the results of Poland’s IPN (Institute of National Remembrance) investigation that have been widely misrepresented and iconized by the media.
Owing to the breadth of the content of these volumes, I focus specifically on the barn burning of Jews, and on questions regarding the credibility of the outcomes of court cases early in Communist rule over Poland. Because so much has already been written about Jedwabne, I strive to draw my own conclusions instead of repeating those of others. 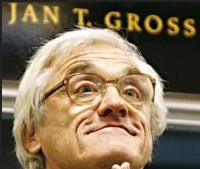 WHAT JAN T. GROSS CLAIMED
In his NEIGHBORS, neo-Stalinist Jan T. Gross had asserted that Poles, acting freely and alone, and with the Germans present only as spectators and photographers, herded the Jews of Jedwabne into a barn and burned them alive. (This is crucial. Gross has tried to back-pedal a bit from his original statements.)

WHAT THE IPN INVESTIGATION ACTUALLY FOUND
The fact that the IPN did NOT „prove Gross correct” is evident from the following English-language summary statement by investigator Pawel Machcewicz, (quote) Another controversy surrounds the role of the Germans who were present at Jedwabne on July 10, 1941. The available sources show that there was a total of between ten and twenty German (gendarmes and Gestapo) functionaries. Violence may have been used against the Polish residents, but at the same time, many of the sources suggest it was relatively easy to avoid the role that was being forced on them. The testimonies varied and none of the participants or witnesses could have included all of what had occurred. AS A RESULT, IT IS IMPOSSIBLE TO DETERMINE CONCLUSIVELY JUST WHAT THE GERMAN ROLE ACTUALLY WAS IN THAT LAST, MOST TRAGIC PHASE–THE BURNING ALIVE OF JEDWABNE’S JEWISH RESIDENTS IN THE BARN. The sources present contradictory and imprecise descriptions of the Germans’ behavior, and historians’ assessments also vary greatly. (unquote). (Volume 1, p. 491; emphasis added. For elaboration, see also Vol. 1, pp. 48-49).
Let us analyze the quoted statement just as it stands. The fact that the German role during the burning of the Jews in the barn „is impossible to determine conclusively” should alone suffice as an acquittal of the Poles. In addition, the fact that German gendarmes and Gestapo „may have used violence” against the Poles, who, in any case, were in a role that was „being forced upon them”, alone is conclusive. It soundly refutes Jan T. Gross’ contention that the Germans at Jedwabne were there merely as observers and photographers. In addition, the fact that the Poles’ role admittedly was „being forced upon them” (easy to escape or not), refutes Gross’ accusation that Poles were acting on their own, much less voluntarily!

IS POLAND GUILTY UNLESS PROVEN INNOCENT?
Now consider the fact, acknowledged by Machcewicz (Volume 1, p. 489), that historians have much more freedom to draw conclusions on events than do prosecutors in criminal proceedings. However, we are not here dealing with a matter of abstract academic discourse. Owing to the fact that Poland has been savaged in the media, and Jedwabne is being used against Poland, she is, for all practical purposes, essentially a criminal defendant. According to American law, the defendant does not have to prove innocence: The prosecutor has to prove guilt beyond a reasonable doubt. Very clearly then, based on the inconclusive responsibility for the barn-burning of Jews, which is obvious from the Machcewicz quote above–and furthermore all based on this IPN study which the media has elevated to EX CATHEDRA–Poland’s critics have most certainly NOT proved her guilt anywhere nearly beyond a reasonable doubt. Therefore, Poland is NOT GUILTY.

WHO LIED? PROVE IT!
In attempting to assess the degree of German coercion of Poles, Machcewicz (Vol. 1, p. 50) contends that the Polish defendants may have lied about German threats in order to reduce their culpability. How are we supposed to determine this? To begin with, the fact that none of the Polish defendants mentions any Germans taking part in the torching of the barn (Vol. 1, p. 50) argues against the Polish defendants inventing German involvement as a means of escaping guilt. On the other hand, if those Poles saying that the Germans threatened them are lying, then why should the investigator believe anything else they say? In any case, insinuations about the defendants lying about German threats cannot merely be stated. They must be proved, and they have not been. Therefore, the statements about German threats stand, and add to the reasonable doubt about Polish guilt.

WHAT POLISH CONSENT?
Incredibly, Machcewicz (Volume 1, p. 50) actually argues that the defendant’s statements about successfully fleeing and hiding from the Germans proved the ease of avoiding the killing of Jews. This is an egregious non sequitur. Common sense tells us that, if one is free to act, or at least perceives oneself to be free to act, then one does not run away! If one senses no adverse consequences from one’s actions, one does not hide!
Escape is not synonymous with consent! The mere fact that a girl or woman escapes or fights off an attempted sexual assault does not prove that she was in a position to give consent. The whole notion that Poles were in a position of choice regarding the killing of Jews is dubious, even in the event of complete absence of force, or threat of force, by the Germans. The German-Polish relationship was anything but that of colleagues or equals. The German-Polish relationship was unmistakably that of conqueror and conquered, powerful and powerless, UBERMENSCHEN and UNTERMENSCHEN, order-giver and order-fulfiller, etc.

THE GERMAN–NOT POLISH–LEADERSHIP
Machcewicz cites certain defendants who attribute their role in the barn burning to direct orders from Karol Bardon. (Vol. 1, p. 50-51). He was a Volksdeutsche (Polish-speaking German), not native to Jedwabne, who had been appointed town mayor by the Germans. An updated, and English-language, account of the Jedwabne Polish defendants can be found by going to, and reading, the detailed Peczkis review of [[ASIN:1845208250 Facing the Catastrophe: Jews and Non-Jews in Europe during World War II (Occupation in Europe)]].
What about the German-eye view of events? Nothing has been found in the archives that has direct bearing on the murderous events at Jedwabne. (Edmund Dmitrow, Vol. 2, p. 987). Jan T. Gross has argued that this points to solitary Polish guilt. It does no such thing. Gross is engaging in an argument from silence with a vengeance!

OVERLOOKED JEWISH SOURCES
A number of the authors of this investigation elaborate on Jewish sources. It is difficult to disentangle eyewitness accounts from hearsay. There are additional Jewish sources–ones which point to the Germans, and not the Poles, as the main killers of Jedwabne’s Jews. On Amazon.com, go to the boo, THE WARRIORS: MY LIFE AS A JEWISH SOVIET PARTISAN, read the detailed Peczkis review therein, and then click on the link within this review to another such Jewish source and its detailed Peczkis review. These testimonies, especially coming as they are from non-friendly witnesses, further add to the reasonable doubt about Polish guilt.

STALINIST TERROR: HOW COULD THE 1949 TRIALS HAVE BEEN FAIR?
Andrzej Rzeplinski attempts to assess the degree of Communist coercion in the 1949 Jedwabne trial. He notes that defendants claimed to be beaten–a claim he considers unproved, but well within the character of common U. B. (Bezpieka) conduct. (Vol. 1, p. 405). Andrzej Zbikowski (Vol. 1, p. 163) also recognizes the fact that the defendants were coerced and beaten, but would have us believe that this does not matter. Rzeplinski cites several technicalities by which the Jedwabne trials do not constitute Stalinist show trials. However, he admits that the political climate did influence the trial. (Vol. 1, p. 457, 499). What an understatement! How could there have been a semblance of a fair trial in the light of the following: The faked elections that had officially brought the Communists to power, the frequent „disappearances”, arbitrary murders, and very frequent arrests and imprisonments?

SCOPE OF THE 1941 „POGROMS” UNDER GERMAN OCCUPATION
How many Poles were actively involved, consensually or non-consensually, in the killing of Jews at Jedwabne? Jan T. Gross claimed „half the town”. Prosecutor Radoslaw Ignatiew suggested „at least 40.” Based on an analysis of the prosecution, historian Tomasz Strzembosz cited 23. (Machcewicz, Vol. 1, p. 56).
What about other pogroms in the Lomza District? The media-promoted notion that this IPN investigation has demonstrated Polish pogrom conduct at „many places” is shattered by Machcewicz, who comments, „The events in Jedwabne and Radzilow are unusual in the context of other anti-Jewish excesses in the region–not only because of their scale and methods, but also because Poles played an active role there. In most places where such events took place, the Germans’ participation is indisputable, and clearly more important than their role in both those towns.” (Volume 1, p. 491). [Were Jedwabne and Radzilow unusual because the German role was small, or were they unusual because, of those two locations out of many, the Poles were successfully framed and the Germans happened to be successful in escaping much of the blame?]

“Repeat a lie a thousand times and it becomes the truth.”

This entry was posted on October 16, 2015 by HKW in Anti-polonism and tagged Germans, Jedwabne, Jews, Nazis, Poland, WW2.