The present danger of thermonuclear World War III erupting from the West’s targeting of Russia has met stiff opposition from 60 prominent Germans in a full-page advertisement in the current issue of the prestigious Die Zeit weekly (http://www.zeit.de/politik/2014-12/aufruf-russland-dialog) in Germany last Friday.

Under the headline “War in Europe Again? Not in Our Name!”, the declaration calls for a new policy of détente in Europe and asserts Russia has as much of a right to feel secure as do Germans, Poles and others in Europe.
While Chancellor Angela Merkel continues to accept and participate in London and Washington’s confrontation course with Russia, these 60 signers warn such conflict is fraught with danger and identify the historical precedent: “We must also not push Russia out of Europe. … Since the Congress of Vienna in 1814 Russia has been a recognised global player in Europe. All who have tried to change that have failed violently, the last being the megalomaniac Germany of Hitler, which in 1941 with murderous intent set out to subjugate Russia.”
The 60 resolution signers are prominent figures in politics, science, and culture, including former Chancellor Gerhard Schröder; former German President Roman Herzog; former Chancellery Minister Horst Teltschik; former Undersecretary of State of the Defence Ministry Walther Stützle; present Chairman of the Committee on Eastern European Economic Relations (Ost-Ausschuss) Eckhard Cordes; as well as leading dissidents among the media such as Gabriele Krone-Schmalz and former chairwoman of the Evangelical Churches association Margot Kässmann.
Australian and Western media have blacked out this powerful anti-war declaration and continue sabre-rattling anti-Russian war propaganda.

Veteran Australian-British journalist John Pilger last Friday blasted this controlled media: “The world is facing the prospect of major war, perhaps nuclear war—with the United States clearly determined to isolate and provoke Russia and eventually China. This truth is being turned upside down and inside out by journalists, including those who promoted the lies that led to the bloodbath in Iraq in 2003”, he said in an address to the Logan Symposium in London.
http://johnpilger.com/articles/war-by-media-and-the-triumph-of-propaganda
Pilger exposed even the nominally “liberal” newspapers, The New York Times, The Washington Post and The Guardian to be complicit in war propaganda alongside Murdoch’s empire: “All three liberal newspapers have misrepresented events in Ukraine as a malign act by Russia—when, in fact, the fascist led coup in Ukraine was the work of the United States, aided by Germany and NATO.”
“The suppression of the truth about Ukraine”, continued Pilger, “is one of the most complete news blackouts I can remember. The biggest Western military build-up in the Caucasus and eastern Europe since world war two is blacked out. Washington’s secret aid to Kiev and its neo-Nazi brigades responsible for war crimes against the population of eastern Ukraine is blacked out. Evidence that contradicts propaganda that Russia was responsible for the shooting down of a Malaysian airliner is blacked out.”

On 4 December the US House passed H. Res. 758 titled “Strongly condemning the actions of the Russian Federation, under President Vladimir Putin, which has carried out a policy of aggression against neighboring countries aimed at political and economic domination.” Effectively a declaration of war against Russia, this should send chills down the spine of every thinking person on the planet. Former Republican Congressman and Presidential Candidate Ron Paul—one of the few US politicians to oppose the lies of Saddam’s weapons of mass destruction—denounced H. Res. 758: “Today the US House passed what I consider to be one of the worst pieces of legislation ever. …the bill was 16 pages of war propaganda that should have made even neocons blush, if they were capable of such a thing.” As former editor-in-chief of The Moscow News, Robert Bridge stated in RT on 7 December, “Future historians—that is, assuming there are humans still around to contemplate history—may one day point to House Resolution 758 as the single piece of legislation that sparked a global conflagration between two leading nuclear powers.”
In Vladimir Putin’s 4 December Presidential Address to the Federal Assembly, he clearly identified the Anglo-American imperial agenda: “Speaking of the sanctions, they are not just a knee-jerk reaction on behalf of the United States or its allies to our position regarding the events and the coup in Ukraine, or even the so-called Crimean Spring. I’m sure that if these events had never happened … they would have come up with some other excuse to try to contain Russia’s growing capabilities, affect our country in some way, or even take advantage of it. …
http://www.eng.kremlin.ru/news/23341
“Since 2002, after the US unilaterally pulled out of the ABM Treaty, which was absolutely a cornerstone of international security, a strategic balance of forces and stability, the US has been working relentlessly to create a global missile defence system, including in Europe. This poses a threat not only to Russia, but to the world as a whole—precisely due to the possible disruption of this strategic balance of forces. …
“We have no intention to become involved in a costly arms race, but at the same time we will reliably and dependably guarantee our country’s defence in the new conditions. There are absolutely no doubts about this. This will be done. Russia has both the capability and the innovative solutions for this.
“No one will ever attain military superiority over Russia. We have a modern and combat ready army. As they now put it, a polite, but formidable army. We have the strength, will and courage to protect our freedom.”
Fire the chief warmonger!
Victoria Nuland, the Assistant Secretary of State for European and Eurasian Affairs at the United States Department of State must be replaced immediately.

The bill of indictment against Nuland is clear. She has been the point person within the Obama Administration, promoting confrontation with Russia. She was the architect of the regime-change effort in Ukraine over the past year, using neo-Nazi elements from the Right Sector and other Banderist remnants, to overthrow a legitimately elected government; and when the European Union and Russia came close to reaching a diplomatic agreement to clear the Maidan Square in February 2014, and end the violence, she was intercepted telling the US Ambassador in Kiev “f__k the EU.”
Nuland was a key fixture in the Bush-Cheney neo-con regime with its policy of permanent war and permanent regime change. As a career foreign service officer, she was assigned to the Office of Vice President Dick Cheney, as his Principal Deputy Foreign Policy Advisor at the start of the Bush-Cheney administration. In 2005, Bush named her US Ambassador to NATO—coinciding with the unleashing of the first “Orange Revolution” in Ukraine.
Nuland’s husband, Robert Kagan, is another leading neo-conservative, having co-founded the Project for the New American Century (PNAC) and the American Committee for Peace in Chechnya, a Freedom House front that actually promoted the cause of the Chechen rebels against the Putin government during the Second Chechen War. Obama has praised Kagan to the sky, and even referenced his recent essay in his 2012 State of the Union Address.
Australians should contact their federal MPs and demand to know why both Labor and Liberal are supporting a dangerous military alliance with a warmongering Obama administration, leaving the world on the edge of global showdown, including the growing prospect of a thermonuclear war of extinction.
Endorse Helga Zepp-LaRouche’s worldwide anti-war statement: US & Europe: Reject Geopolitics and Collaborate With the BRICS  –  http://cecaust.com.au/main.asp?id=anti-war-petition.html
Do You Want to Defeat Terrorism?

For a free copy of the CEC’s new pamphlet on the economic development basis for a peaceful solution to this crisis:  http://cecaust.com.au/main.asp?id=free_BRICS_pmp.html 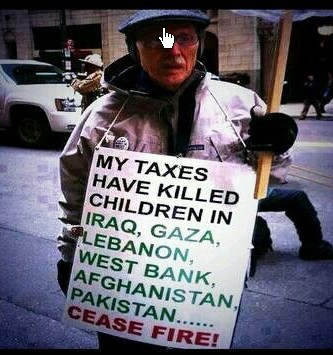 This entry was posted on December 9, 2014 by HKW in Uncategorized and tagged Thermonuclear WWIII.