At the 1958 World Jewish Conference in Geneva, Dr. Nahum Goldman, President of the World Zionist Organization, warned Jews that “a current decline of overt antisemitism might constitute a new danger to Jewish survival… The disappearance of antisemitism has had a very negative effect on our internal life.”

Goldman was not the first Jew to recognize the common ground between Zionists and anti-Semites. In fact, ever since Zionism was invented by a Jewish journalist in the late nineteenth century, Zionist-inclined Jewish leaders have actually cooperated with anti-Semites, including Hitler’s Nazis, in the prevention of Jewish assimilation.

The founder of Zionism, Theodor Herzl, himself entered into negotiations with the anti-Semitic Tsarist Minister of the Interior Plehve, who promised the Tsarist Government’s “moral and material assistance” to the Zionist movement.

In 1937 the anti-Semitic Polish government sent the Michael Lepecki expedition to Madagascar, accompanied by Jewish community representatives, to study the possibility of sending Poland’s entire Jewish population there, in order to set up a Zionist state on the island.

The possibility of setting up a Zionist state on Madagascar (which was in fact first suggested by Herzl himself) also received consideration from the Nazi government. In 1938, Hitler agreed to send the President of the Reichsbank, Dr. Hjalmar Schacht, to London for discussions with Jewish representatives Lord Bearsted and a Mr. Rublee of New York. The plan failed only due to intransigence on the part of the British government.

Another prominent Jewish leader, Haim Arlossorof, Secretary of the Histadrut, was also involved in similar negotiations with the Nazis according to the Protocols of the Knesset of 30.6.59 (the Israeli Hansard).

By the late 1930’s, the German Jews were riding on a new peak of Zionist fervour, courtesy of the Nazi regime. Zionist organizations received three times as much in contributions in 1935-6 as they did in 1931-2, and the circulation of the Zionist weekly Judische Rundschau rose from 5,000 to 40,000. The Editor of the paper was the first to coin and make popular the slogan about the yellow star which Jews were later forced to wear: “Wear it with pride, the Yellow Star!” This was more than six years before Jews were forced to wear the star by law.

There is even a certain amount of evidence to show that Hitler was financed by Jewish interests. In his book, I Paid Hitler, Thyssen admitted that the Nazis themselves had been obliged to recognize the services rendered by the Jewish Simon Hirschland Bank in Essen, which had arranged Wall Street loans for Hitler through another Jewish bank in New York, Goldman Sachs & Co. For a long time no-one dared lay hands on the Simon Hirschland Bank, despite pressure from the extremist element of the Nazi Party.

And during the Nuremberg trials, Hjalmar Schacht requested that a Mr. Jeidels be called from America as a defence witness. According to a war-time edition of Time (3.7.42), Jeidels had been one of Schacht’s closest cronies before the war. Hitler had even let Jeidels act as his deputy at the famous Standstill Agreement. By 1942 he had become a partner in the Jewish Lazard Frères bank in Manhattan, but still “had access to choice Continental pipelines into Hitlerism.”

But probably the most bizarre liaison between Hitlerism and Zionism was in Austria and Hungary, where prominent Jewish leaders actively cooperated with the Nazis in registering the Jewish population and keeping order in the ghettos, in return for allowing the emigration to Palestine of thousands of young Jewish pioneers. The Nazis even agreed to set up agricultural schools for the would-be emigrants in Austria. This entire affair is described in rhapsodical terms in The Secret Roads by Jon and David Kimche, two prominent British Zionists.

They describe how two young Jewish settlers made their way back to Berlin and Vienna in 1938 in order to put the plan to the Gestapo. Adolf Eichmann readily agreed to the scheme, and even expelled a group of nuns from a convent to provide a training farm for young Jewish emigrés. By the end of 1938, about a thousand Jews were being provided with training in these establishments. The two emissaries were allowed to move freely about Germany. They were even allowed to visit internment camps and select the most able Jewish youngsters for training and subsequent passage to Palestine.

Eichmann himself admitted to being a staunch Zionist, ever since he had studied Herzl’s classic, The Jewish State (original title An Address to the Rothschilds) as part of his S.S. training. Eichmann attended, in civilian clothes, the commemoration ceremony of the thirty-fifth anniversary of Herzl’s death. And in 1939 he protested against the desecration of Herzl’s grave in Vienna. In 1937 Eichmann had visited Palestine on the formal invitation of a Zionist official. But he had scarcely arrived in the territory whereupon he was deported to Egypt by the British authorities. In Cairo, he was visited by a representative of one of the Jewish terrorist organizations Hagannah.

Even well into the war, in 1944, Eichmann still liaised with his Zionist friends. He made a deal with Dr. Rudolf Kastner, a leader of the Budapest Jewish community, that several thousand prominent Zionists would be allowed to emigrate to Palestine in return for Kastner keeping order amongst those who were being shipped to concentration camps.

The Kimche brothers paid tribute to Eichmann’s efforts on behalf of the Jews in The Secret Roads. “Eichmann may go down in history as one of the arch murderers of the Jewish people, but he entered the lists as an active worker in the rescue of the Jews from Europe.” They go on to point out that the Zionist agents in Europe regarded the British as “the chief enemy,” not Germany. 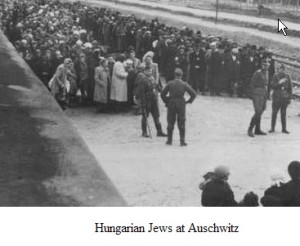 This entry was posted on November 22, 2014 by HKW in Nazis, Zionists and tagged Nazis WW2, Zionists.